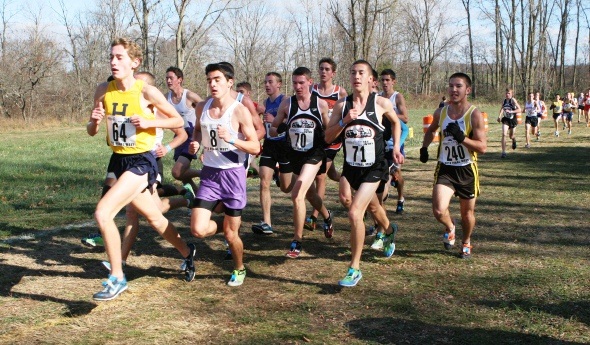 BROOKLYN — Brian Kettle came away with a couple of battle scars to go with his MHSAA championship medal Saturday at Michigan International Speedway.

The Milford junior was bleeding from both knees as he crossed the finish line in the Lower Peninsula Division 1 cross country race with a time of 15:07.3.

Midway through the race, Kettle took a tumble that scraped both of his knees. He got up quickly, but lost ground to a fast lead pack. He patiently took a half mile to catch back up, then made a decisive move with 300 meters remaining to beat runner-up T.J. Carey of Lake Orion by 2.1 seconds.

Kettle made sure he didn’t panic when the unexpected happened in the biggest race of the year.

“I knew I had to stay relaxed; things happen,” he said. “I didn’t let anyone else get too far ahead of me, so I took my time catching back up and tried to run even. It was just enough to scrape the ground and come back up. I was moving forward the whole time.”

Once Kettle regained contact with the lead group, it was time to determine when to make his move. The 2012 Division 1 1,600-meter champion in track and field launched his kick with 300 meters to go down the straightaway in front of the main grandstand at MIS.

The top four runners, as well as seven of the top 10, were from Oakland County. That sense of familiarity was a plus for Kettle.

“A lot of these guys I see in earlier meets throughout the year,” he said. “It was great competing against them at that time, and it’s great coming here with all of them and finding out who’s the fastest.”

Making Kettle’s victory even sweeter was that it led Milford to the team championship. The Mavericks scored 83 points for a comfortable winning margin over Waterford Mott, which had 167. Rockford was third with 186.

Kettle credited his teammates for helping him become an MHSAA champion, as some of his toughest races take place in practice.

“It’s a huge advantage having a good team,” Kettle said. “I love everyone we run with. We’re good friends, even out of the practices. Being able to push each other during races makes it all the better. We’ve got the best training partners in the world.”