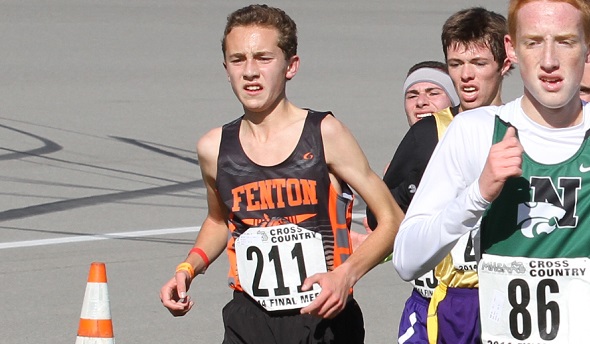 FENTON — Jacob Lee attained a measure of fame last summer through his association with the No. 1 high school distance runner in the nation.

However, the Fenton High School senior gained much more from the experience than an appearance on the cover of a major national running magazine.

When Running Times profiled Grant Fisher in its September 2014 issue, his training partners shared in the glory. The cover of the magazine showed Fisher and five visible training partners doing repeats on a sledding hill at Bicentennial Park in Grand Blanc.

On the far right of the cover shot was Lee, who had trained since eighth grade with Fisher and a group of predominantly Grand Blanc runners led by coach Mike Scannell.

"That was pretty awesome, actually," Lee said. "I saw myself. I knew the article was about Grant. It's still pretty cool to be training with all those high-caliber guys."

Fisher raised the bar incredibly high for the next generation of Michigan high school runners. Having trained daily in the offseason with Fisher, Lee had a unique front-row perspective as Fisher progressed into one of the top high school distance runners ever in this country.

Lee certainly hopes to take the lessons he learned in training with Fisher onto the cross country course this fall and the track next spring. But, beyond that, he will seek to apply lessons learned while training in Scannell's group to other areas of his life.

"It was incredible to train with Grant Fisher and all those guys up at Genesys (Athletic Club in Grand Blanc) with the level they train at," Lee said. "It's not just athletics. They strive to do great in the classroom and the community. That's what I like about it. They have household goals, academic goals. We just strive to achieve them."

One lesson that Lee has learned all on his own is that, no matter how well you've trained and how attainable your goals might appear, strange things can happen in MHSAA Finals.

He was primed to grab a top-30 spot last year after finishing 37th in the Division 1 cross country meet as a sophomore. Things were going according to plan through the mile mark before the race began to unravel for Lee. His body mysteriously betrayed him. Slowing down just a little bit can spell disaster in the Finals, as Lee discovered by dropping to 212th place out of 256 runners with a time of 17:24.3.

"I was feeling good between the first and second miles," Lee said. "I was right on pace. I was in the top 30-40 group. About the second mile, I started cramping up. I don't know what happened exactly. My back kinda tightened up, too. I couldn't move as much. My stride became super short. I'm not really sure what happened that day. I'm just making sure it's not going to happen again."

“I thought the season overall was a great success,” he said. “I wish the state meet would’ve gone better, because I know my fitness level was higher than what I finished.” 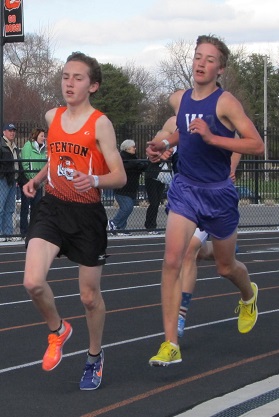 As was the case in cross country, Lee was positioned right where he'd hoped to be. But bad things sometimes happen when so many fast feet are in close proximity. Again, disaster struck for Lee in the biggest meet of the season.

"I tripped and fell with 800 to go," Lee said. "I got spiked in the head, actually. I've still got a little bit of a mark. So, I wish that would've gone better, because I was in the top eight going into the last 800, but there's nothing you can do about that. I was right behind (Davison's) Nick Schmidt, who ended up coming in sixth."

“When I first met Jake, I thought he was someone’s younger brother who happened to be training with the team and Mike’s guys,” Fisher said. “Jake’s always been one of the smaller guys. Because of that, he has to make up for that in his work ethic and intensity at every practice. I definitely have a lot of respect for him because of that. He’s racing against guys who are 6-3, 170 or whatever. Jake’s not the biggest dude. Jake has a focus that is pretty special. He brings his all at every practice.”

While Lee no longer has the Stanford-bound Fisher to push him in training, he will have some strong talent within his own league to keep him sharp throughout the regular season.

Lee's goal is to finish among the top five at the MHSAA Finals, but along the way he hopes to emerge from that speedy trio as the Metro League champion.

"The competition is really high in our own league, so it should be a good race for the individual top spot," said Lee, whose personal best came when he won a talent-laden league jamboree at the Cummings Center in Mount Morris. "All of the league meets are pretty good competition, especially the ones with Clio and Holly. There's no slacking off when it comes to racing those guys, for sure."

Lee also will get a good daily push in practice because of a coaching change that has former Fenton all-stater Jesse Anderson in charge of the cross country program. Anderson was 11thin 2006 and 10thin 2007 at the MHSAA Lower Peninsula Division 2 Cross Country Finals. He still runs at a high level in road races.

“It’s going to be a huge benefit, a huge advantage for us,” Lee said. “Not only does he know what he’s talking about, but he runs. He knows all of this great stuff about running, he owns a shoe store, but he can also run with us and tell by our individual fitness what we’re capable of.”

And what is Lee capable of this season

“It’s pretty limitless, really,” said Anderson, who calls coaching Fenton his “dream job.” “We want to keep him healthy. He’s coming in with a very, very strong base. We’ll see how he responds to training.”

Lee began running in fifth grade with the encouragement of his physical education teacher at North Road Elementary in Fenton.

“We had this thing called Mileage Club at North Road,” he said. “He turned me on to that. I started running. I really liked it. I kept running every single day to get toe tokens. Once you get five miles per card, you get a token. It was a race between me and my friends to get the most tokens. You put them on a shoelace and wear them around; it’s pretty cool.”

As cool as they were back then, a medal from the MHSAA Finals on Nov. 7 would be even cooler.

And for his part, Fisher was glad to see friends like Lee make his Running Times cover.

“I was really happy they picked that picture,” Fisher said. “They were taking all these options for a cover shot. To have that group of guys on the cover was really special, because those are the guys I train with day in and day out. A lot of times, they’ll feature me or Mike.

“Jake is the younger guy, but he’s very dedicated to running. To get him on the cover and the other guys, when they first saw it and had the magazine in their hands, their reaction was pretty cool. It was definitely more special for me. I’d rather have it that way than an individual shot of me.”