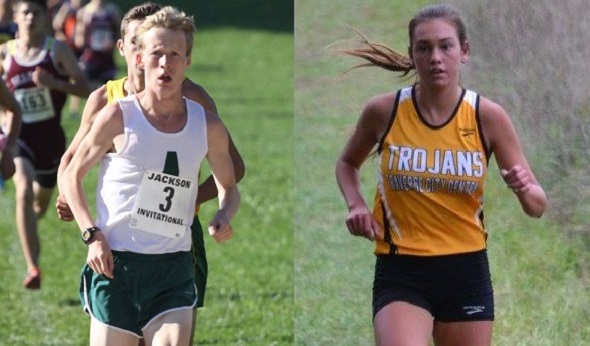 TRAVERSE CITY – After dominating the Big North Conference, and running away with Regional crowns, Alpena’s Mitchell Day and Traverse City Central’s Sielle Kearney are in position to set a new benchmark in northern Michigan.

They will run to become the first northern Michigan runner to win an MHSAA Division 1 Finals individual cross country championship.

Day, 17, and Kearney, 16, will take a shot at titles Saturday at Michigan International Speedway.

Day placed second in the boys race a year ago, finishing three seconds behind Rockford’s Isaac Harding. Kearney was fourth in the girls race.

“I just want to give it all I have,” Day said. “It’s my last year. I’m looking forward to competing, running fast, running strong, running smart, doing what I can. Ultimately, the goal is to win, and that’s been on my mind since the start of the season. I’m the fastest returner (from last year), but that doesn’t mean anything right now.”

Like Day, Kearney is focused on putting forth maximum effort – and letting the chips fall where they may.

“My goal is to do the best I can and know that when I finish I’ll have nothing left, that I’ve given everything, and raced my hardest,” she said.

Day, who has given a verbal commitment to Wake Forest, has won all but one race this fall, finishing second to Corunna’s Noah Jacobs in the Spartan Invitational. Rockford’s Cole Johnson, who was third in last year’s Division 1 meet, finished third at MSU.

“How fortunate for (Sielle) that she has finished ahead of them in other meets this season, because that all goes on your check list when you’re at the start line,” Central coach Lisa Taylor said.

Day led Alpena to its first boys Regional title in school history last Saturday. The Wildcats, who are in the MHSAA Finals for the first time since 1999, swept the top three spots. Identical twins Aden and Josh Smith followed Day across the finish line.

Day, in fact, ran with Josh Smith, who was seeded fifth, early in the race. His intent was to set a pace for his teammate, and encourage him, knowing that Smith’s placing would be important in the team score.

“I told them you don’t know how powerful that was for the three of you to be running in front, talking to each other, while everybody else was struggling to keep up,” Alpena coach Joy Bullis said. “It was a perfectly executed plan.”

Day was more excited about his team’s victory than his personal accomplishment.

“It’s really cool in my senior year to have the whole team be there (MIS) with me,” he said. “That’s something I’ll always treasure.”

“I’m really happy with how our team has been doing,” Kearney, a junior, said. “I love how close we are and how well we work together.” 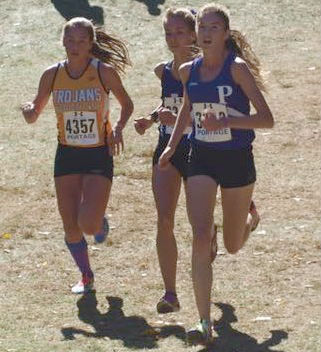 “We have some really hard-working runners on this team who have worked their way up to the top,” Taylor added “They’re doing well, but we’re so lucky to have a No. 1 (like Kearney).”

Taylor, who is now in her 23rd season as head coach, has led the Trojans to 18 top 10 finishes – and 13 finishes among the top four. Central has won one MHSAA Finals title and finished second three times during her tenure. Her teams traditionally peak at MIS. Still, Taylor said it’s still a challenge “to get all these kids to run the best they can on one day.”

“I feel like every year I learn so much more,” she said. “It’s never going to be a moment where I think, ‘I’ve got it all figured out now.’”

“Most of the time when I look up at the (results) board (at MIS) it’s been, ‘Yes, we did it. This is exactly what we’ve been working for all season,’” she said. “There’s maybe been two times where I’ve looked at it, turned around, walked away, thinking, “Darn, we didn’t do it this time.’”

Kearney said her strategy Saturday will be simple.

“After the gun goes off, your main goal is staying up there, staying in the front pack, and focusing on passing as many people as you can,” she said.

“She realizes every race is like a unique journey,” Taylor added. “You really can’t prepare for what’s going to happen. You have to adjust to whatever does happen. That’s one of her greatest strengths – to be able to enjoy it and adjust. She has that wonderful trait in that she loves to race; she loves the hurt, the pain in running hard. Some people might hear that and think that doesn’t seem healthy. But it’s just the nature of our sport. You have to endure pain for such a long period of time. In another sport, you might only have to do it for three seconds and it’s over. With distance running, you go in knowing that you’re in for 18 to 20 minutes of non-stop pain. Some never master it. She just came (into the program) with that.”

Kearney ran a time of 18:05.6 in the Regional in less than ideal conditions.

“It was a pretty muddy course,” she said.

Plus, she was not pushed, winning the race by 37 seconds.

Day ran his season’s best in late September, winning the Jackson Invitational in 15:13.1 – three tenths of a second faster than his MHSAA Finals time in 2015.

Everything was on an upward trajectory until he tripped and bruised a knee during a recruiting visit to Michigan State.

Day thought it was just a scrape. He didn’t feel any pain during a training run the following day, and at a Big North meet two days later. But on the cool down after the race, the bruise started bothering him.

He cut back on his training for a couple weeks – right when he should have been building up – but he said the knee is much improved now, thanks to daily treatments to speed up the recovery.

Bullis is not surprised. In fact, she’s impressed with Day’s attention to detail in staying as fit and healthy as possible.

“He’s very in tune with how he feels and what he puts in his body,” she said.

Day sticks to a healthy diet, one that focuses on what’s beneficial for his blood type. 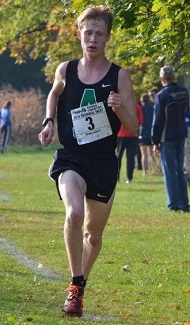 “I’m very blessed that my mom is into all of that,” he said.  “She’s given me a lot of information. We do it together. We have fun with it together. People always think eating healthy is hard, but it’s not, especially when you get used to it. You start enjoying it – spinach, kale, all that stuff.

“I have a list of foods that I follow. In my diet, there’s no chicken, no wheat. Now, sometimes you can have it, but usually we go for stuff that’s beneficial. The day before a big meet I’ll always go for lamb and broccoli. That’s my go-to meal. And some feta cheese – got to have that in there as well.”

With the graduation of Traverse City Central’s Anthony Berry (fifth in Division 1 last year) and Traverse City West’s Nick Hirschenberger (11th), Day did not face the same type of league competition this fall. That, however, enabled him to work with his teammates, much like he did in the Regional.

At the Regional, the Wildcats pulled a switch, trading in their traditional white tops and green shorts for all black attire.

The runners seemed inspired by the change.

“We were seeded fourth,” said Bullis, now in her fourth year as head coach. “I told them we couldn’t be in a better place. I like running there. Then, when we changed uniforms and ran in black, it was even better because nobody knew who we were.”

They probably knew Day.  The one-time soccer player has come on strong since devoting himself full-time to cross country.

“He’s just now becoming an all-around runner,” Bullis said. “He didn’t start running full-time until August of 2015. He’s more race ready now with another year under his belt. Everything in his tool box is in place for this race.”

“It’s been a good season,” he said, “and I’m very excited to see where it’s going (Saturday).”