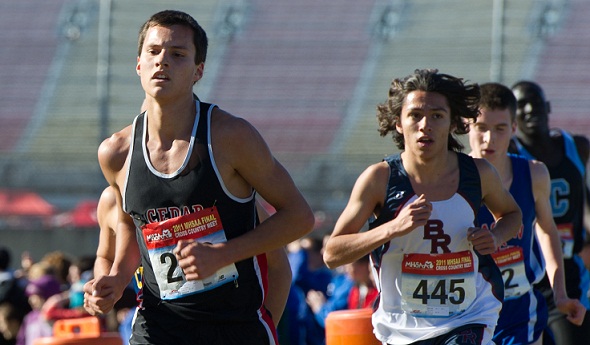 Mr. Competitive got the nickname from his fourth grade teacher, and he still loves to win.

He's enjoyed that feeling more times than most over the last three years. But Connor Mora nearly made a decision that would’ve deprived the state’s cross country community of its fastest runner this season.

Soccer was a serious contender for Mora’s talents as he contemplated what fall sport to play as a freshman. Not until the end of June that summer did the now-senior decide to join Cedar Springs’ cross country team instead.

“I’ve thought about it a lot, where my life would be if I chose to play soccer. I don’t know where I’d be right now,” he said.

And the rest is history. Or can become so today.

A Second Half High 5 recipient this week, Mora will run in his fourth and final MHSAA cross country championship race at Michigan International Speedway, and is expected to lead the pack.

To answer Mora’s question, had he chosen option two, he might have just finished patrolling the Redhawks’ midfield. He was “all right” at soccer and played it through middle school. But that’s when he also decided to run cross country with some friends who were joining the team.

In 2010, Mora cut his Finals time to 15:39. He finished fifth in Division 2 and was the fastest sophomore in any race by five seconds.

Last season he ran a 15:33.2 at MIS, good for third in Division 2 behind two seniors. And he was again second-fastest in his grade on the day, with only Carey in Division 1 edging him by a second.

So it makes sense that Mora enters his final high school cross country race with the fastest time in the state this fall by 11 seconds after breaking the 15-minute milestone with a 14:54 at his Regional a week ago.

That time broke his personal best by 20 seconds and the Cedar Springs school record by seven.

"The exciting thing for me as a coach was being able to call off his time with maybe 200 or 300 meters to go. That’s one of my styles; I’m not at the finish line, I’m away from the finish line letting them know where they’re at,” Cedar Springs coach Ted Sabinas said. “When I called out his time, I could see he instantly knew what that meant. He had put on an amazing 800 anyway to separate himself from Clark Ruiz (of Big Rapids). When he knew he had a chance to break into the 14s, that look on his face, that effort he put in, it was something to see.”

Breaking into the 14s for a high school runner is comparable to a running back rushing for 2,000 yards or a basketball player scoring 2,000 points in a career. It’s done on occasion, but only by the very best.

Sabinas has coached cross country at the school for 28 years. He’s watched the program emerge from its beginnings to an MHSAA team title contender, and he told Mora earlier this week that he remembers vividly when his all-time top runner broke into the 16s for the first time, and then the 15s too.

But he’s become memorable for more. Mora won MHSAA track championships in the 1,600 and 800 this spring, and owns the school 1,600 record of 4:09. He’s a 3.8 student and a leader who pulled in even his youngest teammates and helped them to feel included. Mora remembers the runners who pushed him when he was a freshman, and works to supply the same influence now.

“Certainly his times stick out. But it’s his nature and his personality,” Sabinas said. “He’s a leader on the team with his actions. He leads by the way he presents himself in practice. He doesn’t take an easy day. He leads in the classroom. We’ve got a close-knit group of kids here, and he leads the way.”

That will be the goal today. Mora has finished lower than first only once this season, nearly two months ago.

“My drive to win, that’s really what drives me. I don’t want to sound full of myself or anything, but I just want to be the best,” Mora said. “I want to set an example mostly for others coming up, who are in that position, and I want to give them someone to look up to.”