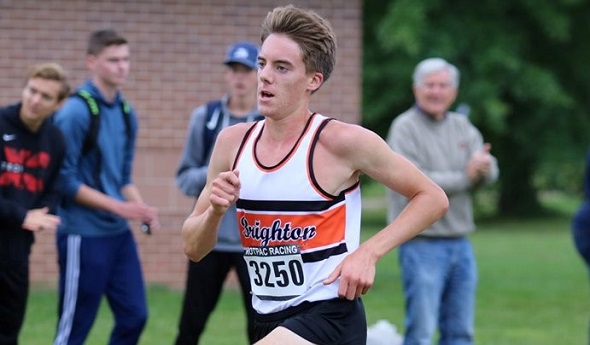 The Bulldogs distance ace posted Michigan’s fastest high school time since 2014 with a 14:48.1 to finish first at the 35th Ann Arbor Father Gabriel Richard Invitational on Oct. 12. He cut 14 seconds from his personal record run from a week before and cleared the field by 22 seconds, earning the MHSAA “Performance of the Week.”

Spamer was a strong competitor last season, finishing 18th at the Lower Peninsula Division 1 Final at Michigan International Speedway after coming in 48th as a sophomore. He’s taken another significant jump this fall, finishing first or second in all but one event – when he took third in the Elite race at the Sept. 13 Spartan Invitational at Michigan State University. Running against many of the state’s best again at the Portage Invitational on Oct. 5, Spamer cut 30 seconds off his previous season-best time with a 15:02. That set the stage for last weekend’s awe-inspiring run, the fastest in the state since former Grand Blanc speedster (and eventual 12-time Stanford All-American) Grant Fisher posted a 14:43 at Portage in 2014.

Talent and hard work have delivered Spamer’s improvement, of course – but credit also should go to his competition in the Kensington Lakes Activities Association, including teammate Zachary Stewart and Plymouth senior Carter Solomon, last season’s LPD1 Final runner-up. Spamer finished second to Solomon at Thursday’s KLAA finals, where five runners cleared 15:24. Brighton won the team championship at the league meet and is ranked No. 1 in LPD1 as it pursues a first MHSAA Finals championship since 1995. Spamer is hoping for a similar jump next spring on the track as he’ll look to improve on a ninth place in the 1,600 and 11th in the 3,200 from this past June’s LPD1 Finals. While he surely has a future in racing, academics will provide plenty of opportunities as well. Spamer carries a 3.95 grade-point average and is interested in studying computer science or computer engineering as he considers his next destination after high school.

Coach Chris Elsey said: “Jack has been a tremendous inspiration to his teammates. He is the perfect model to show what can be accomplished with a lot of hard work and dedication. As a freshman he couldn't crack the varsity lineup, and now he's one of the top runners in the state. Jack is extremely coachable. He responds positively to both praise and critiques, and he is always looking for ways to improve the team. Jack is an excellent teammate. The team's goals are always first, and he is most excited to see the breakthrough performances of his younger teammates. Jack is a great leader. His demeanor and work ethic at practices, meets, and in the classroom show his peers how to do things the right way every day. He has been a pleasure to coach these four years, and I'm looking forward to seeing what the rest of this season has in store.”

Performance Point: “The first mile was really fast, and after that I was just trying to keep that same pace,” Spamer said of his Gabriel Richard race. “I knew I was definitely pushing it a lot more than usual. We didn't have splits at the second or third mile, so I was hoping that I was going at a pace where I was going to break 15. It definitely felt different than previous races. The weather was the best you could ever have for running that morning. The course was fantastic and super flat and great for PR'ing (setting a personal record). ... When you have an opportunity like that to run that fast, it's a really good opportunity to take because generally cross country weather isn't as good as you hope it (will be). Taking advantage of the conditions really helped me to break 15 minutes.” 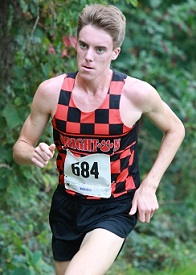 Dropping time: “Mainly it's just training in the offseason and just working toward goals that we had set. I have such a great coach that he was able to dedicate his time not just during the season but in the offseason to continue to train us so we're the best that we can be. So just that and the fact that I've been able to have goals to work for, and setting those has helped me get to where I am now – massive improvements from last season.”

Eye on No. 1: “Going into this season my goal was low 15s. But then after Portage, and that was a really big breakout race for me, I knew I definitely had the capability to go even faster. … From aiming for top five in the state, now my goal is pretty much just state champ. Being able to have confidence going into meets in the championship season knowing that you can compete with some of the best guys that are out there, I changed my mindset and now I just know that if the better guys are racing at one pace,  I know that I can probably race at the same pace. Going into races with that kind of confidence definitely helps a lot.”

Rivals get us ready: “Being able to have so much great competition in the dual meets that you do during the regular season, you just gain so much experience out of that – especially running against kids that you're going to be running against at some of the biggest meets. Being able to race (Solomon and others) now definitely helps so when you're going into the other meets you're like, ‘OK, I've raced them. I know how they race.’ It's just another confidence builder. When you're running a 5K race, it definitely helps to have a lot of confidence. … We're really cool (with each other). As much as it's fun to compete with them on the course, everyone is great people off the course. We all just kind of talk and joke to each other and stuff. We're all great friends.”

This computes: “I've always been interested in computers and stuff like that since I was little. It's something I'd love to learn more about. Probably stuff to do with coding most likely, or if I look at the computer engineering route building circuits and stuff for computers and components. I'm definitely more of a math and science kind of guy than English.”

PHOTOS: (Top) Brighton's Jack Spamer leads the pack at Kensington Metropark on the way to winning the Averill Invitational on Sept. 7. (Middle) Spamer climbs a hill during a meet against Canton and Novi. (Photos courtesy of the Brighton cross country programs.)