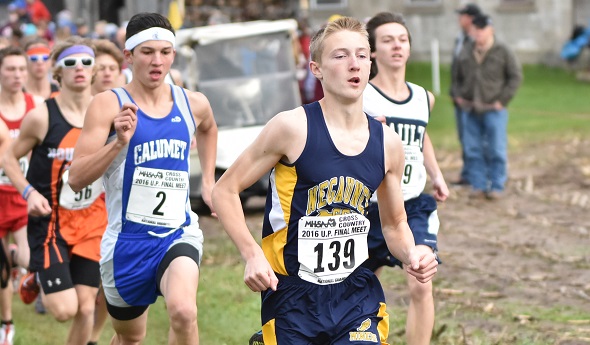 Yesney led the Miners to their second straight MHSAA Upper Peninsula Division 1 championship Saturday, improving from his personal runner-up finish in 2015 to also earn the individual title – in an MHSAA U.P. Finals 5K record time of 15:49.8. Yesney broke the record, set by last season's champion Lance Rambo of Marquette, by 21.2 seconds to earn the Michigan National Guard "Performance of the Week."

His goal for the weekend was to break 16 minutes, and the 15:49 was a personal career record after he ran consistently in the 16-minute range during the rest of his undefeated season. Saturday's time also was 42 seconds faster than what he ran to finish second in 2015. The Miners have won every event where he's run over the last two seasons. Yesney also runs track & field during the spring – he finished second to Rambo in the 1,600 at last season's U.P. Division 1 Finals, while also taking fifth in the 3,200 and running on the third-place 3,200 relay – and was instrumental in the formation of the school's club soccer program.

Yesney's next goals for cross country include running in the annual Foot Locker Midwest meet for the second year in a row, and next fall as a senior he hopes to compete in some downstate events. An honor student, Yesney was part of the Miners' academic all-state team in 2015 that achieved a 3.95 grade-point average. He still has a year to settle on the details, including if he'll seek to run collegiately, but Yesney does know that he'd like a career that allows him to travel.

Coach Lisa Bigalk said: “Colton is a very hard-working, dedicated runner. He is a wonderful leader. He really cares about his team and fellow teammates. Our boys team was led by Colton last year when they had an undefeated season and won the Division 1 U.P. Finals state championship; this team was very determined to defend their Finals championship this year. They did that along with winning the team title of every race that Colton ran in. … Colton is a very focused and determined student-athlete. Colton is an honor student who is very willing to learn and easy to coach. I am very proud of Colton, and I look forward to his future successes.”

Performance Point: “Honestly, I haven’t thought about it recently,” Yesney said of Saturday. “I do remember just feeling good during the race, running as hard as I could and giving it all I can. My teammates, they’re really supportive, and I really wanted to win them a state title, help out with that. I was going to go out and run the race, and if another runner had a good day, then good for him. I can’t really control what everybody else runs, but it just turned out I had a big lead and broke a record.”

It’s about team: “We do everything together; we practice together, warm up together, socialize outside of school together. All of that bonding makes us more of a family. Since I’ve been part of the program it’s been like that because we’ve had really good leaders on the team. I had a good friend who just graduated (Grant Johnson) who we all looked up to, and he held the team together, knew what to do. I kinda followed him. This year I’m a junior, and I wasn’t even nominated for captain or anything, but I guess people look up to me. My coach said I’m a good role model, and I try to bring people together. … (My teammates) make me happy, and I really appreciate being around them. They deserve to have this title, because they help me out, and I wanted to help them out. It’s something I learned over time; when I was younger I was focused more on myself, but I just developed into a person who puts teammates first now.” 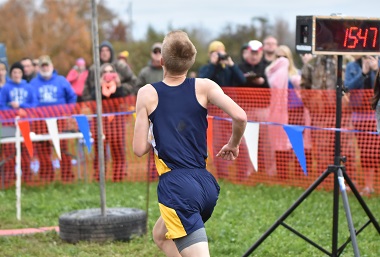 Competitive, with perspective: "It depends on the situation; say I ran and broke 16 and lost. I'd be happy, but there's nothing I can really do about (not winning). My teammates, I think about my family, the people I care about ... I run for them. I don't really get satisfaction from running just for myself. That's just how I am."

See the world: “I’ve been to 24 states and one Canadian province, and when we go on those trips it’s fun to see different people, a different culture and how people live their lives in other places. … I literally want to see everything. I want to see every country, do everything there is to do.”