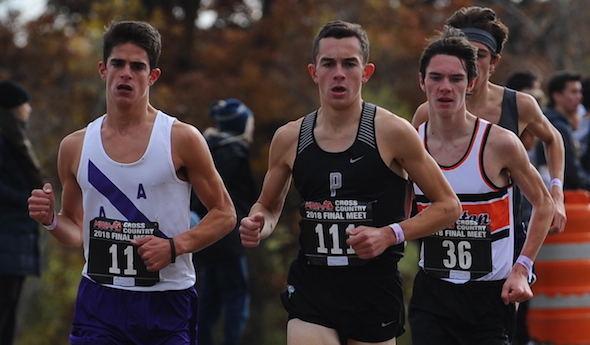 For the Plymouth junior, it’s all about the competition.

He got plenty in the form of Ann Arbor Pioneer senior Nick Foster, but Solomon got the victory he really wanted by leading Plymouth to its first championship at the MHSAA Lower Peninsula Division 1 meet Saturday at Michigan International Speedway.

The Wildcats were runners-up by three points last year, but came through in another close meet to edge surprising Walled Lake Central, 122-127.

Walled Lake Central came into the meet ranked No. 11, but this meet didn’t necessarily go according to form, with the exception of Plymouth. The Wildcats were ranked No. 1, but none of the other teams ranked in the top three finished there when it mattered most.

“I’m so proud of those guys after last year being runner-up,” Plymouth coach Jon Mikosz said. “To have the pressure on them all year and to be able to come back and pull it off is amazing.”

Solomon led the way, finishing second in 15:18.1. He battled Foster, the reigning champion, step for step until the Pioneer senior pulled away with the finish line in sight to win in 15:13.0. 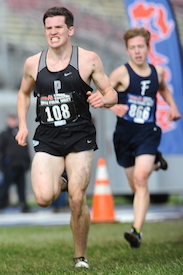 “I love going out to races like this and testing myself. In a few weeks, I’m going to the Foot Locker regional. I know that’s a really stacked race. I’m super excited for that. I knew Nick was going to be there the whole race. He closed a lot harder than I did.”

Foster and Solomon were part of a five-man lead pack at the two-mile mark. Foster said he believed he could prevail if it came down to a kick at the end.

“I was pretty confident,” he said. “I knew a couple of those guys can finish pretty strong. I knew it wouldn’t come easy. With 700 meters to go, I felt good. I knew Carter was on me. I just had to keep going right through the finish. It was tough, but this is my third year doing it, so I knew it was going to be tough. But, like last year, I realized I have more left than I think.”

Walled Lake Central ran with a tight pack, its five scoring runners separated by only 16.2 seconds. The Vikings couldn’t overcome Plymouth’s strength near the front.