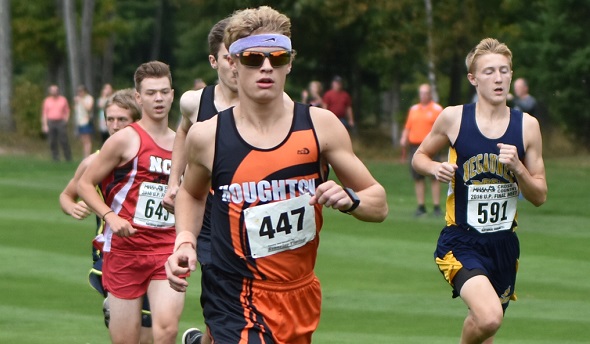 Two reigning individual champions are back from a year ago, as is the runner-up from the race where the winner has moved on. Reigning Division 2 and 3 team champions Ishpeming and Chassell, respectively, are expected to celebrate again for the fourth straight seasons – but so too is Houghton for the first time since 2011.

Races begin Saturday with the Division 3 girls at 11 a.m. and finish with the Division 1 boys at 1:30 p.m. Check back Saturday evening for coverage of all six Upper Peninsula Finals, and see below for more teams and individuals to watch.

Negaunee has won the last two UPD1 championships and finished 16 points ahead of Houghton last season. The Miners have three of their top seven back for this weekend, led by reigning champion Colton Yesney; he won last year’s race by 36 seconds. But Houghton brings back five of its top six including third-place Clayton Sayen and fifth-place Seth Helman, who like Yesney have continued to dominate this fall as seniors. Marquette is in the mix with its top three and four of its top seven back from last season’s third-place team, paced by reigning Finals runner-up and current senior Garrett Rudden.

Individuals: While Yesney, Rudden, Sayen and Helman give the field four of last season’s top-five finishers, none of the rest of the top 10 returns – although Negaunee sophomore Eric Anderson and senior Elliott Prusi were 10th and 11th last year, respectively. Marquette senior Luke Rambo, who won the Great Northern Conference meet title last week, also likely will be among the leaders. Gladstone junior Adam Bruce won the Mid-Peninsula Conference meet championship (although Yesney was unable to finish) and should find the frontrunners as well.

The Hematites have won three straight UPD2 championships and did so last year on the strength of five top-10 finishers, with all seven racers coming in 21st or better. Although reigning champion Grady Kerst graduated, runner-up and now-junior Spencer Giroux, ninth-place sophomore Jonah Broberg, 10th-place junior Devin Tasson and 13th-place senior Kyle Pruett fill the top of this season’s lineup. Wakefield-Marenisco/Bessemer finished 12 points back last year and returns its top six runners who all finished among the top 16 at last year’s Final, led by fourth-place senior Isaiah Aili, fifth-place junior Devon Byers and eighth-place junior Uriah Aili. Ironwood finished a distant fourth last season but also has broken into the picture with an experienced group – junior Nick Niemi was fifth last season as his team brings back its top three and four of the top seven from that race.

Individuals: Total, seven of last season’s individual top 10 will race again this weekend – all seven are mentioned above. Led by Wakefield-Marenisco/Bessemer senior Tim Rowe, six who finished between 11-20 last season also are back including Newberry juniors Chase Canfield and Evan Griffis.

Chassell also has won three straight titles and got past Brimley by 23 points to win last season’s championship. The Panthers bring back two of their top four, led by third-place finisher and now-junior Ben Tuomi. Brimley is fresh off a league title but also returns two of last year’s top four – with senior Austin Plotkin the individual favorite again after winning last year’s Final by 34 seconds. Munising was sixth in Division 2 last season but brings five of the top six runners from that race to this weekend’s finale.

Individuals: Cedarville sophomore Thomas Bohn came in fourth last season and only a second behind Tuomi. Stephenson senior Ethan Brown and Pickford senior Michael Satchell came in sixth and seventh, respectively, and only seven seconds back of Tuomi in third – meaning there could be a pretty tight pack chasing Plotkin, who won by 23 seconds.

PHOTOS: Houghton's Clayton Sayen (447) leads the pack during the Harger Invitational on Sept. 26 at Pictured Rocks Golf Club. Negaunee's Colton Yesney (591) is chasing and ended up winning the race. (Middle) Ishepming's Spencer Giroux came in fourth at the Harger. (Photos by Cara Kamps.)