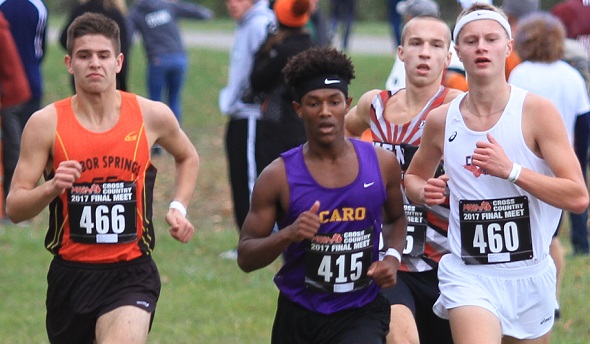 Team and individual history is waiting to be made at Saturday’s Lower Peninsula Boys Cross Country Finals at Michigan International Speedway.

A year ago, the final state rankings predicted all four champions – and if they’re accurate again, Plymouth will celebrate its first title in this sport. Meanwhile, Caro’s Yami Albrecht will try to lead the Tigers to their first title in four decades, while becoming just the 15th boys runner to win a third individual Finals championship.

A total of 977 runners will take to the course at MIS for the boys races, which begin the day with Division 4 at 9:30 a.m. Below are some of the teams to watch and a glance at each of the individual fields. Click for all Finals qualifiers, a map of the course and links to buy tickets and watch the Finish Line camera on MHSAA.tv, and come back to Second Half later Saturday for coverage of all four meets. (NOTE: “Rankings” of individual runners below are based on data at Athletic.net, which orders runners based on the single fastest times they’ve run this season.)

Plymouth’s runner-up finish in 2017 was its highest ever at an MHSAA Finals, and the Wildcats are predicted to take the next step Saturday after finishing second last year by a mere three points. Five of last season’s top six runners return this weekend, led by junior Carter Solomon (fifth in 2017). Plymouth took three of the top four places at its Regional, with Solomon the individual champ in 14:59.4. His 14:59 flat on Oct. 13 is tied for the fastest time in the state this fall. Pioneer brings back three of its top six from last season’s championship team, led by individual champ Nick Foster – his season best of 15:03.1 ranks him third fastest in the state this fall. Clarkston finished eighth last season but with one senior and none in the top five – the other six all return, and senior Brendan Favazza’s 15:16.2 on Oct. 17 ranks him as the eighth-fastest runner statewide.

Chelsea broke through for its first championship in this sport a year ago, and four of the top six from that team return – and all four rank among the top 20 runners in Division 2, led by senior Jensen Holm (11th in 2017). Fremont was runner-up in 2016 and 2014 and won the title in 2015, and finished sixth last season with four freshmen among its top five. They’re sophomores now, and Nathan Walker’s 15:34.3 to win his Regional ranks him sixth in the division. Corunna senior Ben Jacobs is another standout, and his 15:34.7 personal record run Oct. 6 puts him seventh. He finished third overall last season and is among four of Corunna’s top six from the runner-up finish who will try to carry the team to its second championship in three seasons.

Caro missed its first championship in this sport since 1980 by six points last season, but is the favorite this time with all seven runners back from the runner-up finish. The Tigers are led by senior and reigning two-time individual champion Albrecht – his 15:28.7 on Sept. 29 ranks him second among Division 3 runners this fall and 15th regardless of division – and senior Aaron Hurlburt was 20th individually at last year’s Final. Pewamo-Westphalia finished 10th last season after winning the Division 4 title in 2016 and returns four of last season’s top five led by junior Hayden Germain (23rd in 2017, ranking 11th this fall). Hanover-Horton graduated three of its top four from a year ago but returns its other four runners from the championship team.

Two top-10 individual finishers led Saugatuck to a 12th-place team finish in Division 3 in 2017, and total three of the top five from that team return. Senior Corey Gorgas was fourth in Division 3 the last two years and has the top time in Division 4 this season at 15:13.3, while sophomore Nik Pettinga took 10th in Division 3 a year ago. Sacred Heart isn’t going to just give the title back, of course; the team’s top four (and five of the top seven) are back. Breckenridge is running for its first Finals championship since 1976, and after missing the Finals completely last season. Freshman Mason Sumner ranks fourth among Division 4 runners with a 16:02.8 run Sept. 19.