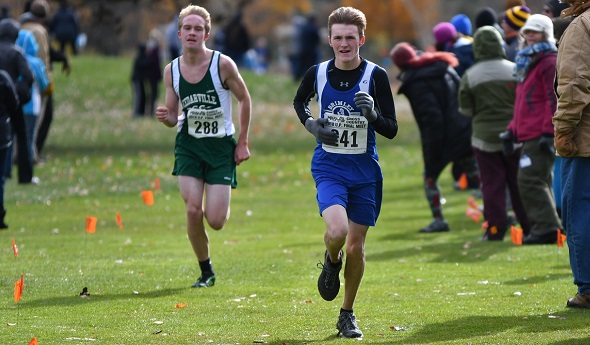 Brimley’s Austin Plotkin is part of that three-timers group. By the end of this weekend, he could join Shay is much smaller company.

Upper Peninsula Cross Country Finals races begin Saturday at Gentz’s Golf Course in Marquette with the Division 1 girls at 11 a.m. and finish with the Division 3 boys at 1:30 p.m. Check back Saturday evening for coverage, and see below for more teams and individuals to watch. (Click for race information and competitors.)

The Division 1 race has seen plenty of variety lately with four schools winning at least one championship over the last five seasons. The rankings would indicate Marquette as the favorite to jump up from fourth last season and win its first Finals title since 2014. Four of the team’s seven runners from last year are back and all four finished among the top 30 overall, led by now-seniors Hogan Nemetz (13th) and Moses Waide (16th). But Sault Ste. Marie will be right there again with four of the top 14 finishers back – senior Kaaleb Ranta (fourth), junior Jaron Wyma (sixth), senior Zachary Wilcox (eighth) and sophomore Riley Eavou (14th). And reigning individual runner-up Joe Wood is back for his final high school race to lead the reigning team runner-up Houghton, which also has juniors Branden Peterson (11th) and Jake Sullivan (20th) back among others.

Individuals: Gladstone graduated champion Adam Bruce and third-place Jake Strasler. But sophomore Giovanni Mathews could lead the way after finishing fifth a year ago. Total, six of last year’s top 10 are back for this weekend, and Menominee junior Hunter Shepeck is another likely contender after coming in 12th in 2018.

Ishpeming is running for its second straight championship and fifth in six seasons – and finished runner-up in 2017 when Wakefield-Marenisco/Bessemer won the title. W-M/B was runner-up for the other three of the last four championships. Last year’s matchup between the two was decided by 15 points, and Ishpeming returns four top-13 finishers: senior Jonah Broberg (fourth), junior Jordan Longtine (fifth), junior Joseph King (12th) and junior Silas Broberg (13th). Ironwood is expected to maneuver into the second spot this time and brings back junior Blaze Hollenbeck (ninth) and senior David Collins (16th).

Individuals: Senior Adam Mazurek leads the way for Wakefield-Marenisco/Bessemer coming off a seventh place last season. Manistique senior Alex Misniakiewicz also is back after coming in sixth. Total five of the top 10 from last year will return, a number made smaller with Newberry running in Division 3 this fall.

Similar to Ishpeming in Division 2, Chassell also is running for its second straight title and fifth in six seasons, and finished runner-up in 2017 when Brimley came in first. Chassell edged the Bays by 13 points last year and brings back sophomore Daba Holmes (eighth) and junior Kolson Kytta (12th) from a group of five top-13 finishers. Brimley should make a run at the title based on its star power at the top – Plotkin again is the reigning individual champion and junior Cameron Hoornstra finished third last season.