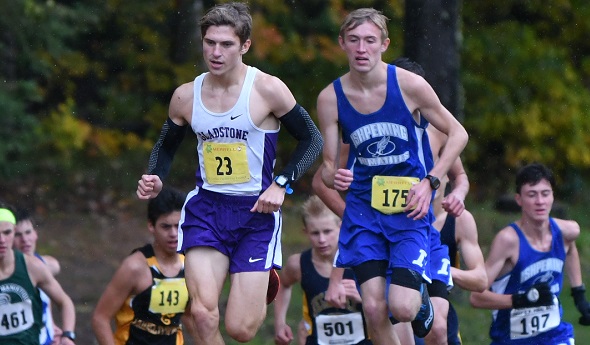 Marquette and Ishpeming have combined for 40 Upper Peninsula boys cross country championships over the years.

They’re predicted to add to that total this weekend.

The Redmen and Hematites are among teams that enter Saturday’s Upper Peninsula Boys Cross Country Finals top-ranked in their respective divisions. Chassell also is a favorite, running for its eight MHSAA championship in this sport.

Races at Pictured Rocks Golf Course in Munising begin Saturday with the Division 1 boys at 11 a.m. and finish with the Division 3 girls at 1:30 p.m. Check back Saturday evening for coverage, and see below for more teams and individuals to watch.

Marquette has won the most U.P. Finals titles, 22, and is favored to win its first since 2014. The Redmen finished 15 points behind Houghton last season as they combined to take six of the top 10 team places – although five of those runners graduated this spring and the sixth isn’t running this weekend. The Redmen did win the Great Northern Conference meet last week with five of the top 10 finishers led by senior Mathurin Gagnon, who took 22nd at last season’s Final. Houghton finished second in the Western Peninsula Athletic Conference and returns senior Clayton Bulleit, who was 18th at last season’s Final, and junior Joe Wood was the individual West-PAC champ. Gladstone, led by individual favorite Adam Bruce, was second at the GNC taking the top two spots and three of the top six.

Individuals: Seven of the top 20 from last season’s Final are back this weekend, and Bruce recently won both the GNC and Mid-Peninsula Conference meet championships. Senior teammate Jake Strasler was eighth last season and should help keep the Braves in the team title hunt. Negaunee junior Eric Anderson also returns after finishing ninth, and Sault Ste. Marie brings back three top-20 finishers from a year ago – junior Kaaleb Ranta, sophomore Hunter Walther and senior Jakob Hopkins.

Last season’s Final was a two-team race with Gogebic and Ishpeming placing nine of the top 10 runners. Ishpeming’s top seven all placed among the top 17, and five of those runners return led by individual champion and now-senior Spencer Giroux, junior Jonah Broberg (fifth) and senior Devin Tasson (10th). Gogebic placed six among the top 14 a year ago, and four return including seniors Uriah Aili (third), Devon Byers (fourth) and Cade Mazzon (sixth). Ironwood is led by senior Nick Niemi, who came in eighth last season, and junior David Collins is returning after finishing 16th.  Aili, Niemi and Giroux finished in that order in the top three spots and all within two seconds of each other at the Houghton Invitational on Oct. 4.

This was another two-team race last season – so much so that it came down to a sixth-runner tiebreaker. Chassell won three straight titles from 2014-16 and is expected to rise to the top spot again returning three of last season’s top 13 – seniors Ben Tuomi (third) and Kurtis Kytta (sixth) and freshman Daba Holmes (13th). Brimley was left out of the final rankings but returns three of the top 11 finishers – reigning individual champion and now-junior Austin Plotkin plus sophomore Cameron Hoonstra (eighth) and senior Hunter Lipponen (11th).

Individuals: Cedarville junior Thomas Bohn was the runner-up a year ago and also is back, meaning the top three from last season’s race all return as 10 of the top 16 are expected to run Saturday. Also look out for Powers North Central senior Griffin Johnson (ninth last year), Rudyard junior Payton Cheney (10th) and Rapid River junior Azariah Hernandez (16th).