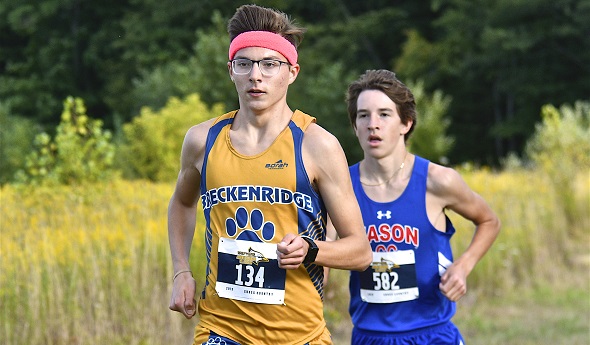 That means there’s plenty of opportunities for the next wave of runners at this weekend’s Lower Peninsula boys cross country championship races, and plenty of candidates ready to take the lead both individually and in what looks on paper to be wide-open team competition in at least two divisions.

A total of 995 runners will take to the course at MIS on Saturday for the four boys races, which begin with Division 4 at 10:50 a.m. Below are some of the teams to watch and a glance at each of the individual fields. Click for all Finals qualifiers, a map of the course and links to buy tickets and watch the live broadcast on MHSAA.tv, and come back to Second Half later Saturday for coverage of all four meets.

Brighton is favored to win its first boys cross country championship since 1995 bringing back its top three finishers from last year’s 10th-place team. Senior Zacahry Stewart was fourth in 2018, senior Jack Spamer was 18th, and Spamer is an individual contender with the state’s second-fastest boys time (14:48.1) this season. Stewart’s 15:07.1 season-best ranks eighth statewide covering all divisions, and senior Scott Spaanstra also returns from last season and could make a run at the individual top 20. Dexter is led by senior Owen Huard, whose 15:04 season best ranks seventh statewide after he finished 16th at last year’s Final. He’s one of four Dexter runners back from the team that finished third last season, and senior Nathan Larson was another top individual coming in 22nd. Stoney Creek finished 16th as a team last year with only one senior in the lineup, its fifth finisher. The other six all are back, with senior Sam Tarling last year’s top individual placer at 52nd.

Individuals: Plymouth senior Carter Solomon has three top-18 finishes at past Finals and came in second, five seconds off the lead, a year ago. He’s undefeated this fall and at his Regional ran the state’s fastest time of the season, 14:42.7. Total, four of last season’s top eight Finals finishers are back. Stewart, Clarkston senior Brendan Favazza (fifth) and Fraser senior Joey Tavalieri (eighth) join Solomon, and nine more of the top 20 placers in 2018 also are back in the field. Hartland sophomore Riley Hough has been another of the top runners in Division 1 this fall after placing 27th a year ago.

Chelsea has won the last two Division 2 championships and is ranked No. 4 this week, having graduated its top two from last year’s team but returning its other five runners including senior Will Scott (14th individually in 2018). Last season’s team runner-up Fremont posted nearly a perfect score at its Regional last weekend and returns its top six runners from last year’s Final, led by juniors Nathan Walker (fifth) and Ben Paige (25th); Walker’s 14:52.8 at the Regional is the state’s third-fastest boys time this season regardless of division. Otsego graduated last year’s individual champion from the team that finished fifth, but returns five runners led by senior Hunter Zartman (21st in 2018). Haslett placed now-seniors Joseph Ecklund and Danny Ezzo 38th and 40th last season, respectively, in finishing eighth as a team, and total its top six runners are back this weekend.

Individuals: With four of the top six, six of the top 10, and 9 of the top 19 back from the 2018 Final, this also should be a fast race to the finish. East Grand Rapids senior Evan Bishop was the runner-up a year ago and he’s won every race this fall but one, finishing second to a runner from Ohio at the Spartan Invitational Elite Race at Michigan State. Bishop’s personal record (PR) of 14:56.4 from last weekend’s Regional was the fourth-fastest time in the state this fall. Dearborn Divine Child senior twins Anthony and Michael Hancock have the fifth and sixth-fastest times in the state this fall at 14:59.1 and 14:59.4, respectively, and they came in fourth and sixth at last year’s Final. Linden senior Tyler Buchanan (ninth) and Zeeland West senior Ethan Senti (10th) also are back from the top 10.

Hanover-Horton was the team champion in 2017 and finished fourth a year ago. Four runners from the 2018 team will be back this weekend, with senior Garrett Melling (49th) the top returning finisher. Charlevoix brings back its top two and six of its seven runners from the team that finished 10th a year ago, with Blaise Snabes (64th) the top individual placer from that bunch. Hart was sixth last year and brings back four runners including junior Alex Enns, who came in 11th individually. He and his teammates are bolstered by a trio of freshmen who all finished among the top 19 as Hart edged No. 7 Benzie Central for last week’s Regional title. Saugatuck, last season’s Division 4 champion, is running in Division 3 this weekend and ranked No. 6.

Individuals: Benzie freshman Hunter Jones has been the talk of northern Michigan as one of the state and nation’s fastest in his grade, and his PR of 15:24.8 is nearly 22 seconds better than anyone else’s best in Division 3 this season. Saugatuck junior Nik Pettinga also joins the pack after finishing third in Division 4 last fall. There’s room for new contenders as the top six placers at last season’s Final all were seniors. Pewamo-Westphalia senior Hayden Germain (seventh) is the highest returning finisher, and he was edged by senior teammate Ashton Walker (14th) at last week’s Regional. Jonesville senior Carson Laney (eighth) and Morley Stanwood senior Aiden McLaughlin (ninth) also are back from the 2018 top 10, and New Lothrop junior Carson Hersch could make a big jump. He came in 44th at last year’s Final but has the second-fastest time in Division 3 this fall at 15:46.4.

With Saugatuck in Division 3, there will be a new champion – and Breckenridge is seeking its first title since 1976. The Huskies were fourth last season without a senior in the lineup. All seven runners are back, with sophomore Mason Sumner coming off a sixth-place individual finish and posting the fastest time (15:43.4) in Division 4 this season. East Jordan was third last year with just one senior, and five of the top seven are back including seniors Ethan Nachazel (18th) and Ben Hardy (19th). USA was fifth last season with only one senior, and junior Bentley Alderson (12th) leads six returnees back at MIS.

Individuals: Although Carson City-Crystal junior Coleman Clark is the top returning placer after coming in fifth a year ago, half the top 10 and 11 of the top 20 will race again this weekend. Walkerville senior Shane Achterhof (seventh), Johannesburg-Lewiston junior Carlos Gascho (eighth) and White Cloud senior Reginald Richmond (10th) all are back from the first group. Webberville sophomore Nathan Lott ran the fourth-fastest time (16:20) in Division 4 this fall in winning his Regional after coming in 27th at last year’s Final.