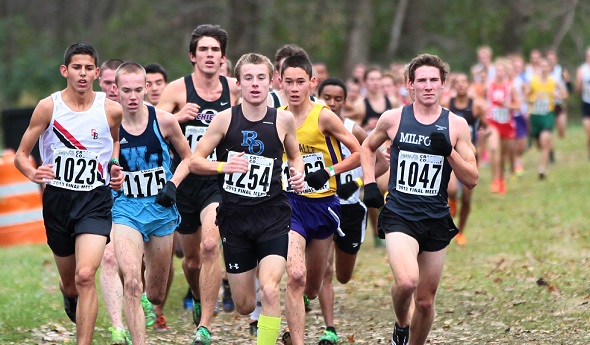 BROOKLYN — It's been a year of "what-ifs" for Grand Blanc junior Grant Fisher.

What if the Bobcats' soccer team hadn't made the MHSAA Division 1 Final last season?

What if Fisher, a starting midfielder as a sophomore, hadn't chosen to play in the championship game instead of running in the MHSAA Cross Country Finals, which took place on the same day?

How would he have done against the best runners in the state?

"The soccer final didn't turn out the way we wanted," Fisher said. "We lost 1-0 to East Kentwood. There's always the thought that maybe I could've come here that day and not gone to the soccer game and maybe contended for state. I don't regret that decision, but it's definitely good to be back."

There will be no questions swirling in Fisher's head for the next year. He ran to the MHSAA Lower Peninsula Division 1 championship Saturday with a time of 15:13.7, beating Kensington Lakes Activities Association West rival and defending champion Brian Kettle of Milford by 18 seconds.

The soccer issue was settled when an unbeaten Grand Blanc team was upset 1-0 in the District Final by Clarkston on Oct. 19. Fisher had already determined that he would run in the cross country finals if the Bobcats reached the soccer final.

"We definitely had a good chance to make it in soccer," Fisher said. "We were ranked fourth going in. It was really too bad of a way to go out. It's allowed me to train for cross more and focus. It's definitely helped my cross country. I haven't won a state title in cross. That's something I really wanted to do."

Fisher already had an MHSAA championship on his resume, winning the 3,200-meter run in track and field last spring after taking second in the 1,600 by the narrowest of margins. In his only cross country final before Saturday, Fisher was 44th as a freshman in 16:14.3.

He had raced Kettle one other time this season, winning by 14.6 seconds in the KLAA Lakes Conference meet on Oct. 17. As was the case in that meet, Fisher and Kettle ran together through two miles before Fisher pulled away.

"I didn't want to leave it for too late, so I made my move at two miles," Fisher said. "Brian was with me for a good amount of time. He was right on my shoulder."

Fisher became the third Bobcat to win an MHSAA championship. Mark Mesler was the Class A team champion in 1977 and Chris Catton was the 2002 Division 1 winner.

Kettle didn't come away empty-handed, as he led Milford to a third straight team championship by placing in the top two for the third year in a row.

Milford edged KLAA Lakes rival Waterford Mott, 165-170, for the title. Mott had beaten Milford in both of the teams' meetings this year, winning 88-114 at the Oakland County Championships on Oct. 5 and 63-72 in the KLAA Lakes Conference meet on Oct. 17.

Milford put it together at the right time to win a fifth championship in the last 11 years.

The difference for the Mavericks was at the No. 4 spot, where senior Kevin Black had a 24-point advantage on Mott's No. 4 runner. Three positions were relatively even between the teams, while Mott had an 18-point advantage at No. 2.

Traverse City Central also was in the title hunt, taking third with 180 points. The Trojans had three runners in the top 11 in the team race, but their No. 5 runner was 118th.