BROOKLYN – What Dearborn’s Riad Rababeh accomplished with a minimal amount of work was pretty remarkable.

It got him wondering what he could do if he trained with a purpose for his senior season of cross country.

The result of his effort was the MHSAA Division 1 individual championship Saturday at Michigan International Speedway.

Rababeh had the fastest time of the day in all four divisions, posting a 15:24.8 on a course that had some muddy sections to win by a 16-second margin over Alpena senior Mitchell Day.

“My junior year, I didn’t do anything,” he said. “Then I went into cross country season and ran 15:30 at states and puked my brains out. This year, I peaked around 65 miles in the summer and I was doing a lot of workouts and a lot of good stuff. I legitimately trained this summer, and it paid off in the end.”

This year’s race was expected to be a battle between Day and Rockford junior Cole Johnson, who were second and third, respectively, last season. With newfound fitness, Rababeh joined the two of them at the front, then began to pull away at 2.5 miles.

He became the first Dearborn runner since 1930 to win the MHSAA individual boys cross country title, something he never imagined when he was far back in the pack two years ago. 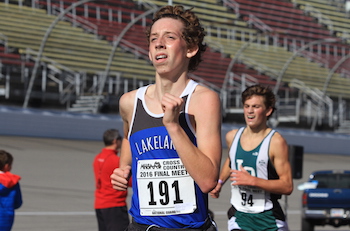 “Maybe top 50, I was hoping, but my junior year just accelerated into something beyond what I ever thought it would be,” Rababeh said. “Now I’m here.”

In the team competition, White Lake Lakeland won its first MHSAA championship since taking back-to-back Class A crowns in 1996 and 1997. Lakeland, ranked fourth in the state, scored 125 points to easily beat runner-up Saline, which had 198.

Birmingham Brother Rice was third with 220, while top-ranked Novi was fourth with 225.

Lakeland put four runners in the top 26 in the team race. Sophomore Harrison Grzymkowski led the Eagles, finishing third overall and second among team runners in 15:51.4.

None of the other team contenders had more than two runners in the top 39 in the team scoring.

PHOTOS: (Top) Dearborn’s Riad Rababeh (206) stays a pace ahead of contenders Cole Johnson of Rockford and Mitchell Day of Alpena. (Middle) White Lake Lakeland’s Harrison Grzymkowski pushes through to finish third and lead his team to a championship. (Click to see more from RunMichigan.com.)