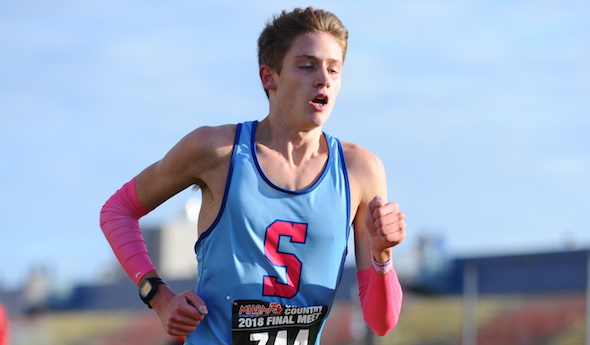 BROOKLYN — Saugatuck senior Corey Gorgas raised his arms as he hit the finish line, but the day wasn’t all about him.

Moments after he completed a solo victory lap to the finish to win the MHSAA Lower Peninsula Division 4 individual cross country championship, he turned around and began looking for teammates.

He didn’t have to search for long.

One Saugatuck runner after another came streaming across the line, matching Gorgas’ individual dominance by placing five scoring runners within the top 30. The Indians scored 62 points to win their fourth MHSAA championship in six years by 40 over 2017 champion Mount Pleasant Sacred Heart on Saturday at Michigan International Speedway.

“Our (Nos.) 4 and 5 pulled through and had the race of their lives,” Gorgas said. “This is crazy. We won our sophomore year in D3, stayed in D3 last year and got killed. That was one of the hardest things I ever had to go through was the 12th-place finish. Coming back this year with young guys like Adam (Martinson) and new kids Tristan (Ashley) and Winston (Marcy), for them to pull through and get us a state championship like that means so much. I’m just so happy right now we pulled this off.” 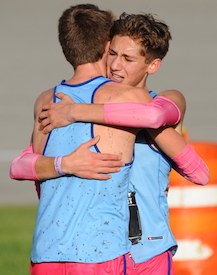 “We were going against the defending champ,” Gorgas said. “They have a great team, great coach, great program. We knew they were going to be tough to beat. We put in a lot of work this summer. I’m glad the guys were able to pull it off with me.”

Gorgas ran the fifth-fastest winning time in Division 4 in the 20 years of the divisional format for cross country.

He won seven of eight meets this year, finishing second by 4.1 seconds to 2017 Division 1 champion Nick Foster of Ann Arbor Pioneer in the Spartan Elite race at the Spartan Invitational on Sept. 14. That race featured many of the top teams in Divisions 1 and 2.

It was the fourth all-state performance for Gorgas, who was 11th in Division 4 as a freshman, then fourth in the last two Division 3 races. He’s the first Saugatuck boy to win an MHSAA individual title.

“It was definitely different, especially last year, being in Division 3, I had so many guys (around me),” Gorgas said. “I was fourth last year. That was a rough race. Coming back down this year, being able to focus and train through a lot of this stuff so I could focus on postseason meets was huge for me.”

Gorgas hit the mile mark in 5:00.12, holding a five-second lead over Luke Pohl of Plymouth Christian. Gorgas stayed strong with a 5:02.05 second mile to expand his lead to 21 seconds.

“Luke Pohl got out pretty hard, so I kind of caught him around the 800-meter mark,” Gorgas said. “I went around him there to throw in a big surge so I could pull away from him. From the mile in, I was all alone.”