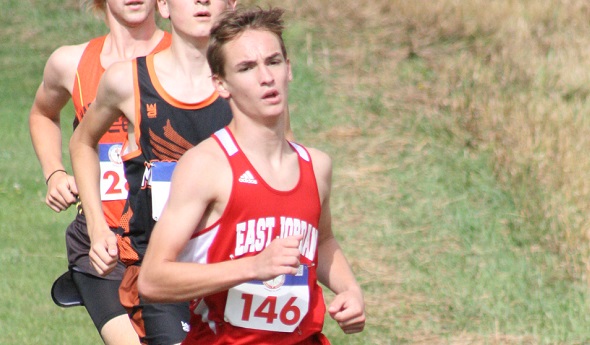 EAST JORDAN — Matt Peterson says he couldn’t have asked for a better group than the one he has this year making up his boys cross country team at East Jordan.

Peterson also couldn’t have asked for more experience than the Red Devils bring into the 2019 season.

East Jordan returns its top five runners from a team that finished third at the Lower Peninsula Division 4 Finals last year, all part of a senior class that has made a major impact for the Red Devils over the past three years.

“Not only are they hard workers and pretty talented runners,” said Peterson, “they’re all just real high-quality kids. They truly lift up everyone around them, not just on our team but in the school. They’re just positive, positive kids, every one of them. I feel super lucky to have them.”

Ethan Nachazel, Aaron Nachazel, Ben Hardy, Alex Schlueter and Caleb Carson are the quintet the Red Devils have leaned on primarily since they entered high school. They led East Jordan to a pair of top-10 finishes in 2017 and 2018 after snapping a 16-year Finals drought for a program that won titles in 1998 and 2000.

The seniors are the best of friends, spending countless hours together at sleepovers or for training runs. Their relationships have forged a bond of cohesiveness between the veteran leaders of the team and the squad in general.

“We’ve all grown up together since kindergarten, and we know each other pretty well,” said Ethan Nachazel. “We keep each other accountable. It’s just nice to know you have all these guys keeping each other together. It’s very important because not only do you work better together and improve quicker, but you also bond way quicker together than you would just by being at practice.”

By all accounts Ethan Nachazel is the Red Devils’ top runner, finishing a team-best 14th overall at last year’s Final and 28th overall to pace East Jordan in 2017. But after that, the pecking order can change from meet to meet and year to year. Hardy, for example, was East Jordan’s fourth counter at the 2017 Final, but improved his time by 1 minute, 14 seconds at last season’s meet to take 15th overall, finishing alongside Ethan Nachazel.

“Ethan has been predominately our first guy, except for one or two meets last year,” said Peterson. “I expect the top five or six to probably move around a bit.”

The Red Devils’ seniors, a collection that has a team-first mindset, have no qualms about who finishes in what order. They’ve set a standard amongst themselves to work toward the ultimate goal — team success.

“It’s fun,” said Nachazel. “We all take the lead during workouts, and we all try to share as much as we can. I think we all contribute just as much. We share the wealth equally.”

“I don’t think it would matter if someone ran well and they were normally the second guy and became the fourth guy because someone knocked them out of their place, but it helped the team,” said Peterson. “They would be OK with that.”

From serious to silly, the Red Devils’ seniors have diverse personalities, but that seems to work toward their advantage in creating good team chemistry, too.

East Jordan’s coach describes Ethan Nachazel as the most serious, while Schlueter brings a humorous side to the equation.

“I think it’s very important to be light-hearted outside of practice and in practice too,” said Schlueter. “Just kind of get everyone’s spirits up. If we were too focused for too long we would just run out of that mental energy at the end of the season, and we don’t want that so I just keep everything light. But when it comes to race day, when we get on that line, it’s just focus.”

The Red Devils have depth outside of their seniors as well. Peterson sees junior Phillip Nemecek and sophomore Caleb Ziebarth as having the capabilities to contribute and perhaps even crack the top five on the team.

Ultimately, the Red Devils are hoping it all leads to another trip to the Finals. There’s no doubting East Jordan is armed with the experience and the ability.

“I think the key for this team, but I could say for any cross country team, is us having a small 1-to-5 gap,” said Peterson. “If we’re fortunate enough to get to the state meet again, I think the team that can pack it up the most and have the smallest gap is going to have the potential to be really successful.”

No matter what happens, though, the Red Devils know the friendships and connections they’ve formed over the years are, and will remain, strong.

“Cross country is one of the best things I’ve ever done,” said Schlueter. “I’ve just met so many people that I love. I’ve fallen in love with these guys. I couldn’t ask for anyone better.”