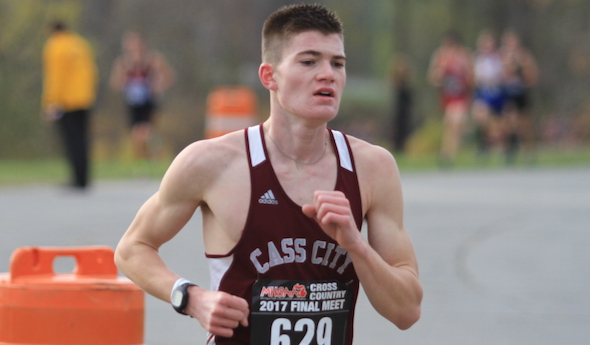 BROOKLYN — CarLee Stimpfel of Cass City had to spend some extra time walking around in the chute area before he could collect his breath and talk with reporters Saturday at Michigan International Speedway.

There was a physical and mental toll in repeating as MHSAA Lower Peninsula Division 4 individual boys cross country champion.

“It was definitely a lot tougher race than last year,” Stimpfel said. “I don’t know what it was. I think it was more mental this year.”

Stimpfel’s margin of victory was smaller this year. He emerged from a five-man pack to win in 16:07.1, beating Plymouth Christian Academy junior Luke Pohl by 6.1 seconds. Stimpfel’s time of 16:02.7 last year was 9.8 seconds faster than runner-up Jeremy Kloss, a Harbor Springs runner who took second in Division 3 on Saturday.

“Everybody’s always on your, ‘Are you gonna repeat this year? Are you gonna repeat this year?’” Stimpfel said. “’You’re not gonna let anybody beat you.’ It’s a lot of pressure. I put a lot of pressure on myself. I want to repeat. I just finally got out there today and was able to pull it off. The time wasn’t the greatest. The quads kind of locked up on me from the get-go. I don’t know if it was a lack of stretching or mentally I let it get to me. I’m happy I was able to pull it off.” 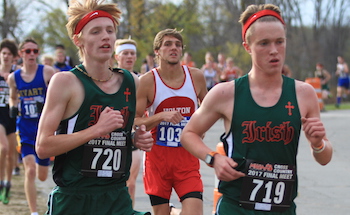 Stimpfel knew one of the top competitors, Ubly senior Alex Grifka, as well as someone can know one of his or her rivals. They are from neighboring communities, racing against each other all year and sometimes training together.

The wild card was Pohl, who was running in his first MHSAA Final after being homeschooled his first two years of high school.

“I haven’t been eligible to run at states,” Pohl said. “This is my first time. It was cool coming back into the stadium and running alongside the track; it’s crazy.”

Mount Pleasant Sacred Heart won the team championship by a 126-185 margin over Potterville, giving the school a sweep of the Division 4 titles. The Irish girls won their third in a row earlier.

The Irish boys won without a star up front, getting their five scoring runners in the top 33 in the team race with a separation of only 40.3 seconds.

It was the first MHSAA Finals championship for the Irish since they won the 1977 Class D title. They were ninth in 2015 and 10th in 2016 on their way to the top.