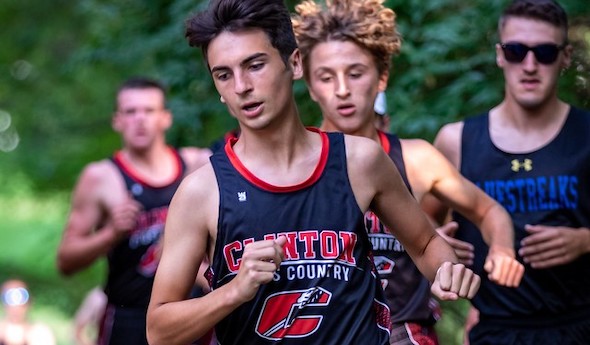 CLINTON – Nathan Chavez took a job at a farm because he wanted to learn more about biology and chemistry. He developed a green thumb.

He joined the Clinton soccer team and helped it to the program’s first District title.

And Chavez was on the cross country team that this fall finished 10th at the MHSAA Finals.

Whatever Chavez touches, he seems to turn to gold.

“I don’t think I have a competitive nature,” Chavez said. “I just enjoy it.”

As calm and collected as Chavez is, he seems to excel at everything he does. In the classroom he takes mainly AP classes and had an adjusted GPA of 4.3 as the first semester of his senior year concluded

He takes everything in stride. But don’t let that fool you, says his father, Clinton varsity boys basketball coach Jeremy Chavez.

“He’s got a lot going on and works really hard,” Jeremy Chavez said. “I’m very proud of him.”

Chavez lives in Tecumseh but started attending Clinton in the second grade. He started running cross country in high school and has been a steady performer for the team, which has been on the cusp of a big Finals finish the last couple of seasons.

“Our team has been developing for four years,” he said. “It was great to see it all come together.”

Chavez never could decide which sport he liked better – cross country or soccer. Instead of choosing between the two, he decided to be a dual-sport athlete in the fall. The soccer team lost several seniors from a year ago, and Chavez was unsure what to expect. Clinton, however, won 10 matches and turned some heads with that first District championship. 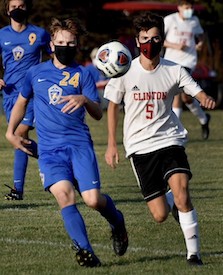 The District Final was tied 2-2 at the end of regulation and two overtimes, but Clinton won it in a dramatic shootout, sending the team to the Regional for the first time.

“It definitely went better than I expected from last year,” Chavez said. “We did really well this year, all season. We lost a ton of seniors, so I really didn’t know how it was going to go.”

Chavez is grateful his parents – Jeremy and Leslie – allowed him to compete in both sports.

“I have a great support system at home,” he said. “They are very supportive of me in whatever I do.”

Dual-sport athletes typically have to choose which will have priority in the event of a conflict. Chavez said that was never an issue.

“When it came to the more important events, it seems like I could always do both,” he said. “Every year that I did it, it went smoothly.”

He’s glad he didn’t have to choose between the two.

“I started out by running cross country, but over the years I ended up playing soccer. I don’t really have a favorite,” he said. “I just like both sports equally. I feel like I was able to show my talents at both.”

Besides helping those two fall teams bring home hardware, Chavez was celebrated a bit on his own by earning academic all-state honors in both sports, which is no small fete. Not only was he practicing or participating in two sports every night and just about every Saturday, he also had to maintain his high GPA.

“During the season it always seems more hectic,” he said. “I always try to get as much homework done in my free time at school. I always studied on the bus, and there were a few all-nighters too. … My teachers are all very understanding, especially during the season that I dual-sport. They understand.

“When I’m in the moment, I don’t notice how much I really put into it.”

While he won’t be playing a winter sport, Chavez is already gearing up for track season, which is just around the corner. He’ll try to help earn more hardware for a school district that has seen a ton of sports success in recent years.

Chavez was recently accepted into the University of Michigan, something that has been a goal of his for some time. He’s pretty sure he wants to go into chemistry or biology, which is one of the reasons he began working at a Britton farm a few years ago.

“I just enjoy everything,” he said.

PHOTOS: (Top) Clinton’s Nathan Chavez charges through a stretch in a cross country race. (Middle) Chavez (5) runs down the ball during a soccer match this fall. (Photos courtesy of the Chavez family.