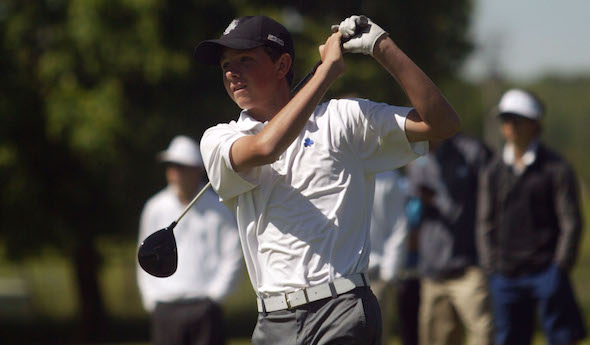 DCC earned its first MHSAA golf title since 2010 with a two-day total of 591 at Katke Golf Course in Big Rapids. That score was 31 strokes better than second-place Battle Creek Lakeview, which finished with 622 strokes.

The championship ended four years of frustration for the Shamrocks that included falling one stroke short at last year’s Final and a third-place finish in 2013.

“It’s been a long time coming to be honest,” Coffman said. “Last year we battled to the end and lost by one. This feels great.”

Not only did the Cougars have to fend off a talented field of teams, but they also needed to fight off tough weather conditions that included plenty of wind along with the always challenging course that is home to Ferris State University.

“The boys just battled all weekend,” Detroit Catholic Central coach Mike Anderson said. “The conditions were tough with the wind, but the boys just kept grinding.”

The Shamrocks relied on a total-team effort and balance to get the job accomplished. Three of Catholic Central’s golfers placed in the top 10 individually, while the fourth score finished just two shots out of the top 10. 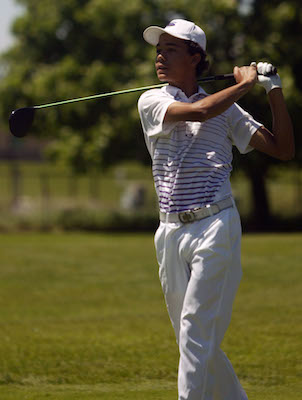 Ben Smith led the way. He turned in a pair of consistent efforts as he shot a 72 on Friday and then came back with a 73 on Saturday to finish with a 145 that placed him third overall.

Max Palmer and sophomore James Piot tied for eighth place. Palmer and Piot both carded scores of 150 for the two days, with Palmer shooting a 70 and an 80 and Piot carding a pair of 75s. Coffman finished the tournament with a 152 total as he shot 77 and 75.

“As a team we played pretty well,” Piot said. “Max played great the first day. Ben played solid the whole weekend, and Will was pretty solid too.”

As a team, the Shamrocks posted strong scores on both days of the tournament. Catholic Central led the by nine strokes after shooting a 294 on Friday. The Shamrocks then came back with a 297 on Saturday.

DCC had its entire team of more than 20 golfers on hand for the event.

“I didn’t expect all of them to make it up,” Anderson said. “It’s a two-and-a-half hour drive, and we had over 20 here. It shows the kind of support we have. This is a pretty special group of kids. They are all good players. We have 60 to 65 kids try out, and we try to whittle it down to 20 or so. They are all good golfers. They are all tournament players in the summer.”

Battle Creek Lakeview placed second overall and also had the individual champion. Junior Andrew Walker, who placed ninth as an individual last year, took home the medalist honor. He shot a 70 on the first day and came back on Saturday to shoot a 72, giving him a two-day total of 142 that was two strokes lower than Donnie Trosper of Canton.

“This is what I’ve been chasing for three years now,” Walker said. “To finally be able to win it is amazing. I tied for ninth last year and finished two shots out of a playoff.”

The experience helped Walker this year.

“Consistency was the key this year,” Walker said. “The course is tough, so I just tried to go out there and stay consistent and not get in too much trouble. This feels amazing. I can’t describe the feeling.”

Trosper, who opened with a round of 67 on Friday, finished with a 144. Catholic Central’s Smith placed third with a 145, as did Joe Montpas of Flushing. Joel Pietila of Rockford placed fifth with a 147.