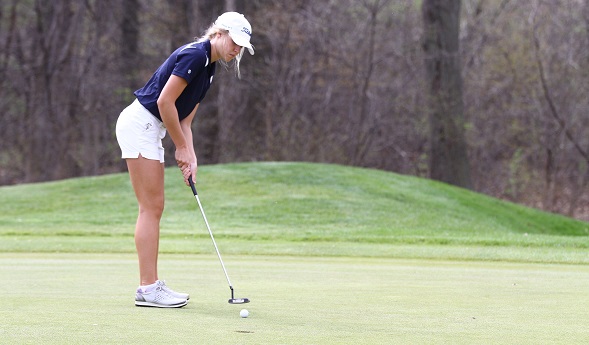 ALLEN PARK – The summer of 2015 was a season of change for Katie Logan.

A senior-to-be at Allen Park Cabrini, she had played the game of golf since she was 3 years old and had been a solid player throughout high school. She’s played on the varsity golf team all four years – but she competes on the boys team.

Logan said she’d never come close to qualifying for the MHSAA Finals in the past and was unaware that she soon could be making history, thanks in part to strides made in her game the last two years and especially last summer that helped her get on par with the best of her spring competition.

Other girls have competed on boys golf teams, but it’s not common. And, until now, it is believed Logan might become the first girl to compete at the MHSAA Boys Golf Finals as an individual qualifier.

“My freshman year was hard,” she said of competing during boys season. “I wasn’t used to it. It was intimidating. Last year I started to hit it as far, or farther, than the guys.”

Michigan High School Athletic Association rules allow a female athlete to compete with the boys, as long as she does not also play on her school's girls team in the same sport during the same school year. Cabrini does not sponsor a girls golf team due to a lack of participation.

Logan, 17, shot a 7-over par 79 in the Regionals at Atlas Valley Country Club in Grand Blanc last weekend to qualify, as an individual, for the Lower Peninsula Division 3 Final to be held Friday and Saturday at Forest Akers East Golf Course in East Lansing.

The fact that she was able to match her teammates with her drives did much for her confidence.

And then last summer, Logan began working with Brian Cairns, one of the state’s top teaching professionals, out of Fox Hills Golf and Banquet Center in Plymouth. Under Cairns’ tutelage, Logan’s game took off. Last summer she shot a career-low 74 at the Lakes of Taylor, her home course.

“He helped me to be more confident. Before, I would kind of like be a downer.”

Young players have a difficult time accepting that everyone hits bad shots from time to time. Perfection doesn’t exist in this game. Golf teaches patience, and if a player has difficulty forgetting a bad shot and moving on to the next it can wear on her or him. Winning is most often not a measurement used to define success in golf. Good players often strive for consistency.

Kevin Logan was the one who introduced his daughter to the game and taught her the basics. When he realized he had gone as far as he could, Cairns stepped in. 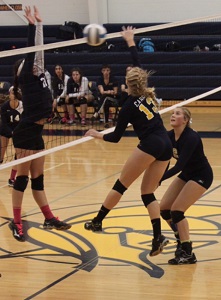 “Right now, when she competes against the boys, it’s her consistency that carries her,” Kevin Logan said. “She darn near hits every fairway with her drives. When she plays against the girls, it’s her length that sets her apart.”

Katie Logan is a good athlete. She was captain of her volleyball team, and she said the average length of her drives is 260 yards.

And just because Logan is a girl doesn’t mean she catches a break playing with the boys. She hits from their tees and keeps pace. In some respects, playing from the men’s tees is an advantage.

According to Logan, a top-10 finish is not out of the question. She’ll have to be on her game for that to take place. Last year’s Division 3 medalist shot 144 for 36 holes, but that was at Forest Akers West, a more challenging track than the East. The Division 2 final was held at East last year, and the medalist shot 134. The two players who finished in 10th each shot 146. Logan needs to break 150 to have a chance at the top 10.

Regardless, she has already broken barriers and taken positive steps toward her future in the game. Her handicap was two in 2015, and last fall she signed to continue at Central Michigan University.

“I’m very excited,” she said of playing in the Finals. “It was one of my big goals.”

PHOTOS: (Top) Allen Park Cabrini’s Katie Logan putts to finish off a hole this season. (Middle) Logan tries to send a spike through an opposing block during volleyball season in the fall. (Photos courtesy of the Allen Park Cabrini athletic department.)