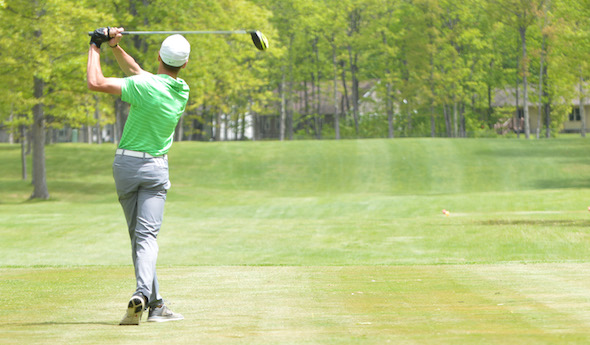 By Amanda Chaperon
Special for Second Half

GLADSTONE – On Wednesday, Carney-Nadeau’s Hunter Eichhorn took the afternoon off school to play a practice round at Irish Oaks in Gladstone, where the MHSAA Upper Peninsula Division 3 Finals would be played the next day.

Last year, when Eichhorn won medalist for the second year in a row, he shot a 68 at that same course.

And Wednesday was no different. His practice round yielded a 69, so it's safe to say he was feeling pretty good heading into Thursday's round.

Unfortunately, his putting was nowhere close to what he would have liked. But that didn't stop Eichhorn from taking medalist honors for the third year in a row with an 18-hole score of 75.

“He's a tremendous kid,” Wolves coach Jake Polfus said. “He has a tremendous work ethic. He puts all the time in to be this good. You don't see that in many kids in any sport around here. He deserves everything he gets. He had a rough day today, but for him that's not that bad. That's where he's grown the most, is how he manages his golf game.”

Throughout the course of the season, Eichhorn has competed against himself. At most events, he was far-and-away the best golfer on the links. On Thursday, however, he had some competition from Cedarville's Avery Freel, who fell to Eichhorn by just two strokes carding a 77.

“I felt good about Avery's game today,” Cedarville coach Rob Freel said. “And I know he had the potential to give Hunter a run for his money. After 15 holes, they were all square. I knew it was probably going to come right down to the wire. Avery kind of had a bad tee shot on 16 and he ended up with a double bogey there, so that was a momentum-stopper for him.

“They're competitive players, and they both came right down to the wire,” coach Freel added. “Avery just fell a little short.”

Avery Freel's overall strategy was a pretty good one considering he was neck-and-neck with the two-time champ with three holes to play.

“I was just trying to match him shot for shot pretty much,” Avery said. “Overall, I thought I played pretty good. I shot even on the front (nine) and then I was just trying to stay with him, and on 16 I had that double (bogey) and that's when it fell apart.” 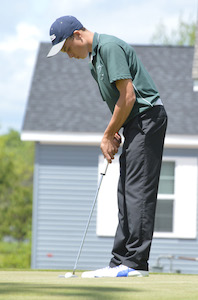 Despite the fact Freel was going up against “the champ” and one of the best prep golfers in the entire U.P. in any division, he didn't feel he had to change his game.

“It's not hard,” Freel said with a laugh. “You just play your own game.”

Which is exactly what his opponent, Eichhorn, did to earn himself the honor of top player at the tournament, and also help his team to its second straight U.P. Finals title.

Well, that, and knock in a few crucial putts.

One of those big putts was to birdie No. 17, a par three. While Eichhorn’s putts down the stretch saved him, he wasn't impressed with his short game overall.

“My putting was brutal,” he said with a laugh. “I made the two biggest putts that I had to make, but other than that, I didn't make anything.

“I played a lot better last year,” he added. “And I played here a lot better yesterday (Wednesday). I was getting beat by Avery with I think four holes to go, but I made those big putts to secure the win and to help our team win.”

“I think the way they practice is a huge strength,” Polfus said. “You know, how much time they put into it. And our one through five. We used our fifth golfer's score today instead of our number four, so I just think that helps out a lot. I feel like we're deep, and just their work ethic is always a good thing.”

The top five individual scores were rounded out by Mitchell Borseth of Ontonagon in third with a score of 81, followed by Painesdale-Jeffers' Jacob Zerbst with an 82 and Lake Linden-Hubbell's Jason Sutherland with an 83.

The Wolves and Trojans were followed in the team standings by Chassell with a score of 361, Ontonagon with a 362 and Painesdale-Jeffers with a 374.

PHOTOS: (Top) Carney-Nadeau's Hunter Eichhorn watches his drive on hole No. 15 at Irish Oaks Golf Club in Gladstone during Thursday's Division 3 U.P. Final. Eichhorn was medalist with a 75. (Middle) Cedarville's Avery Freel putts on hole No. 17. Freel finished second overall with a 77. (Photos by Amanda Chaperon.)