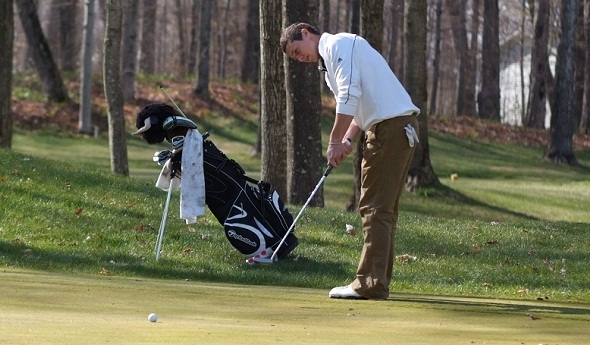 An opposing golf coach joked this spring that he'll always be able to say he beat Manistique's Michael Nagy – when Nagy was 12.

Other opposing coaches consider it a privilege to grant their players the opportunity to walk a match with the reigning Upper Peninsula champion.

What does Nagy mean to U.P. golf? His signing with the University of Tennessee last fall might be considered on par with a basketball player going to a power league like the Atlantic Coast Conference, or a football player heading to the Big 12.

All happen – but rarely, especially to U.P. athletes playing warm-weather sports. Plus, when Nagy signed in November, he guaranteed he’ll become only the second Division I athlete in any sport from Manistique High since Ron Rubick finished his football career at Michigan State in 1963.

“I thought it was a remarkable stat,” Nagy said. “It makes me want to do good and keep getting better.”

Nagy received a Second Half High 5 this week as he puts the finishing touches on a career that has included Upper Peninsula individual championships in 2009 and 2011 and a runner-up finish in 2010 when he fell in a two-hole tie-breaker.

Though the story of a star golfer emerging from the cold-weather north gets told on occasion, a feat like Nagy’s is rather uncommon.

Although high school season starts in mid-March, in Manistique it takes until the start of May for the weather to come around completely.

And while some bigger towns have indoor domes or other facilities where players can hit balls during the winter, Nagy’s indoor practice facility is a net in his garage, plus another smaller net he uses for chipping.

But this fall, he'll begin his college career with the Volunteers, who play in the Southeastern Conference and like many schools in the south fill most of the roster with players from states in warmer climates that allow for more play throughout the year.

“Mike is very hard-working, very humble. That would be the word for it,” Emeralds coach Deb Taylor said. “He has just blown everybody away when he plays. But he’s not the one to go bragging about it.”

Each Peninsula has its own MHSAA Finals for golf, meaning Nagy gets to see the best from the rest of the state only during summer events – the closest of which is a three-hour drive from home, with most more than six. He made trips about twice a month last summer, spending most of July playing in Wisconsin, and still had the kind of success that ranked him among the best in this state for his age group.

Golf isn’t the most popular sport among his Manistique friends. Nagy also played basketball – he set a school record this season with six 3-pointers in a game – but most of his course time spent with friends is low-key.

With golf teammates, he won’t give suggestions unless asked. But players on his and opposing teams no doubt benefit from his presence.

“A lot of coaches now say they are putting so and so with Mike today, (or) they want someone to golf with Mike,” Taylor said. “It makes them better players too. They want that competition.”

Although Nagy also has a job at his home course, Indian Lake in Manistique, he didn’t grow up in a golfing family by the traditional definition. His older brother was friends with Steve Larson, a Manistique grad who went on to become the 2006 Great Lakes Intercollegiate Athletic Conference Player of the Year at Grand Valley State. At 11 or 12, following his brother and Larson, Nagy started giving the game a try.

“I just kinda got hooked on it,” he said.

VanDamme told Volunteers’ head coach Jim Kelson about Nagy, and Kelson came to watch him play – and was sold.

Par at Indian Lakes is 36, and Nagy’s average the last four seasons usually has hovered around that mark. He’s at 35 for nine holes currently, and set a school record as a sophomore with a 31. Although he wasn’t sure if it is an 18-hole school record, Nagy shot a 66 in last year’s Mid-Peninsula Athletic Conference championship tournament at Gwinn’s Red Fox Run. He shot a 60 at last summer's Indian Lake's club championship to set that course's record.

He shot a 74 to win Wednesday’s Negaunee Kiwanis Invitational by five shots – the fourth time he’s won that tournament. He’ll go for his third MHSAA championship the first weekend in June – and then leave a legacy that could go unmatched for years to come. Click to read more about Nagy's dream playing partners and future plans.

PHOTO: Manistique's Michael Nagy has signed with the University of Tennessee and is set to become his high school's first Division I college athlete since 1961. (Photo courtesy of the Manistique Pioneer Tribune.)