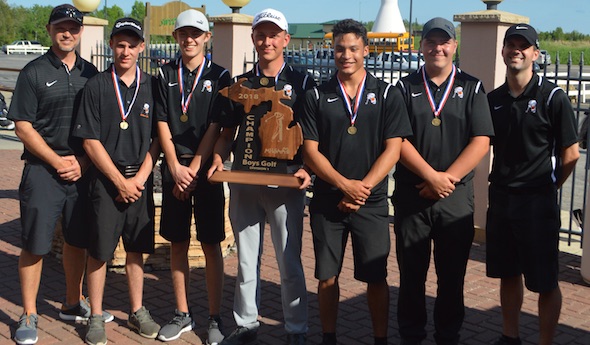 By Mark Johnson
Special for Second Half

The Eskymos were the top team again Thursday, after battling a difficult course at Sweetgrass Golf Club, an afternoon heavy downpour and rain delay and the top U.P. boys golf teams.

“The team performed great,” said Escanaba coach Brian Robinette. “You don’t shoot 317 on a demanding course like this unless your players are focused. This course can beat you down if you let it. Our team was tournament tough today.”

Team balance was the key for the Eskymos, and the 2018 champions were led by senior Nathan Rosseau’s runner-up individual finish (41-34-75). Rosseau said he used the rain delay to his advantage.

“It was a momentum change. I am happy with how I came back on the back nine to shoot a 34,” said Rosseau. “It is awesome to win back-to-back U.P.s, and all our guys were putting up numbers. We played well to win on two tough, tough courses at the GNCs and on this course. Here you are one swing away from a double.”

Sweetgrass played 6,400 yards for the Division 1 championship, using the forward tees. And following the heavy rains, it was a wet golf course before the sun bake and temperatures rose into the 80s for the late afternoon finish on the plush Harris layout.

Robinette praised his senior leader Rosseau and his championship team.

“Nathan is a coach’s dream,” said Robinette. “He is always working on his game, and he puts in the time and I am very proud of all our team winning again this year.”

Gladstone’s Rudy Peterson was the medalist firing a 37-37-74 despite a double bogey on his final hole.

“I hit the ball really well today,” said Peterson. “I played probably the best I have in a long time. My driver was good and my wedges were really good today; I only missed three or four greens.”

Calumet was the team runner-up shooting a 322.

Calumet teammate Tyler Johnson scored a 39-40-79 to tie for fifth.

Robinette’s teams have now won three U.P. team titles with the other championship in 2011.

Gladstone was third in the team standings with a 336 score. Marquette was fourth (340), and Houghton rounded out the top five with a 344 team tally.

Braves’ coach Dane Quigley was disappointed his team did not contend for the title but happy for individual winner Peterson.

“Our team is disappointed, but we have some four-year players who have been with our program a long time and have done well,” said Quigley.

“At our practice round on Wednesday, Rudy shot a 69, and it carried over to the course today. I am impressed with Rudy’s play all season long for us.”

“Jordan finished his junior year playing really well today. He eagled number four on a hole-out from 100 yards and chipped in on a par five for an eagle,” said Smith. “He battled back from some penalty shots and bad shots, and he hung in there and competed to the end.”