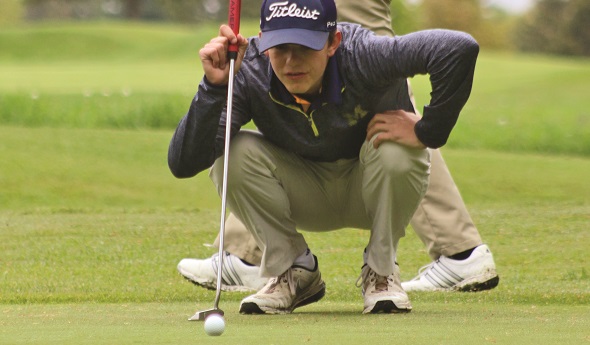 MARQUETTE — It isn’t easy to topple a team that has won the last three titles, but the Escanaba boys golf team pulled it off Wednesday afternoon at the Marquette Golf Club.

The Eskymos unseated Houghton as Upper Peninsula Division 1 champion, outlasting neighboring Gladstone by one stroke (319 to 320) to claim the title and leave Escanaba head coach Brian Robinette with a big smile on his face.

“The boys have had the ability to do something like this all year long, and I kept telling them about the idea of making teams beat you,” Robinette said. “For a while, we weren’t doing that, but little by little, they figured out how to fight their way to good scores. They fought hard today up until the moment that they signed their scorecards, and that was great to see.”

For Gladstone, it was a disappointing end to the day after coming up just short of a title once again. Braves head coach Dane Quigley was a little down afterwards, but he was proud of how his squad performed and likes the group he has coming back next year.

“Today was just a heartbreaker,” he said. “We’ve been trying to get that title the last few years, and I thought we might have the team to do it this time, but it didn’t work out. We actually did pretty well with our numbers three, four and five guys stepping up, but unfortunately, Esky had guys in the 70s and that’s hard to beat. The good thing is that we have some really good golfers coming back next year, and I think we’ll have another good chance to win it.”

Negaunee, which finished second to Houghton last year, took third place this time in the 11-team tournament and had its best performance of the year with a 327. As a result, Miners head coach Dustin Hongisto was very pleased with what he saw.

“I was really happy with how we played,” he said. “We had three solid scores and today was actually our lowest team score of the year. My number one guy (Carter Mason) struggled a little bit today, but he’s had a great career with two conference championships and he was medalist last year, so he has nothing to be ashamed about. But his brother (Jordan) made up for that, and everyone else kind of picked up the slack.”

Marquette tied with the Gremlins for fourth place with a 337, while Calumet finished sixth with 338. 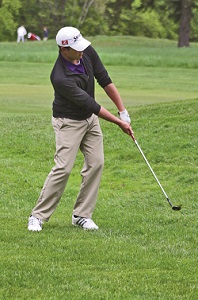 Redmen coach Ben Smith felt his young squad learned a lot and thinks there’s a lot of potential for next season.

“Whenever you host a meet like this, you hope that it will give you a good advantage, and it did a little bit,” he said. “Jordan Jurmu had a solid round (81) after battling some cold weather. We had a couple of guys shoot 85s, and that was good. There was a lot of older guys on the other team, and I think that will help us get a taste of what it takes to win. Hopefully, we can build on today and we can keep plugging away for next season. I think we’re going to see some good things.”

Individually, Houghton senior Ben Strong was the medalist shooting a 73. He was happy with his performance and was glad to end his Gremlins career on a good note.

“I think I had a good day overall,” he said. “I made a couple birdies and kept it together mentally throughout the round today. I played really well my four years in Houghton. My freshman year, I placed fourth and now as a senior, I won U.P. Finals. You can’t get much better than that.”

Menominee’s Evan Kramer took second with a 75, and Negaunee’s Jordan Mason finished third with a 77, while the Eskymos’ Johnny Kositzky and Parker La Pointe as well as Gladstone’s Bryce Douglas tied for fourth at 78.

PHOTOS: (Top) Negaunee’s Carter Mason lines up a putt on the way to shooting an 80 on Wednesday. (Middle) Gladstone’s Bryce Douglas watches his approach shot; he finished fourth individually. (Photos by Rachel Oakley.)