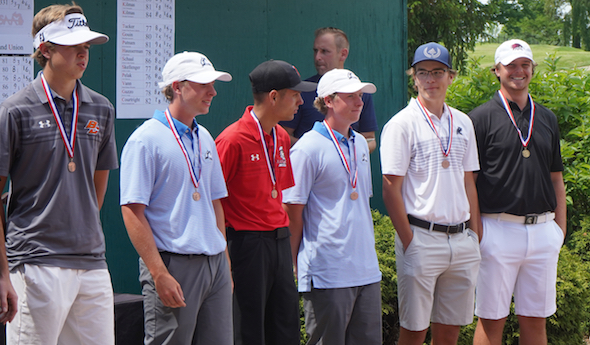 By Tom Lang
Special for Second Half

EAST LANSING – Brad Smithson of Ada Forest Hills Eastern said he signed to play golf with Michigan State because it’s close to home and he likes the facilities.

Maybe now he loves the facilities.

Smithson just won the Division 2 Final at the home of MSU – Forest Akers West Golf Course – four strokes ahead of DeWitt senior Charlie DeLong, who is next headed to Grand Valley State.

“Hopefully this is a good start to a summer that rolls into the fall, once I get to State,” Smithson said. “Very special (to win here). This is where I’ll be playing golf, so it’s very cool that I was able to get it done here.”

Smithson and DeLong both shot 71 for the lowest scores in the first round Friday, but Smithson went one stroke better with a 70 (141 total) in the final to DeLong’s 74 (145) on Saturday. Andrew Kolar of team champion Grand Rapids Forest Hills Northern, and Nick Krueger of Spring Lake, tied for third place at 150. Noah Kolar was one stroke off the lead Friday but closed with 79 for fifth place.

“I got a couple really good breaks I’d say; that kind of kept me in it,” Smithson said of the final round. “A lot of par saves through the back nine and really played pretty solid today, in the wind and pretty tough conditions.

“It was hard work, definitely. It was a grind throughout the day. (Friday) was a lot more rough. A lot more bad breaks. Actually, scored pretty well for how badly I hit it. But today I hit it a lot better, got the breaks I needed and was able to get it done.”

Smithson, playing with DeLong, said he knew he had the lead after the 15th hole by at least two strokes, maybe three. 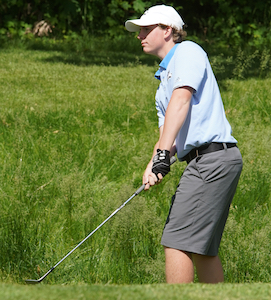 Yet he did close out the day with a long birdie that dropped in the cup on the 18th green when he simply was hoping to lag it close.

DeLong said the back nine was the difference maker.

“We were tied after nine holes, but I struggled off the tee and didn’t really get anything going on the back nine,” he said. “But second in the states isn’t too bad.”

Northern won the team championship despite shooting its worst 18-hole score of the season in the second round. With a 296 on Friday and a comfortable 13-stroke lead over DeWitt heading into Saturday, Northern shot 324 to finish at 620. Eastern shot 309 on Saturday and snuck ahead of the Panthers with a 628 total for runner-up honors, while DeWitt dropped to third place with 309-325-634.

“This feels a lot sweeter just because last year we were right in the hunt and kind of gave it away at the end,” he said of the 2018 runner-up finish to Flint Powers Catholic. “This year we had a great first round, played really well (Friday), that set us up for today. We kind of expected to play better today, and that didn’t happen.

“Anytime you’re in a round like this, you’ve got to just gut it out. And these guys, I commend them for staying in the game – even after hitting balls out of bounds at times, hitting them in the hazards, and not giving up but just grinding through it. We were fortunate to have yesterday’s lead. That helped us hold onto it today.”

Telzerow said he prefers to have a lead after one round instead of trying to fire up the troops for a come-from-behind effort.

“After yesterday we felt good coming into today and thought we could pull it off,” he said about a team that returned four starters from last year. “Pin placements were a little more difficult … but it’s the state finals, it’s the second day … it’s supposed to be hard.”