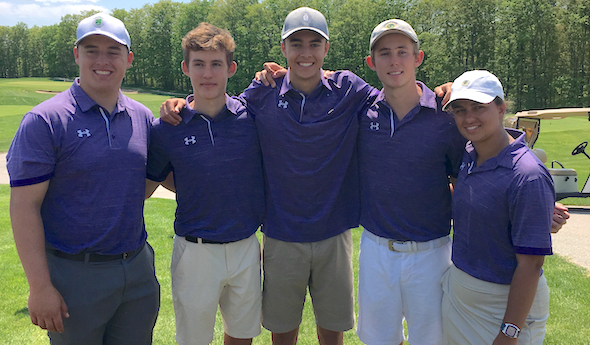 FRANKFORT — On the golf course, Frankfort senior Will Newbold appears to be calm, cool and collected.

It’s an outward impression that mirrors the way Newbold is feeling on the inside too.

Newbold’s easy-going demeanor has served him quite well on the links as he’s helped lead the Panthers to their fifth straight Lower Peninsula Division 4 Golf Finals appearance and sixth in the past eight years.

In a sport that can seem to break even the most stoic of players at times, Newbold doesn’t let his emotions get the best of him, taking the good with the bad in the same even-keeled fashion.

Good scores have been the norm for Newbold, who enters the Finals at Grand Valley State’s Meadows course as the medalist in the Northwest Conference — at 3-under in league play he was the only player under par for the year — and at the Regional he shot a 74 to win by one stroke. In fact, only two times this season has someone topped Newbold on the leaderboard.

The four-year letterwinner generally has been the Panthers’ top performer the past two years and was Frankfort’s low man in its last two trips to the Finals. He fired a 162 as a sophomore as Frankfort finished 12th. His score of 150 last year put him in a tie for eighth overall and the Panthers rose to ninth in the team standings.

The aspirations this season are for a top-five team finish, which would mark the best the Panthers’ boys golf program has ever placed.

“I always look at the state tournament as that’s the real season,” said Frankfort coach Tom Thorr. “That’s when you want to be playing your best. Our goal has always been to be in the top 10 in the state. This year you can’t help but look at the other scores in Division 4. I’m certainly hoping we have a good showing. I think it would be great if my team could finish in the top five.”

The Panthers have some good experience with seniors Jack Reznich and Riley Thorr, along with junior Luke Hammon. Sophomore Daniel Newbold, Will’s younger brother, rounds out Frankfort’s top five, but what the younger Newbold lacks in experience he makes up for with ability. He and Hammon both turned in top-10 performances at the Regional with a pair of rounds at 82.

With Will Newbold at the top of that lineup, the Panthers have a squad capable of meeting their high expectations.

Thorr believes his top player could be in the hunt for medalist honors as well when all is said and done.

“He’s got a chance,” Thorr said. “He’s going to have to play well. There are some good players out there, no doubt. When we get down there, we’ll see them all. He’ll have to rely on that mental game.”

It’s that mental game that has been Will Newbold’s strength and allows him to perform at such a high and consistent level, says his coach.

“Everybody’s going to have a bad shot or a bad hole, or a stretch of holes,” said Tom Thorr. “You have to have the right mentality to get through that. Like Will, if he has a bad shot or a bad hole he’s just got this uncanny ability to just kind of brush it off. ‘Oh well, I’ll get it back.’ It may not be the next hole, but he’s pretty focused. He doesn’t let a whole lot of things rattle him. His mental game is pretty solid. He hits the ball straight. He’s not super long, but he’s real consistent.”

As a collection, the Panthers are a product of their environment. Each of Frankfort’s top five players caddies at nearby Crystal Downs Country Club — a course that is consistently ranked among the best nationally and worldwide by pundits — and they frequently take advantage of the chance to play, taking on the challenging course as they’ve built up their games.

“I try to go out there every night in the summer,” said Will Newbold. “It’s fast, unforgiving. You’ve got to hit spots, or you’re going to be in trouble. The greens are really tough and really hilly. I would say it’s one of the harder (courses) in the state.”

Those daily tests, along with instruction from the likes of local PGA pros Scott Wilson and Ed Laprade, have helped a player like Newbold make huge strides in a relatively short time. Newbold started playing the game only four years ago, but now finds himself in the discussion of the best players in Division 4, with a chance to prove it on the course in his final match of his high school career.

“I’ve spent a lot of time in the summers just grinding at the range and playing golf every day,” he said. “I progressed pretty quickly. I worked so hard in the summer and in the offseason to get better. It’s good to see my hard work being rewarded.”

PHOTO: Frankfort's Will Newbold, second from right, will lead a talented and experienced lineup to the Lower Peninsula Division 4 Final this weekend. (Photo courtesy of the Frankfort golf program.)