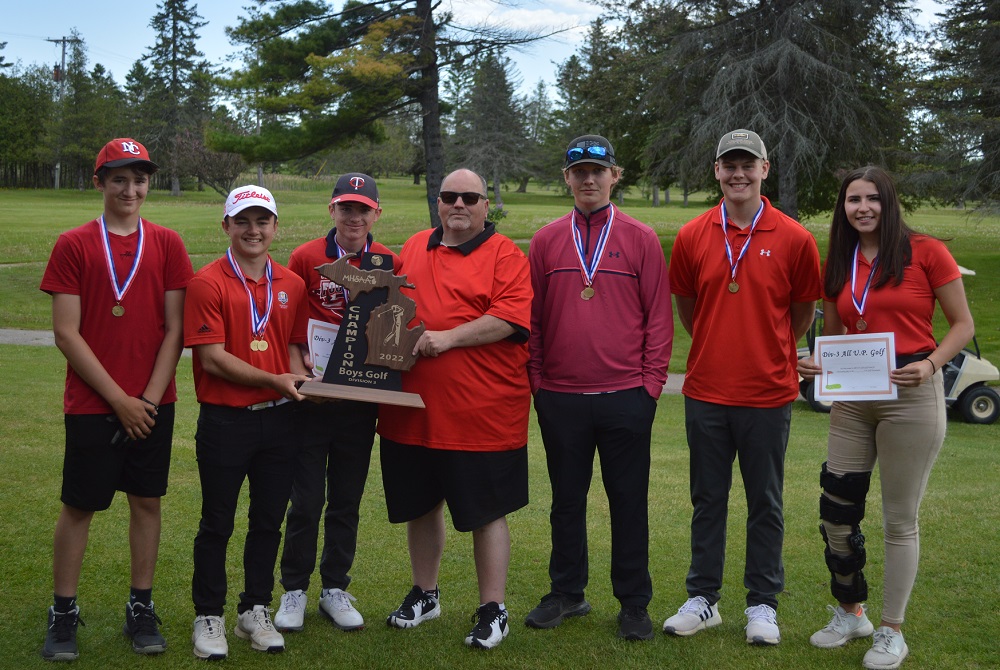 HYDE — Bryson Mercier has gotten used to the idea of finishing on top of the leaderboard throughout his high school golf career.

Mercier’s achievements were part of an historic day for the North Central boys program, which was crowned U.P. Finals team champion for the first time with 350 strokes.

“I didn’t swing the clubs very well today,” said Mercier, who will play golf at South Dakota State University next season. “I had good drives, but every time I got on the greens I was 30 feet away. I couldn’t get any birdies.

“You just have to stay patient in a round like this. I was three under on the last six holes. I finished strong. I started hitting the ball a little better.”

North Central was the Division 3 runner-up a season ago, finishing just two strokes behind champion Chassell.

Mercier also was the Division 3 individual champion in 2019 as a sophomore.

“This is great for the kids and the school,” said Jets coach Scott Farnsworth. “We’ve had some decent teams. This is icing on the cake, especially for Bryson as a senior. This is something that was really nice to have. The individual title was nice, but winning as a team was awesome.”

Mercier, who fired a two-under-par 34 on the back nine, was followed by Rock Mid Peninsula junior Michael Englund and Lake Linden-Hubbell’s Marcus Sutherland at 89.

“The course was a little tougher today,” Mercier said. “The wind was little bit of a factor, and the greens were a little slow – although they do a good job keeping this course in shape.”

Alex Pipkorn and Landen Hansen both shot 90 to tie for fourth individually for the Jets. Austin Farley rounded out the champion’s scoring with a 17th-place individual finish.

Will Immonen, Jerald Majurin and Jack Nelson all carded 98 to tie for 12th individually and lead Ontonagon. Miles McGeshick shot a 91 to tie for sixth, and Dari Hazen came in ninth with a 95 to lead Watersmeet.

Ontonagon most recently was champion back-to-back season in 2018-19.