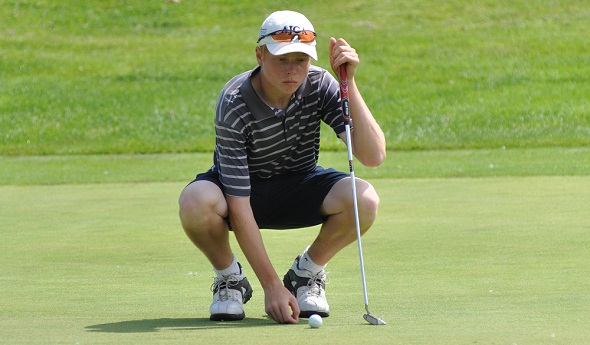 But just because the Sailors are made up of all juniors and freshmen, it doesn’t mean they don’t carry significant experience onto the course.

Juniors Reed Hrynewich, Andrew Van Aels, Joel Maire and Eric Kastelic all were among the team’s top five scorers at last season’s Division 1 Final at Oakland University. And although none placed among the individual top 10, the team finished fifth overall.

“We’re more poised,” Mona Shores coach Tom Wilson said. “We were fifth at the state finals last year, and I think there was a little bit of intimidation there. It was the first time the whole team had been there – Reed had been there as an individual – and I think they’ve picked up a lot from that.”

Mona Shores’ golf team gets Second Half’s team High 5 this week after winning, by a stroke, the always-competitive Traverse City Central Invitational this weekend at Spruce Run and The Wolverine.

The Sailors didn’t finish first in either round over the two-day event. But they finished second in both, shooting 309 on Friday at Spruce Run and 297 on Saturday at The Wolverine for a combined score of 606 strokes – one fewer than Division 1 top-ranked Grand Rapids Forest Hills Central and two fewer than then-No. 5 Traverse City West.

Mona Shores is ranked No. 2 in Division 1. And as evidence of the respect given to the Traverse City tournament, three more teams from the weekend’s field have since been added to that state poll’s top 10.

Hrynewich shot a 69 to finish second at the Wolverine and a 75 to finish fifth at Spruce Run, and Van Aels finished eighth individually in both weekend rounds. Maire and Kastelic also both shot at least 82 in both rounds, and together the four have been making significant contributions since the start of high school.

“They were kind of leading the pack when they were freshmen,” said Wilson – who has led four teams to MHSAA championships, including two over the last 11 seasons.

But the juniors represent part of a line-up loaded with potential. Freshmen Glen Kastelic and Mitchell White fill the remaining starting spots. At Monday’s O-K Black Jamboree at Watermark Golf Course, also a win, both freshmen shot 36, with Hrynewich 37 and Van Aelt a 38.

Hrynewich is a significant presence at the top of the lineup. He’s been an all-stater his first two seasons – he tied for sixth in at the Division 1 Final as a freshman – and also was a hockey all-stater this winter.

A skillful swing runs in the family. His father Tim played two seasons in the NHL for the Pittsburgh Penguins. And Reed’s twin sister also is among the state’s golfing elite – a three-time top-five Finals placer as Mona Shores’ girls golf team has won the last three Division 2 championships.

The Kastelic brothers also are strong hockey players, and Wilson said there’s certainly a connection between the two sports and their reliance on strong hand-eye coordination.

He’s had strong hockey players lead some of his other top Mona Shores teams – and this one is beginning to show a championship look as well.