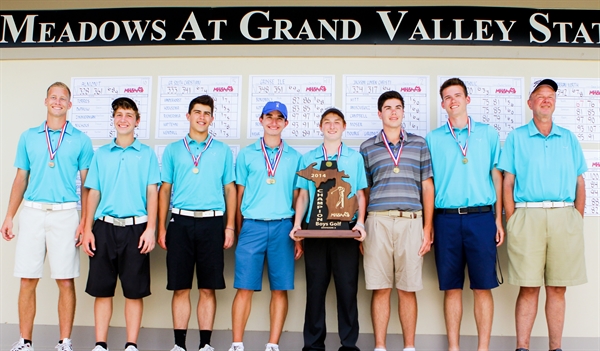 The Cougars were able to duplicate last year’s feat, winning the MHSAA Lower Peninsula Division 3 Final on Saturday at The Meadows at Grand Valley State University.

Lansing Catholic made it back-to-back titles by firing a 633 total. Runner-up Jackson Lumen Christi finished eight shots back and shot a 641, while Kalkaska was third at 645.

“The mindset going into the season with the players we had back was to repeat,” Cougars coach Charlie Furney said. “From the very beginning, that was our goal, and I think the key to this year compared to last year was they all lowered their stroke averages.

“We averaged 10 strokes better this year for every 18 holes we played, and we did that because of depth. All five of our kids could score in the 70s anytime they wanted.”

Ironically, it was a player who didn’t compete in last year’s Finals that set the tone for Lansing Catholic.

Junior Patrick Gillespie, the team’s No. 5 player, led the Cougars and tied for fourth individually after shooting a 152 with rounds of 77 and 75.

“It’s been an awesome couple of days,” Gillespie said. “I didn’t get to play in the state finals last year, and that’s what pushed me to get there this year. I hit it straight the last two days, and my drives were really good.”

Furney was impressed by Gillespie’s play, which made the coach reconsider his all-state nominees.

“He carried us, and he had a mission,” Furney said. “He told me at the beginning of the tournament, ‘if I shoot a couple scores in the 70s do you think you can put me up for all-state?’ because he was our fifth guy and I was thinking about putting four up. So he obviously convinced me that I’m going to have to put him up.”

“Knowing that we pretty much had our entire team coming back, we knew we had a good chance of winning a state championship and that was the goal all year,” Marshall said. “That’s how we prepared in each tournament. Just go out there and win, and we did that pretty consistently.”

Marshall said improved depth was a major factor in the team’s success. It was the program’s sixth Finals title.

“That’s been a major theme the entire year,” he said. “Knowing you have great players who are going to back you up takes a lot of the pressure off, especially when you know you’re not playing your best.”

The Cougars fired an impressive 313 in the first round to open up an eight-stroke gap. They shot 320 on Saturday, and the lead proved too much for their competitors to overcome.

“(Friday) was very important,” Marshall said. “We knew we had to jump out to an early lead, and that’s what Coach was telling us the entire week.”

Jackson Lumen Christi began the final round in fourth place, but jumped to second after recording a tournament-low 317.

It was the Titans’ second straight runner-up finish after winning four straight Finals from 2009-2012.

“We’re really pleased with how everything turned out,” Lumen Christi coach Charles Saines said. “At the beginning of the year we returned some experience, but not a lot of experience. We had two that had been to the state finals, so to finish second is remarkable for our squad. They showed a lot of heart and set the low round of the day.”

Sparks, a sophomore, shot a stellar 5-under 67 on Friday and carded a 76 on Saturday to cruise to his first title.

He finished with a 1-under 143 total and was the only golfer to shoot under par.

“Amazing, and I’ve been dreaming about this,” Sparks said. “My brother came in second here, and I always wanted to beat him. To win a state championship is unreal, and it really hasn’t set in yet. I’m sure when I go to a tournament down in Kentucky (on Sunday) that it will set in a little bit.”

Sparks was 5-under on the back Friday to gain control. He led by six shots entering Saturday.

“I just wanted to play steady and play my game,” Sparks said. “I got a little mad at myself when I had a bogey or two, but I came back with a birdie and played steady.”

PHOTOS: (Top) Lansing Catholic stands at The Meadows scoreboard after winning its second straight Lower Peninsula Division 3 championship. (Middle) A competitor lines up a putt during Saturday’s second round. (Click to see more at HighSchoolsSportsScene.com.)