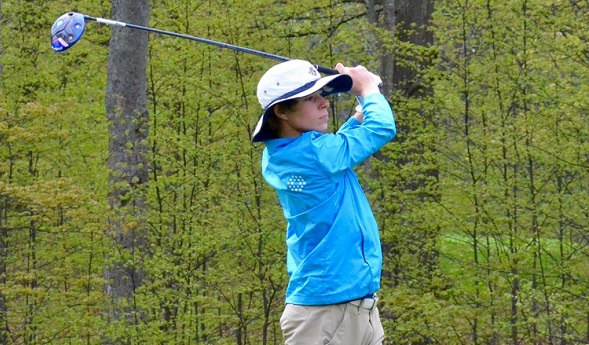 Gouin strung together four straight individual first places over the last two weeks to lead his team on a similarly stunning streak of success. From May 11-18, Gouin finished first at four straight 18-hole events, going lowest with a 68 at the Gaylord Blue Devil Open on May 16 to earn the Michigan Army National Guard “Performance of the Week.” His team, meanwhile, had won nine straight events through Wednesday and surged to No. 3 in the Lower Peninsula Division 2 coaches poll – impressive especially since the team didn’t make it out of Regionals a year ago.

That first 18-hole event was the Ogemaw Heights Invitational at the Dream Golf Course, where he shot a 77 to finish as co-medalist. Next came Gaylord’s turn to host the Big North Conference at Treetops North’s Tradition course, where Gouin fired at even-par 70 to finish first. He then did something that almost defied explanation – he switched irons between events, didn’t tell his coach, and then shot a 68 to win the Blue Devil Open at Tradition. Gouin added a first-place 76 at the Big North event at River’s Edge in Alpena to cap the personal run.

Gouin has averaged 78.8 strokes this spring over 13 events, often through tough weather typical to the north this time of year. He also wrestles at 103 pounds during the winter for an annually ranked team in Division 2 – see below for how that’s paid off in his golf game – and played soccer in the fall. As noted above, Gaylord didn’t make the MHSAA Finals last season, finishing only ninth at its Regional while starting three freshmen and a sophomore. Those then-underclassmen are starters again, and Gaylord is the likely favorite at next Thursday’s Regional at Lincoln Hills in Ludington.

Coach Tom Johnson said: “The exciting thing about Brendon is he is just a sophomore. He has no fear on the course. He always seems to work his way out of trouble no matter the circumstances. One bad shot does not lead to another. And he always wants to be the medalist in every tournament we play, knowing that his success is the best way to help out his team’s goal of trying to win every tournament they play in. What I really like about him is that he is never satisfied and works extremely hard to be successful. … The beauty of this team is that Brendon is surrounded by some really good young players that push him to excel to his best. We have sophomore Kyle Putnam that averages 80.3, sophomore Joe Kowatch averages 84.0 and junior Nick Rowley averages 82.1. The best for this team, hopefully, is yet to come. Their potential is unlimited.”

Performance Point: “The day before I ended up shooting a 70, my grandpa (Jim Gilbert, a former tour pro) asked, ‘What’s the number today?’ And I said 68,” Gouin recalled of the Blue Devil Open round. “I went out and shot 68, and it was the lowest round (303) we’ve had as a group, as a team. Last year at our first tournament, we had three freshmen and (shot) our best team score. It was a 315, and we never beat that all year, so to go out this year and beat it more than once was just great for us. … Everything (for me) clicked for a while. I was striking the ball great, my putting was very good, and I had confidence on the course. I was playing aggressively, going right at the pin and trying to do that every time.”

Pressure player: “For some of us, there might be more pressure. I’m different from all the other players; I like pressure. I like the feeling of knowing I have to do good.”

Attack mode: “The way I look at it, if I’m in trouble I don’t look anywhere. My mental (outlook) is I’m not making a par, I’m making a birdie. I’m very aggressive; my grandpa said he’s never seen anyone play so aggressively. It’s very different, my style of playing. A lot of it came from wrestling. I’m not very fearful. When I used to do snocross racing, I’d do anything.”

Grappling with golf: “(Wrestling) got me physically prepared, and mentally. Coach (Jerry) LaJoie is such a great coach. He got me mentally prepared for golf; if you’re not there to win, you shouldn’t be there at all. He’s helped me out so much in every possible way. Even if he knows it or not, he still did.”

On the rise: “We’re really a young team still. Our top four are all below juniors; we have a junior as our oldest. We’re still growing, and we’re all clicking. We have a lot of talent, and we’re starting to get better. We have two or three in the 70s; next year we’ll have three or four in the 70s. We’re going to have a good shot at getting to the top of state … but nine (wins) in a row doesn’t mean anything going into Regionals.”