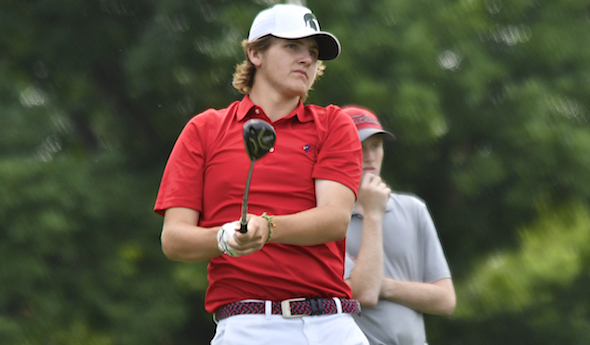 Major opportunities – and some intriguing challenges – are among main storylines for this weekend’s MHSAA Lower Peninsula Boys Golf Finals.

Below are a handful of possible team and individual favorites at each Final. First-round play tees off at 9 a.m. Friday, with the final round beginning at 9 a.m. Saturday. Click for a full list of Finals qualifiers and Regional results.

LP Division 1 at The Fortress in Frankenmuth

Grosse Pointe South broke Detroit Catholic Central’s three-year hold on the LPD1 championship last season, and both should be in the mix again. Rockford posted its highest Finals finish ever a year ago and will be aiming for its first title. De La Salle also is seeking its first championship, and top-ranked Clarkston its first since winning Class A in 1994. Clarkston, Rockford and No. 5 Lake Orion all broke 300 at their respective Regionals.

Clarkston: After finishing fourth in 2017, the Wolves missed making the Finals field last spring by a stroke. Clarkston came back and dominated last week’s Regional at Pine Knob, shooting a 292 to finish 11 strokes ahead of a field that included No. 7 Detroit Catholic Central and No. 6 Hartland. Senior Noah Bridgeman shot 71 to finish first individually, and seniors Patrick Deardorff and Harry Bowman tied for second, one stroke back. All three were in the Finals lineup two years ago as well.

Warren De La Salle: The Pilots missed last season’s Finals even more tragically than Clarkston, tying for the third spot at their Regional and then losing the fifth-score tie-breaker by a stroke. This time De La Salle won its Regional at The Orchards with a 303, three strokes lower than No. 8 Grosse Pointe South and nine better than No. 4 Bloomfield Hills Brother Rice.

Rockford: The Rams have improved from 15th to fifth to second the last three Finals and enter this weekend coming off a win at The Meadows with a 294 that bettered the Regional field by 13 strokes. Senior Kevin Healy is a four-year varsity starter and rose from tied for eighth individually in 2017 to third last spring. All five Rams shot between 73-76 at the Regional, Healy and sophomore CJ Stephan leading with 73s that tied for fourth.

Other individuals of note: Healy is joined among top-10 returnees by Grosse Pointe South senior Coalter Smith (tied for fourth) and Portage Central junior Will Anderson (tied for eighth). Smith also finished third as a sophomore and is a four-year starter. He shot a 70 at his Regional, and Caledonia senior Cam Poll (68) was the only LPD1 golfer to go lower last week. Joining Bridgeman, Poll and Smith among Regional champs were Grand Blanc junior Ranveer Ajimal, Sterling Heights Stevenson senior Justin McCown and Ann Arbor Pioneer junior Colin Flanders.

Reigning champion Powers didn’t qualify for the Finals, and Forest Hills Northern will look to make the jump after finishing just three strokes behind the Chargers last season. FHN is seeking its first championship in this sport since winning Class C in 1983. DeWitt is playing for its fourth Finals title in 10 seasons after coming in eighth but only 21 strokes off the lead last spring. Forest Hills Eastern was 10th last year and is seeking its first title, having finished runner-up in 2014.

Grand Rapids Forest Hills Northern: The Huskies have been hovering around a potential title, tying for fourth in 2016, eighth in 2017 and finishing second alone last season. They return their entire lineup after just missing out, and senior Andrew Kolar was third individually last season. Forest Hills Northern won its Regional at Gaylord Country Club by four strokes ahead of Forest Hills Eastern, led by senior Noah Kolar (71) finishing second individually.

DeWitt: The Panthers shot the lowest Regional score in Division 2 last week, 296 at Eldorado, to finish ahead of No. 9 Haslett by 20 strokes. Senior Charlie DeLong shot a 66 to finish first by two strokes as three DeWitt golfers placed among the top five. He tied for fourth individually last season and is the only senior among the team’s top five.

Ada Forest Hills Eastern: The Hawks tied for fourth in 2016, finished third in 2017 and then fell back to 10th last season, but should make a run at the top also returning all five starters from last year’s run. Senior Brad Smithson finished sixth individually a year ago and tied for third as a sophomore, and he won the Regional in Gaylord by five strokes with a 66.

Big Rapids is seeking its first championship since 2008 and has been on the verge, finishing runner-up the last two seasons – and last year missing out on the title on a fifth-golfer tie-breaker. Reigning champion Hanover-Horton didn’t make the field this weekend, but the Cardinals this time must face NorthPointe Christian, last season’s Division 4 title winner. Meanwhile, Jackson Lumen Christi should be in the mix to add a sixth championship in 11 seasons.

Big Rapids: The Cardinals also bring two starters back this weekend, reigning Division 3 individual champion Pierce Morrissey and Owen Seay, who tied for seventh in 2018. The pair of seniors took first and tied for third, respectively, at their Regional at A-Ga-Ming, Seay with junior teammate Trevor Woodard. Big Rapids shot a 301 to clear a field including No. 9 Elk Rapids and No. 10 Cheboygan by 26 strokes.

Jackson Lumen Christi: After winning the championship in 2017, the Titans came in fifth last year with a mostly new group. Four starters are back this time, including senior Tanner Schnell who tied for fourth last season and also played for the title-winning team two years ago. Lumen Christi shot a 314 to win the Regional at Cascades by seven strokes, finishing ahead of a field including No. 8 Leslie and No. 4 Napoleon. Junior Conor Spencer finished second and junior Matt Saunders sixth at the Regional – both also started last season.

Other individuals of note: St. Louis senior Grant Mills tied for ninth at last season’s Final and is the only other top-10 placer back at this tournament. He joined Morrissey among Regional winners last week, as did West Catholic junior Aaron Ryan, Constantine senior Brendon Patmalnieks, Hanover-Horton junior Jack Brockie and Grosse Ile junior Evan Johnson. Ryan shot a 69 for the division’s lowest score of the tournament round.

LP Division 4 at The Meadows at Grand Valley State

After winning consecutive championships in 2016 and 2017, Everest Collegiate finished runner-up to NorthPointe Christian a year ago. As noted above, NorthPointe is playing in Division 3 this weekend, and Everest Collegiate is the favorite again. Hackett was fourth and Liggett fifth, respectively, at last season’s Final.

Kalamazoo Hackett: The Irish are seeking their first championship since 2013 and will make a run with their four leading scorers from the 2018 Final. All five of this weekend’s golfers placed among the top eight at the Regional at Milham Park as Hackett shot a division-best 308 to win by 45 strokes. Sophomore Ryan Chafty finished first and junior Will Verduzco and sophomore Tommy Keyte tied for second. Verduzco just missed the top 10 at last year’s Final but finished fifth in 2017.

Grosse Pointe Woods University Liggett: The Knights are seeking their first Finals title in this sport since 1982 and made a jump last season to fifth from 13th in 2017. Two starters are back this weekend – junior Colin Degnore was second at last week’s Regional as three Liggett golfers finished among the top six with Everest Collegiate in the same field.

PHOTO: Big Rapids’ Pierce Morrissey watches one of his shots on the way to winning the LP Division 3 championship in 2018. (Click to see more from HighSchoolSportsScene.com.)