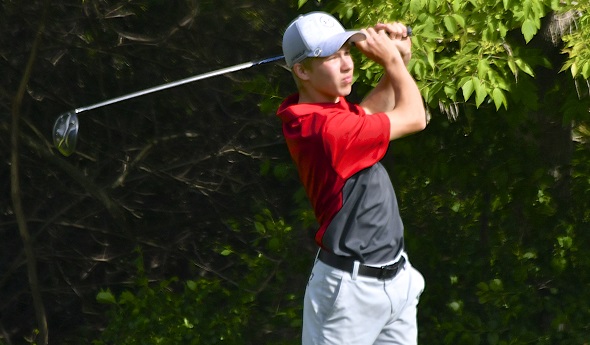 This could be a weekend of coincidence as all four 2017 Lower Peninsula Boys Golf Finals runners-up are in position to take the most challenging last step and become MHSAA champions.

Below are a handful of possible team and individual favorites at each Final. First-round play tees off at 9 a.m. Friday, with the final round beginning at 9 a.m. Saturday. Click for a full list of Finals qualifiers and Regional results.

LP Division 1 at The Meadows at Grand Valley State University

Detroit Catholic Central has won the last three LPD1 championships, and Grosse Pointe South has finished second both of the last two seasons. Twelve of 18 Finals qualifiers shot 315 or lower at their Regionals, which could signal this being a far tighter race than last season when the Shamrocks won by 16 and the Blue Devils cleared third place by another 13 strokes.

Grosse Pointe South: The Blue Devils shot a 300 to win their Regional at The Orchards in Washington ahead of No. 5 Birmingham Brother Rice and No. 3 Seaholm. The top four scorers all shot 78 or better to finish 10th or higher individually, led by runner-up Patrick Sullivan and third-place Coalter Smith. They are two of four back from last season’s Finals lineup, and Smith came in third individually at last year’s championship event.

Hartland: The Eagles entered last week ranked No. 9, but get a mention here after winning a Regional at Dunham Hills in Hartland with a 303, ahead of No. 10 Northville, No. 7 DCC and No. 2 Clarkston. Hartland finished ninth last season, and three of those starters are back this weekend including senior Mitchell Cotten. He tied for the team’s lowest score at the 2017 Finals and finished second overall at last week’s Regional.

Rockford: The Rams are seeking their first MHSAA championship in this sport, but finished fifth last season and look like a contender after shooting 310 to win their Regional at Thornapple Pointe in Grand Rapids by 21 strokes. Junior Kevin Healy was the individual runner-up at 74 and tied for eighth at the 2017 Final. Sophomore Nathan Barton and freshman Oliver Haberle also finished among the top 10 at the Regional, and Barton and senior Daniel Froumis were part of the lineup during last season’s run.

Other individuals of note: Ann Arbor Skyline sophomore Cam Cowland and Birmingham Seaholm senior Henry Scavone were among others who tied for eighth at last year’s Final. Scavone was 14th at his Regional last week but should be in form while leading one of the team contenders, and Cowland was medalist at the Regional at Polo Fields in Ann Arbor in leading his team to the championship. Brother Rice senior Brendan O’Rouke shot 68 to win at the Orchards, while New Baltimore Anchor Bay seniors Tory Saunby and Michael Romanoski both shot 68 to tie for first in leading their team to the title at Oakland’s Twin Lakes. Northville senior Jimmy Dales, Midland Dow sophomore Anthony Zeitler and Portage Central sophomore Will Anderson also won Regionals, Anderson shooting a 66 at Thornapple Pointe.

St. Johns’ two-year reign will come to end; the Redwings didn’t qualify this spring after graduating most of their lineup in 2017. Powers finished 24 strokes back a year ago but also 15 strokes ahead of the rest of the field and could be in line for its first title since 2001. Top-ranked Forest Hills Northern is playing for its first since 1983, but finished only second at its Regional to No. 4 Gaylord. Seven teams shot 312 or better at Regionals, led by No. 8 East Grand Rapids at 298.

Flint Powers Catholic: The Chargers won their Regional at Hawk Hollow in East Lansing with a 303, two strokes better than No. 6 DeWitt. Three golfers are back from last season’s runner-up run, led by senior Zach Hopkins – he tied for 10th at last year’s Final and for third with sophomore teammate Grant Tucker at last week’s Regional. Powers’ top four all broke 80 at Hawk Hollow.

Gaylord: The Blue Devils are aiming for their first top-two Finals finish after coming in 11th last season. They shot a 311 to win the Regional at Cedar Chase in Cedar Springs by seven over Forest Hills Northern, with junior Brendon Gouin the individual medalist at 72. Gaylord’s top four finished among the top nine individuals, and all four were part of last season’s lineup as well.

Grand Rapids Forest Hills Northern: Despite the runner-up Regional finish, it’s tough to not see the Huskies among the favorites with five of their top six back from last season’s eighth-place (tied) Finals finish. Three players finished among the top six placers, with ties, at the Regional led by fourth-place junior Noah Kolar. Forest Hills Northern has been ranked No. 1 since the end of April.

Jackson Lumen Christi and Lansing Catholic have won eight of the last nine championships in this division. But Grosse Ile is favored to win its first since 2003, and Big Rapids is seeking its first since 2008 after finishing runner-up and eight strokes back a year ago.

Big Rapids: Four of the five starters from last season’s runner-up team will be back this weekend, led by junior Pierce Morrissey. He tied for fifth at last year’s Final and was the medalist last week at Willow Wood in Portland as the Cardinals edged No. 8 Grand Rapids West Catholic by a stroke for the team title. Two others finished among the top seven individually as Big Rapids shot a 314.

Grosse Ile: The Red Devils have held down the top spot in the state poll since late April, coming off a fourth-place finish in Division 2 a year ago. Three golfers are back from the six that played at least a round at last year’s Final, and senior Joey Test was the medalist last week at Hantz Golf Club in Tecumseh as Grosse Ile won the team Regional title.

Hanover-Horton: The No. 4 Comets get the slight nod ahead of Schoolcraft after winning their Regional ahead of reigning champ and current No. 9 Jackson Lumen Christi last week. Hanover-Horton shot a 313 at Hunters Ridge in Howell to clear the Titans by 11 strokes, led by sophomore and individual runner-up Jack Brockie. Senior Garret Spink tied for fourth at the Regional and tied for fifth at last year’s Final as the Comets finished fifth as a team in 2017.

Other individuals of note: In addition to Spink and Morrissey, four others are back from last year’s top 10. Tawas senior Daniel Shattuck was runner-up last spring after advancing to a playoff for the top spot. Portland sophomore Zach Pier is back after tying for third, while Houghton Lake senior Brock Decker also tied for fifth and Grand Rapids West Catholic senior Anderson Ryan was eighth. Ludington senior Evan McKinley finished a stroke ahead of Decker last week at Grandview Country Club in Kalkaska for a Regional title, while Morrissey won by a stroke over Pier. Jonesville senior Grant Baker, Napoleon freshman Evan Brzyski and St. Louis junior Grant Mills also won Regional titles.

Clarkston Everest Collegiate will seek to win its third straight Division 4 championship, but NorthPointe was last year’s runner-up 11 strokes back – and 13 ahead of the rest of the field. Suttons Bay didn’t make the field as a team last year but has one of best individuals on the card. Those three teams were the only three to clear 330 at last week’s Regionals.

Clarkston Everest College: Four of five starters are back from last year’s championship team, and three were on the 2016 winner as well. Junior Mitch Lowney was the runner-up at the 2017 Final and also won last week’s Regional at Whitmore Lake Golf Links as his team cleared the field by 24 strokes. Junior Mia Korns was the one player not in last year’s starting lineup, but she finished third at last week’s Regional and was seventh at the 2016 Division 4 Girls Final.

Suttons Bay: The Norsemen won Division 4 as recently as 2015, and although they didn’t play the Final as a team last year senior Thomas Hursey tied for eighth as an individual qualifier. Suttons Bay won the Regional at Grand Traverse Resort last week by 21 strokes with Hursey finishing first and senior Parker LaPointe tying for second.