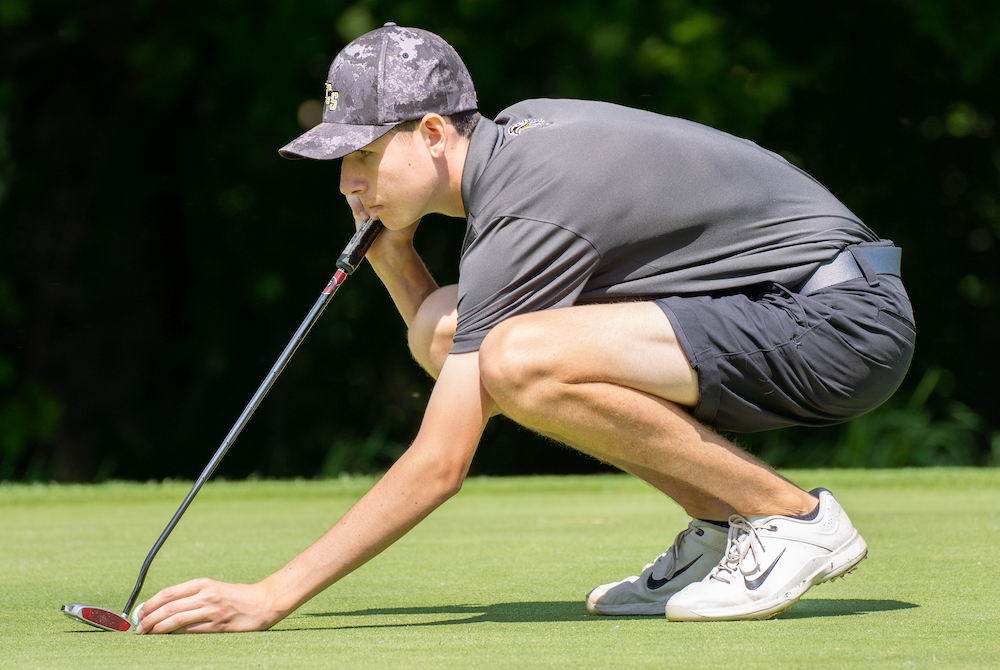 EAST LANSING – Caden Kinnas had an idea that he and his teammates on the Lansing Christian boys golf team were doing well.

But he didn’t want to hear how well until Saturday’s round at the Lower Peninsula Division 4 Finals was over.

“That makes me a little bit nervous when I see the scoreboard,” the Lansing Christian senior said. “I did that yesterday on my third-to-last hole, and then I ended up tripling then parring out for my last two holes. Today, I was like, ‘I’m not going to look at the leaderboard once.’ I didn’t even know we shot a 304 until five minutes ago. I kept hearing whispers like, ‘You’re crushing us’ from other people, but I was like, ‘Don’t tell me. Let me just play and finish this round.’”

Kinnas and the Pilgrims were crushing people as they cruised to the Division 4 title with a two-day score of 622 (318 Friday, 304 Saturday) at Forest Akers West, 24 shots better than second-place Clarkston Everest Collegiate. Maple City Glen Lake was third at 655, followed by Kalamazoo Hackett Catholic Prep at 665 and Charlevoix at 669.

It was the first Finals title for Lansing Christian, which was the runner-up to Kalamazoo Hackett a year ago. The Pilgrims’ five-man lineup featured four seniors.

“It’s a process – you finish 14th your first year, you get to the big dance and you just get a glimpse of it and it just gets you excited, like, ‘What if?’” Lansing Christian coach Jason Block said. “Everybody from summer leagues to winter simulators to the chalk talks that we do on course management – the courses we played this year … I can’t imagine a schedule tougher to get these guys ready for today. I always think of Nick Saban, trust the process. Just do the little things one day after another, one match after another. To be able to do it on the last day, pretty exciting.” 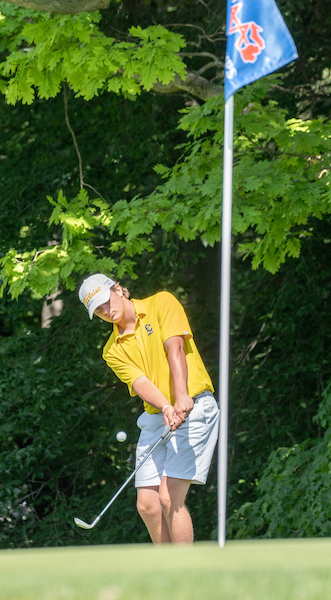 Kinnas, a senior, led the way for Lansing Christian, shooting a 151 and tying 2021 individual champion Remy Stalcup of Everest Collegiate in third place.

He was one of three Pilgrims to finish in the top 10, as senior Davis Garrett tied for fifth at 155 and junior Baylor Brogan tied for eighth at 156. Senior William Combs rounded out the scoring with a 160, while senior Isaac Haley shot a 180.

The 14th-place finish in 2019 came from a Lansing Christian team filled with freshmen. After that tournament, they took a picture with the championship trophy, which was won by Hackett.

That was all about motivation and putting the possibility of taking a picture with their own trophy into the heads of each of the golfers.

“We were happy to make it to state that year,” Block said. “Fast forward to 2021, we play at the Fortress against Hackett, with Hackett, and we end up losing the two-day tournament by six strokes. We go home with a runner-up trophy – happy, but you wanted to win the championship trophy. Coming into this year, we wanted to do three things: want to win the conference championship, win the Regional championship, and win the state championship.”

Kinnas, who didn’t play on that 2019 team, said he thought it was a little odd when he first saw the picture, but was happy to help make it happen three years later.

“Knowing that we had the chance, and realizing the skill we had throughout the last two years, we realized it was pretty winnable,” Kinnas said. “I think that makes it a little more emotional, too, knowing that four out of our five starters are seniors. It really makes you appreciate every hole you play and that we couldn’t have done this without one another.”

The individual title was equally drama free, as Andrus played two incredibly clean rounds on his way to his six-stroke victory.

He did, though, allow himself to check the leaderboard prior to the final hole.

“I didn’t check the leaderboard until my last hole,” he said. “My coach told me I had a big lead. I wouldn’t say I was loose, maybe more conservative.”

For the weekend, Andrus had six birdies, two bogies and two double bogies to go with 26 pars.

“I hit my driver really well,” Andrus said. “I struggled a little bit at the beginning today, but my short game saved me. Overall, my chipping and driving really helped me out.”