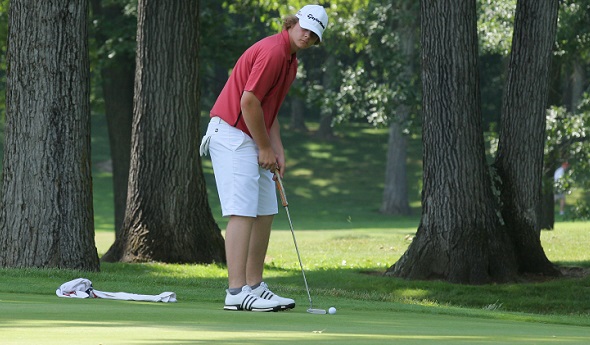 GRAND RAPIDS – While most high school golfers were spending this winter counting down the days until the snow melted, one Grand Rapids-area golfer was measuring his game against the top players around the world.

Bradley Smithson, a junior at Ada Forest Hills Eastern, was invited to take part in a prestigious event hosted by one of the most recognizable names in professional golf.

He was one of only two players from Michigan; the other was Patrick Sullivan of Grosse Pointe.

The tournament included a talented field of junior golfers from the United States, as well as Spain and Morocco.

Smithson shot 83 and 75, but wound up missing the cut by four strokes.

“I missed the cut, but that was a great experience, and I took a lot away from that,” Smithson said. “Dustin set it up like a professional tournament and made it feel like we were on tour. We had tour yardage books, we had our own locker and we had nameplates on the range.

“In the first round I played with a kid who committed to Virginia and another one to USC, and they were two years younger than me. The competition was absolutely excellent.”

Smithson also made a name for himself last summer when he finished among the top 30 at the Michigan Open.

It was an event that saw him compete against his father Gary, a PGA Professional at Quail Ridge Golf Course.

“I loved it,” Smithson said. “Competing against my father and all that stuff was a lot of fun. The golf course was absolutely perfect, and it was weird to be only four groups off the lead group and playing with two guys who were trying to make it on the tour.

“Being in that type of big tournament, you need to hit shots that you needed to hit, and your game definitely had to be on point that week.”

Smithson hopes to parlay those experiences into another successful high school season.

As a sophomore, Smithson tied for third individually at the MHSAA Lower Peninsula Division 2 Final. He also helped the Hawks to a third-place finish as a team.

“I had expectations to try and win it, but I knew there was going to be some good competition and I definitely had to play well in order to win,” Smithson said. “It was going to take a good score to win, and it did. I was pretty happy with how I played, and I put myself in good position after the first round. We were in there as a team, too, and we all played well in the second round, which was just as good.” 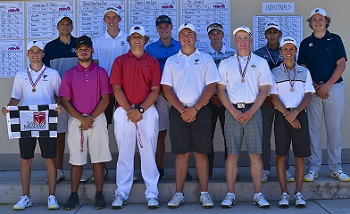 Smithson ended his season with all-state honors, while averaging 37.5 strokes for nine holes and 75.4 strokes for 18.

He has higher aspirations for this season, both individually and for his team.

“Last year was a pretty good season, but I didn’t accomplish all the goals I would like, which is (all-state) Super Team, but that’s for sure going to be a goal this year,” Smithson said. “I want to make it back to state and hopefully be in contention individually and as a team. We’re looking pretty good again.”

Smithson will be the catalyst on a squad that returns five golfers under first-year coach Frank Jenks.

“I just love watching him play, and he’s a really good kid,” Jenks said. “Now that I’ve been around him, he’s not only a good kid, but he’s a hard worker. Now I know why he’s so good. He cares about the game, and he puts the time and effort in. That’s a coach’s dream.”

Smithson started playing golf as a toddler and gained a wealth of knowledge from being around his father.

“I’ve learned a tremendous amount from my dad,” Smithson said. “Growing up all my life, sitting in the golf cart next to him and just seeing how he plays golf. Not so much attacking with yardages, but where to hit it and golf management.”

Smithson is long off the tee and a consistent putter. However, his wedge game has become a point of emphasis.

“I’ve worked very hard in the offseason on my wedges and have seen it pay off the first couple weeks,” he said. “Playing in Myrtle Beach, my wedges were a very big part and I saw improvement with those. It’s getting to where it needs to be.”

Smithson already has made his college choice. He committed to Michigan State following his freshman year.

Smithson was impressed with the facilities and coaching staff at MSU, and now he won’t be burdened by the pressures of the recruiting process.

“I won’t have that monkey on my back of having to perform well and getting those coaches out there looking at me,” Smithson said. “I have that done, and now I can just go out there and play golf and not have to worry about scores.”

PHOTOS: (Top) Ada Forest Hills Eastern’s Bradley Smithson lines up a putt during the 2016 Lower Peninsula Division 2 Final at Bedford Valley. (Middle) Smith, front and third from left, stands with the rest of the individual leaders after last season’s Final at The Meadows at Grand Valley State University. (Click to see more from HighSchoolSportsScene.com.)