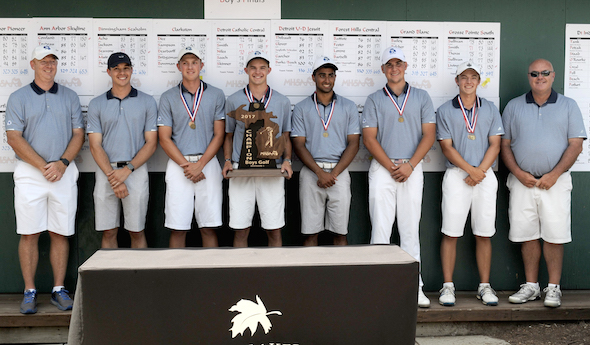 EAST LANSING – For the past three seasons, the biggest drama with Detroit Catholic Central’s boys golf team hasn’t been whether or not it would win tournaments it competed in.

Instead, it was a matter of how much the Shamrocks would win by and which player in its loaded lineup would be the medalist.

It’s been a constant battle of bragging rights for a Catholic Central team which entered this weekend’s Lower Peninsula Division 1 Final at Michigan State University’s Forest Akers West having won all of its tournaments the past two years and with each starter finishing as medalist at least once during the run.

“That’s what we strive for,” senior Sean Niles said.

On Saturday, Niles ended up getting the final bragging rights at the finale for a senior class that couldn’t have been much more decorated.

Niles won the individual Division 1 title, shooting a two-day score of 139 to prevail by one shot over Plymouth senior Justin Kapke (70-70).

Needless to say, all that firepower helped Catholic Central do what was expected all season, which was win a third straight team championship.

The Shamrocks finished with a total of 581 strokes, ahead of runner-up Grosse Pointe South’s 597.

Plymouth took third with a 610, Clarkston was fourth with a 619 while Rockford rounded out the top five with a 622.

It was the definition of a bittersweet moment for Catholic Central coach Mike Anderson, who while celebrating another Finals title with his players also had to come to grips that it was the last time he got to coach a senior class that graduated with three MHSAA championships and a runner-up finish. 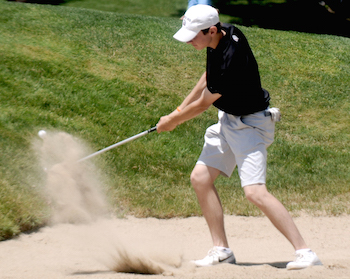 Catholic Central will send three of those golfers to Division I college programs with Piot going to Michigan State, Smith to Georgia Tech and Niles to Oakland University.

“They are my friends and my family, and we will be in touch with them for the rest of their lives,” Anderson said. “It’s a special group.”

Anderson said it was actually the finish three years ago when these seniors were freshmen that proved to be the driving force behind their success.

“That was a tough pill to swallow, and they responded,” Anderson said. “They looked toward that as something they didn’t want to happen again, and it didn’t.”

Niles led the charge for the Shamrocks this weekend, following up a 2-under par 70 on Friday with a 3-under par 69 at a difficult Forest Akers West course.

“It is a strategy course,” Niles said. “You are basically doing all you can to keep it in the fairway. It’s a placement course. That is all it is.”

Kapke had a chance to tie Niles on the final hole and force a playoff, but couldn’t connect on what was roughly a 20-foot putt.