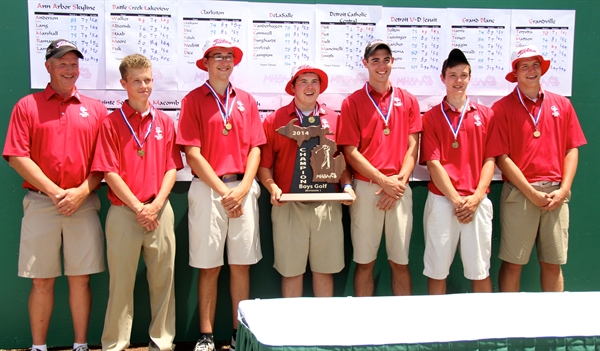 By Mark Meyer
Special for Second Half

The Swartz Creek boys golf team hoisted its first MHSAA golf title since 1967 on Saturday in the Lower Peninsula Division 1 Final at Forest Akers East after finishing one shot better than Detroit Catholic Central, 584-585, and by five fewer than third-place Rockford (589). The Dragons had entered the final round tied with Catholic Central at 293 and ahead of Rockford by one shot.

Swartz Creek senior Ben Zyber shot a 3-under-par 69 to tie for overall medalist honors with a two-day total of 141, while fellow senior Mike Kelley (72-70) was one stroke off the pace at 142. Senior Jack Weller carded a 77 on Saturday to finish at 146, while junior Hunter Hull rebounded from a 91 on Friday to shoot 75 on Saturday.

“We liked our chances coming into the finals,” said fifth-year Swartz Creek coach Wesley Hull. “These three seniors have played varsity for four years, and lately they’ve been playing excellent golf. We’ve been struggling to find a fourth, but (Saturday) we had a junior come in special for us after a bad round yesterday.

“They played their hearts out today. We’re a grinding team, not a country club team. Every hole counts for us.”

Aside from the MHSAA title, the last time Swartz Creek qualified for the Finals was 1969. Hull’s message to his team prior to the final round was fairly straightforward. 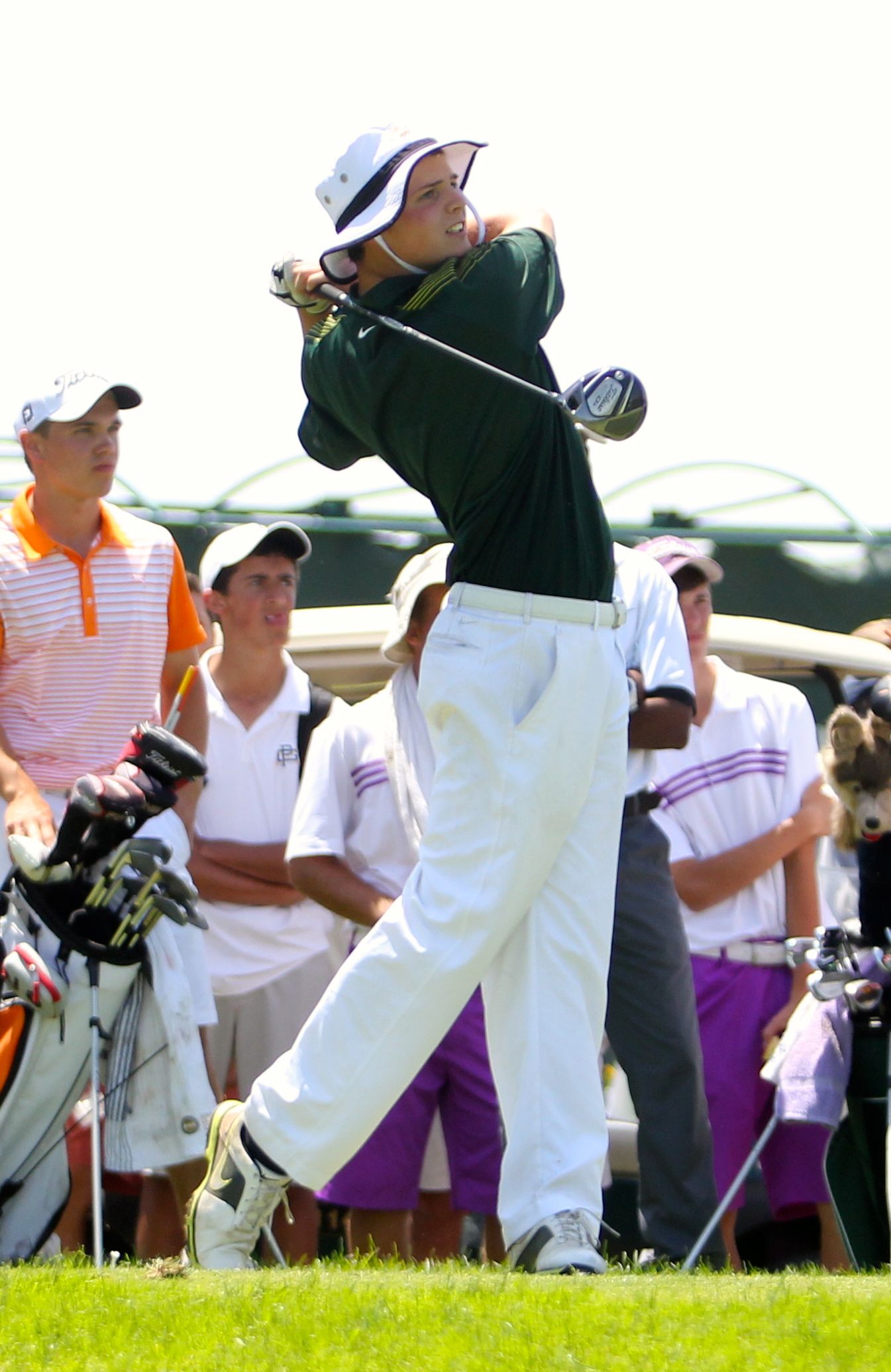 “We have nothing to lose, so let’s go out and have fun,” said Hull, a 1982 Swartz Creek grad who played four years of golf for his alma mater. “This is the chance of a lifetime.”

Midland Dow junior Ben Roeder made the most of his weekend by winning the individual title in a three-hole, five-man playoff over Seth Terpstra of Grandville, Jordan Bohannon of Birmingham Groves, Joel Pietila of Rockford and Zyber.

Roeder made consecutive pars at hole Nos. 1, 9 and 10 to claim the title over Terpstra. On the third playoff hole, Roeder’s gap wedge from 118 yards left him within two-putt range while Terpstra struggled to recover after an errant tee shot.

“I’ve put in a lot of hard work over the past years and knew that one day it would all come through,” Roeder said. “(The playoff) wasn’t as nerve-wracking as I thought it might be. It was great having a big crowd around us with everyone watching.”

Roeder, who reached the MHSAA Finals by capturing one of two qualifying spots in a five-man Regional playoff, kept his head low when Terpstra was attempting to save par on a chip shot from just off the green.

“I’ve watched enough golf on TV where someone made a great shot to continue a playoff, so I didn’t want to get my hopes too high until it didn’t go in,” Roeder said. “I definitely had some help from above because my approach (on the third playoff hole) took a favorable kick into the green.”

Fenton junior John Lloyd aced the par-3, 13th hole on Friday to complete a rare double for a pair of classmates. At the 2013 girls Final in October – also on the East course at Forest Akers – Fenton sophomore Madi Shegos aced the par-3 18th hole.

PHOTOS: (Top) Swartz Creek accepts its first MHSAA golf championship trophy since 1967. (Middle) Midland Dow’s Ben Roeder follows through on a drive at Forest Akers East; he won the individual championship after a playoff. (Click to see more at HighSchoolsSportsScene.com.)