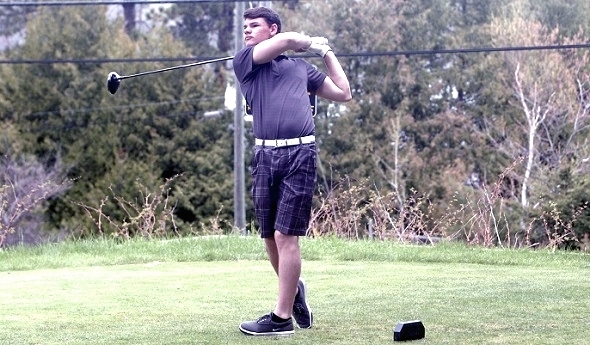 By Brandon Veale
Special to Second Half

HOUGHTON – After the Upper Peninsula's infamous spring of 2013, the golfers at Wednesday's U.P. Division 1 Final should have known to expect the unexpected at Portage Lake Golf Course.

Sun-splashed, windless conditions prime for scoring and a medalist who played in his team's No. 3 slot and hadn't broken 80 all season certainly qualified as unexpected.

The man of the hour was Marquette sophomore Scott Frazier, who fired a 1-under-par 71 to earn the medalist honor and lead his team to the overall trophy.

“I'm gonna remember this for a while,” Frazier said after what he described as the best round of his career.

Marquette posted a team total of 308, 15 strokes better than defending champion Houghton, while playing on Houghton’s home course. It is Marquette's first MHSAA title in five years and sixth since competition in nearly-equal divisions began in 2001.

Three over after four holes, Frazier, who started on No. 4, still felt like he had a good round going just a few holes in.

“My putting was unbelievable. I was one-putting everything, and my drives were straight, too,” Frazier said.

He stabilized his round with a big birdie on the par-four ninth hole, then grinded out seven pars and just one bogey over the next eight.

He missed the fairway right on the long, uphill par-5 18th and had his second swing partially obstructed by a tree. All it did was set up a stretch of golf to remember.

“I took out a 3-wood, I took a three-quarters swing, I put it right under a tree branch and I knocked it on (the green) about 20 feet away,” Frazier said.

He rolled in a straight putt for his eagle 3, then wrapped around to birdie both Nos. 1 and 2. 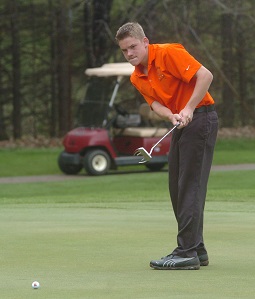 Marquette dropped Frazier's score, a 92, in the Great Northern Conference tournament at Escanaba Country Club last Thursday. But he brought his best game when everything was on the line.

“He's a competitor and a fiery kid,” Marquette coach Ben Smith said. “Part of that turns into frustration sometimes, but he managed it and had a great day.”

Calumet's Reese Lassila, playing with the No. 1's several holes ahead, had no way to know Frazier was catching fire down the stretch.

The 2010 U.P. Final medalist and Copper Country's best golfer all season, he signed for a 74 that was pretty good – but not good enough.

“It's not like I played a bad round of golf. I can't be disappointed,” Lassila, a senior, said.

Lassila started his round with a rollercoaster: bogey on No. 9, par on 10, then birdie-bogey-birdie-bogey.

“I think I really could've heated up on the back nine. But I think every time I made a birdie, I followed it up with a bogey, and it just killed all momentum,” Lassila said.

Lassila finally put two pars together on 18 and 1, then birdied the par-five 2nd hole to get to even-par. But bogeys on No. 5 and his finishing hole, the long par-3 8th, kept him above par for the day. His 74 was still better than his medalist scores in two Western Peninsula Athletic Conference league meets on this course last week.

Key to Marquette's team success was two more golfers in the top five: third-place Jordan Frazier's 76 and just the second 78 of the year from fourth player Mike McGee.

Jordan Frazier, no relation to Scott, arrived from the Las Vegas, Nev., area to Houghton the night before the tournament, but this was no jet-setting trip. Frazier relocated from Nevada to Marquette to play Midget AAA hockey with the Marquette Electricians this season and drove back having not touched a club in four days.

“We won conference and took U.P.'s home to finish off my senior year, which is awesome,” Jordan Frazier said.

The other four Marquette golfers Wednesday were sophomores.

A freshman, Wyatt Liston, led host Houghton to a 323 in an attempt to defend its 2012 championship.

Liston started bogey-double bogey-double, but was even over the next 14 holes for a 78, to tie for fourth individually and all-U.P. honors.

“After the first four (holes), I figured that it can't get much worse, so only good scores from there on,” Liston said.

Sophomore Brendan Longhini scored a 79, one of just seven sub-80 scores on the day.

The other came from Ben Lasecki of third-place Gladstone. The Braves posted a 330. Rival Escanaba was fourth with a 339, followed by Kingsford (348).

After a U.P. prep golf season full of horrors like a Great Northern Conference meet last week played with temperatures in the mid-40s and winds in the low 30s, or a West PAC league schedule during which four meets were rescheduled and two cancelled outright – leading to three meets in three days last week – Wednesday was pleasant enough to put a smile on the faces of even the golfers who turned in a card full of bogeys.

The course was in remarkable shape considering it opened for the season just 15 days ago on May 14, the latest starting date in recorded history for the U.P.'s northernmost 18-hole track.

“(The weather) is awesome for today, but you wish you could've had it a couple other days as well,” Smith said.

PHOTOS: (Top) Marquette's Scott Frazier follows through on his tee shot on the 18th hole at Portage Lake Golf Course during Wednesday's U.P. Division 1 Final. Frazier went on to eagle the hole as part of a 1-under par 71, the medalist score. (Middle) Houghton's Brendan Longhini stares down a putt on the 18th green. He shot a 7-over par 79 for the Gremlins, who finished second to Marquette in the team competition. (Photos by Brandon Veale.)