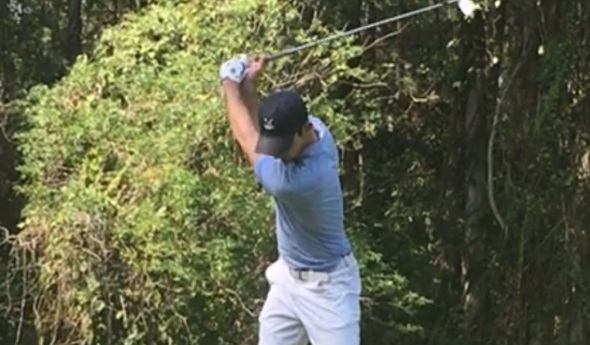 Blaise Vanitvelt has been a dominant force on the golf course this season.

But more importantly, the Flint Powers Catholic senior is enjoying playing with his younger brother and their friends – who are carding great scores of their own.

“Our starting five, we’ve all grown up playing together,” Vanitvelt said. “I just feel good when I’m out there playing. I’m happy with how the whole team is playing, really.”

Vanitvelt, who spent his junior year at Bishop’s Gate Golf Academy in central Florida, was 9-under par through three Saginaw Valley League tournaments, with scores of 69, 71 and 67. He’s leading a team that is frequently shooting in the low 300s, or better.

“We just posted a 299 at Currie Golf Course up in Midland – it’s a very challenging course,” Powers coach Bob Beach said. “I have a very good team this year.”

On the night Powers shot its 299, Vanitvelt led the way with his 67, which tied the best round of his life. His brother Ty, a freshman, and Zack Hopkins each shot 75s for Powers, while Andrew Hayward added an 82. Powers has had several other players figure into the scoring this season, including Joe Coriasso, who is headed to Mott Community College to play next season and was the medalist in the Genesee County Tournament.

Blaise Vanitvelt could see this coming. He and his teammates have put in a lot of time on the course after their regular practices. It’s something that’s been happening for several years.

“We’re all members at Warwick Hills in Grand Blanc; it’s awesome,” Vanitvelt said. “Every day we go to practice for an hour, then we’ll go to Warwick, eat, and practice more. It’s a good practice course. It kind of tests a lot of different stuff for us. The practice facility is super nice there, and the guys from the Grand Blanc team are always there.

“I’ve always been looking forward to this. We go down to Kentucky to play in tournaments together. It’s nice to be on the same team.”

Being a part of this team is a major reason Vanitvelt – who was the No. 1 golfer for Powers as a freshman and sophomore – came back from Florida. It was something he advertised as the plan all along, even if he wasn’t always 100 percent sure of it.

“I told my girlfriend and told my teammates that I was coming back for my senior year,” he said. “Me and my parents had talked about it, and decided that if the academy and me agree that I need to stay, I would.

“But I wanted to be home with family for my senior year.”

A talk with his academy coaches helped validate the decision, and Vanitvelt said he returned to Michigan with a strong summer on the course. It was strong enough that Eastern Michigan University offered him a scholarship. He committed to the Eagles in the fall.

Beach said it was clear that Vanitvelt had improved when he returned, and he wasn’t surprised by it. Not just because of what the golf academy offered in terms of skill building, but because of Vanitvelt’s ability and work ethic.

“A lot of it is heart and desire -- work ethic,” Beach said. “That’s where Blaise excels. He wants to get better, he wants to be the best he can be. Blaise does have the heart for it. He has the desire, and he’s willing to work for it. He’s worked extremely hard.” 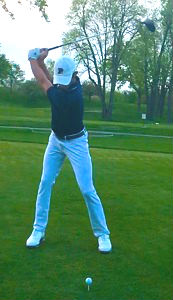 When he came back, Vanitvelt was able to step right back into a leadership role for the Chargers, and he did so not only with an improved game, but also some new learning methods to share with his teammates.

“I always try to help them out with stuff,” Vanitvelt said. “When we go to practice, I talk with coach, and we play a lot of games -- working on mental games and handling pressure. When we go back to Warwick, we always play against each other, and I try to incorporate high pressure games as much as I can. I help my brother out a ton. He does listen to me – sometimes. That’s why I was excited to come back.

“I wasn’t trying to be bossy or anything. We all can play golf on our own, and if I can help out I will. I’m always rooting for them.”

Ty Vanitvelt agreed that his brother has leant a helping hand. But mostly, he’s just happy to have him back.

“It’s really fun playing with him, especially with how good he’s playing,” Ty Vanitvelt said. “High school is different than any other type of golf, so to have my brother there, it helps a lot. When he went to school last year, he learned a lot about golf and his swing. If I’m not hitting it good, I’ll go to him. He’s very informative if I have a question. Very helpful.”

As the postseason approaches, the Chargers have high hopes but know they’ll have to be at the absolute top of their game. They moved up to Division 2 this season, and are in a Regional with St. Johns, East Lansing and DeWitt, the top three placers at the 2016 Division 2 Final. To even get to the final weekend Powers will have to finish above at least one of those teams at The Emerald Golf Course on May 31.

“We always talk about being state champs, but if we all play like we know we can play, it’s going to be hard to beat us,” Blaise Vanitvelt said. “I know our team can put up a good number and threaten them. I think we’re getting to the point, we’ve shot in the low 300s a good number of times, that I think we should be able to contend if we all play as well as we can.”