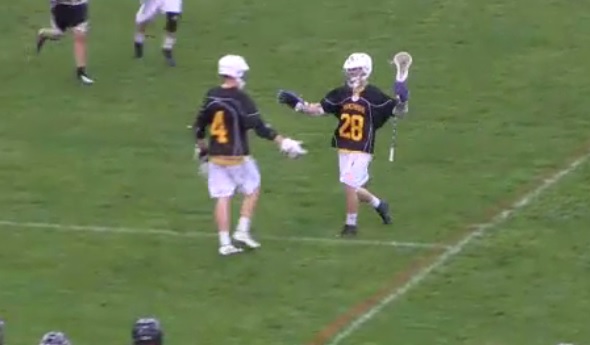 The Haslett/Williamston and Okemos boys lacrosse teams combined for 33 goals in winning Division 2 Regional Semifinals on Tuesday on the Chieftains’ home field.

Both games were produced for MHSAA.tv by School Broadcast Program member Haslett High School – and a collection of highlights from both are below. Click on the headings for each to watch.

Lemanski Spins & Scores Haslett/Williamston cut the DeWitt lead to 3-2 on this second-period goal by Grant Lemanski. The Vikings, which dropped its other two meetings to DeWitt this season by a single goal each time, rallied to win Regional Semifinal, 13-11.

Four-Goal Run for Haslett Haslett/Williamston reeled off four unanswered goals in the second quarter. Here's the fourth tally as Tucker Virkus scores off a pass from Grant Lemanski.

Salisbury Scores Off Steal DeWitt cut the Haslett-Williamston lead to 5-4 by halftime after Christopher Salisbury scored after stealing a pass.

Metevier's Second Goal Jack Metevier ties the game for DeWitt in the third quarter with his second goal of the contest.

DeWitt Goes Up By Three After Three In the closing moments of the third quarter Beau Yabs scores for DeWitt, part of a four-goal run that gave the Panthers a 9-6 lead.

Lounds At Point-Blank Range Haslett/Williamston rallied in the fourth period. Here, Eric Lounds scores for the Vikings from close range to cut the DeWitt lead to one.

Lounds For The Lead Eric Lounds scored what proved to be the game-winner for Haslett/Williamston with just under three minutes to play and the Vikings holding a man advantage.

Lounds Again! Eric Lounds caps the scoring for Haslett/Williamston with his third goal, with about 90 seconds left.

How Quick? How About 8 Seconds Off the game's opening draw, Okemos' Bennett Sherman gets the Chiefs on the board against Portage Northern.

Northern Gets On The Board Portage Northern gets its first goal from Matty Seiferlein, with the assist going to Chace Quezada.

Sherman Fast Break Goal Okemos goes down the field quickly to get Bennett Sherman his fourth goal of the game midway through the first period.

Stakey Scores For Okemos Anders Stakey gets a ground ball in front of the net and scores for Okemos late in the first period against Portage Northern.

Jamison On Second Try After his first shot was deflected away, Cole Jamison gets another chance and scores for Okemos.

Duren Scores Man Down Playing a man down in the final minute of the half, Okemos scores in transition with Joshua Duren getting the goal.

Give The Goal Scorer A Hug Portage Northern gets a nice goal from Joey Leona in the third quarter against Okemos, and the goal scorer gets a hug from the coach coming back to the bench.

Kalleward Scores Northern's Final Goal Portage Northern got its last goal of the game at the end of a man-up situation, with Camden Kalleward getting the tally.