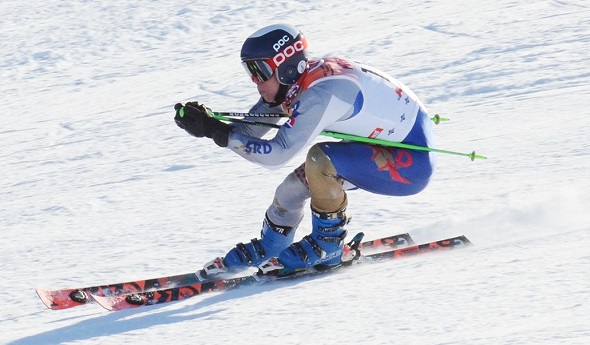 PETOSKEY – Petoskey has been down this slope before.

Two years ago, the boys ski team finished third in its MHSAA Division 2 Regional, then came back two weeks later to capture the Finals championship.

It was the start of a two-year win streak that came to a sudden end Monday when Petoskey placed second to Little Traverse Bay neighbor Harbor Springs in the regional at Nub’s Nob.

So can the Northmen bounce back, like they did two years ago, to claim another MHSAA crown, which would be their seventh in a row? Or do their opponents sense an opening?

“After Monday’s race, there might be a chink in the armor,” Great North Alpine coach Doug White said. “But they’re (Northmen) still the favorites in my book.”

Petoskey coach Erik Lundteigen said his team had “a couple hiccups” in the Regional, but still accomplished its main goal of qualifying for the Division 2 Finals, which will be raced Feb. 27 at Boyne Highlands.

“That was the whole goal of the day,” he said. “I’m happy to qualify.”

Petoskey’s streak of Finals ski titles is tied for the second longest in MHSAA history. The Traverse City boys captured eight in a row from 1988 to 1995. The Marquette girls won six in a row from 1999 to 2004.

“What it (streak) tells me is that we’ve had some good skiers come through the program,” Lundteigen said. “They’ve set the bar and given the kids coming behind them a standard to work towards.”

Reaching that standard is a process, one that begins in practice. Lundteigen is a firm believer in that how a skier trains translates to how he’ll perform on race day.

“Our kids take ownership, take accountability for their performance,” he said. “As coaches, we can do everything to prepare them, but once they push out of that starting gate they’re on their own. There are no time outs. You can’t do anything to help them.

“We like to say you train like you race and you race like you train, so there isn’t a drop off between the two. Some kids get really nervous the day of a race, but that’s what you want to avoid. You don’t want your kids skiing scared or tentative. That’s why we train like it’s a race environment. That’s important.”

“When you ski with that kind of intensity every single day you get used to it,” he said.

Makela teamed with Garret Lundteigen to form a dynamic duo last season. They went one-two in the slalom and one-three in the giant slalom.

“I’ve been in the sport a long time, seen a lot of good skiers, but I’ve never seen a better combination on one team,” Erik Lundteigen said. “They each took 60 high school runs last season and one of the two took first 57 times.” 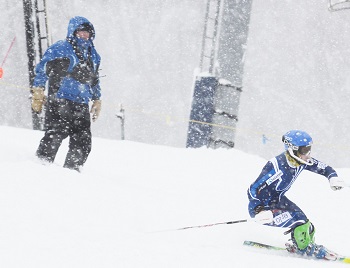 The other was usually second.

“You could pencil them in at the top of every race,” Lundteigen said. “And the crazy thing is there was not one DNF (did not finish). That proves you can not only ski fast, but you can be very consistent if you do it the right way. That, as a coach, is what you have to get your kids to buy into.”

Garret Lundteigen graduated, but Makela is leading the charge this season on a team dominated by underclassmen.

“I’ve been fortunate to be part of three really good teams,” he said. “This team has the potential and skill. We just have to come together on the day that it counts.”

It did not come together as planned at the Regional. One of the team’s top skiers, Ethan Siegwart, was injured in the giant slalom and did not compete in the slalom. Makela, who was second to Great North Alpine’s Finn Husband in the giant slalom, hooked a tip two gates from the finish in his final slalom run and ended up 24th. Makela was leading the slalom after the first run.

“That’s ski racing,” Lundteigen said, “You get about 35 seconds to show what you can do and you’ve got to be clean because races are won by tenths, if not hundredths, of a second. If you make a mistake, it’s unforgiving. I always tell the kids you have to have a short memory. If something goes wrong, you have to be able to let it go because we’re going to need you later.”

Makela’s mishap surprised those on the hill because it seldom happens.

“Mitch is a fabulous skier,” White said. “He always seems to be spot on. For him to have a bobble, wow, because he’s so solid. He’s a great skier to watch.”

But it proves anything can happen in ski racing, and that’s why the MHSAA Finals hold intrigue.

“Petoskey has a great program,” said White, whose team was runner-up to the Northmen a year ago. “They have a strong team year after year after year. Personally, I like going up against them, because that’s where we want to be as a program.

“I think they might be a little down this year. They might be catchable. I think it’s going to be a tight race. You’re going to have to be on your A game.”

Harbor Springs, no doubt, will be buoyed by its Regional win. The Rams, who also won the girls Regional, last won a boys MHSAA title in 2010, just before Petoskey started its streak.

Lundteigen said his team has responded well in practice since Monday’s Regional, and he expects a laser-like focus heading into the Finals.

“We’ll be ready,” he said. “Focus will not be an issue. We just have to ski to our ability.”

As for Makela, the 17-year-old would like nothing better than to make it four MHSAA Finals team titles in four years.

“That would be the icing on the cake,” he said.

And what about another individual title?

“That would be the cherry on top,” he added.

But he knows it will not be easy.

“I’m going to do my best, give a solid effort,” he said. “I would like to win another state championship, but anything can happen. There are a lot of good skiers out there.”