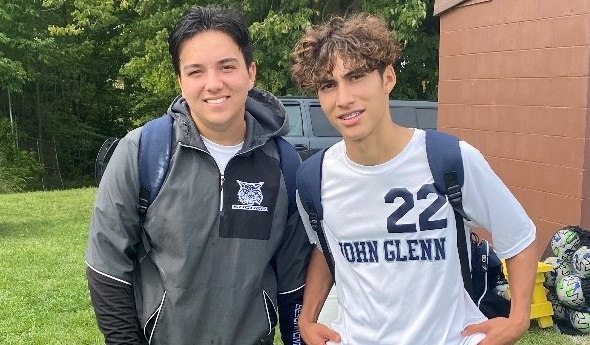 It didn’t take even a half for the Beson-Montoya brothers to show off the potential of their connection this season.

Freshman forward Lawsen Beson-Montoya scored two goals during the first 40 minutes of his debut for the Bay City John Glenn boys soccer team on Sept. 8, and each of those goals was assisted by his brother Lance, a senior.

It was as though they had been playing together for years – except it was the first time they’d been on the field together for a game.

“Honestly, I feel like it wasn’t surprising to them,” John Glenn coach Justin Page said. “I think they almost expected to have some sort of chemistry. The more you play together, the more chemistry you’re going to have with each other. They haven’t been playing with each other, but both of them have watched the other play enough that they know what type of player they are.”

Lance and Lawsen have been playing soccer since they can remember, but with a three-year age gap, they had never suited up for the same team. They’ve even been part of different non-school programs for the past two years, with Lance playing in the Bay Area Soccer Association and Lawsen with the Midland Fusion.

Their mother, Lance said, was most excited about the chance to have both brothers on the same field. But it’s an opportunity that they also are relishing.

“Especially for high school sports, I think the best part about it is playing with your friends and the social aspect,” Lawsen said. “So, it’s great to get to play with him, my buddies and his buddies, too.”

Playing varsity as a freshman was a goal for Lawsen, and something Lance had expected his brother to achieve. While they weren’t playing together, they would often work on their games together, sometimes joined by their youngest brother Landen, who is in sixth grade. During these training sessions, big brother isn’t giving any freebies.

“He doesn’t really cut me any slack when we’re playing around,” Lawsen said. “He’s the older brother; he kind of roughs me up. He doesn’t really go easy on me, because he wants me to be at the level he’s at.” 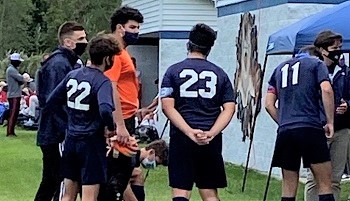 For Page, though, the freshman being a viable varsity contributor was mostly just hearsay until he was able to see the speedster in action.

“Last year, I heard about him,” Page said. “’Oh, Lance’s brother is coming next year and he’s pretty good.’ You don’t know how good he’s going to be until the first kickoff of the first game. You could do all of these soccer drills extremely well, but when games start, it’s completely different.”

The early production only heightened the excitement and showed what the brothers are capable of in the John Glenn attack with Lance playing center midfield and Lawsen playing forward.

“It was awesome,” Lance said. “I kind of knew what my main goal was, and that was send the ball up to him because he’s got great speed. The first one, I just booted it up the field, and he was there. The second was a cross from a corner kick and he headed it in.”

While their natural chemistry is helping them connect on the field, their differing styles of play are too, as both brothers said they complement each other.

“Me and my brother are completely different players on the field – the physical aspect of it,” Lawsen said. “I was the one that was always the little dude on the field; he was more like a brick house. He might not have the speed I do, but he has foot skills like nobody compared to him. I was watching him thinking, ‘I have to get better on my foot skills.’ We’re like Batman and Robin, in a way.”

John Glenn is off to a 1-3 start, but the Bobcats are optimistic about the way they’ve played to this point against what Page said is tough competition.

“I think we’re going to pick it up here coming up in this next stretch,” he said. “I think the starting point we’ve had this year is fairly good, even if the record doesn’t show it. We’re going to start putting together a win streak coming up here, hopefully, and ideally we can put ourselves in a position to win the first-ever boys soccer District championship at John Glenn.”

A strong core of players who return from last year’s Bay County Tournament champions – including Lance – lead the way, and the contributions of youngsters like Lawsen can help make it possible.

Either way, it’s going to be a memorable year for the Beson-Montoya family.

“I knew this year was going to be fun because I knew what my brother could do,” Lance said. “I knew I could trust him and what his strong suits were.”