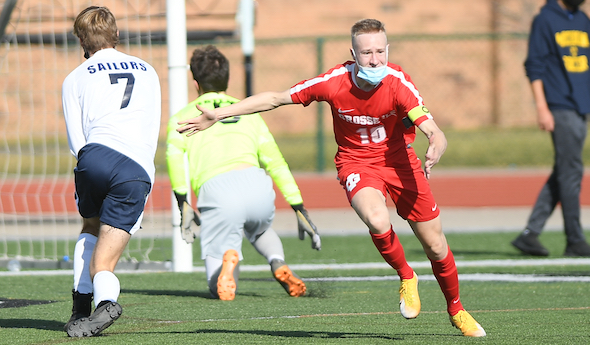 Tanyi’s goal with 26 minutes, 34 seconds left in the second half untied a defensive struggle, and the Red Devils retained their title with a 1-0 victory over the Sailors.

Grosse Ile had won last year’s championship 2-1 in a shootout over South Christian, and the Sailors were looking for revenge.

Instead, Tanyi’s goal – with an assist from sensational freshman Ali Khlaled – gave the Red Devils their second title in their third-straight trip to the championship game. The goal was Tanyi’s 49th of the season.

“I turned around on a goalkeeper clearance and I saw Ali get the ball and I started making a run across the backline, and he put it perfectly on my foot. I just put it in. I got a little frustrated in the first half.’’

Grosse Ile lost goalkeeper Hayden Watson to an injury early in the first half. Junior midfielder Clayton Lafayette was solid in net until Watson returned.

“I went up for the ball, and the sun was in my eyes and he got me right here,’’ said Watson, pointing to his hamstring. “I think it overstretched a little bit, and it started getting better as the game proceeded. 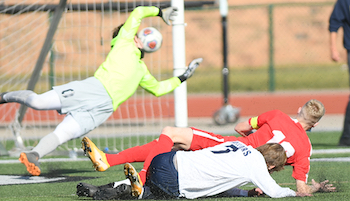 “I did my part. I trusted the guys to do theirs. We executed the game. There were good shots on net. I just had to hold them.’’

When he returned Watson was sensation, stifling every scoring attempt the Sailors were able to mount.

The teams combined for three shots on frame in a first half that didn’t see much offense.

“The first couple of minutes of the second half, things got better,’’ said Tanyi.

Tanyi’s first shot came 10 minutes into the second half. Four minutes later, he scored what proved to be the game-winner for the Red Devils, who finished the year 20-1. South Christian suffered its first loss of the season and fell to 18-1-1.

Both goalies were stellar as Nick Schepers nearly matched Watson in net, except for Tanyi’s goal.

“There weren’t a lot of shots, and that usually happens in the finals,’’ said South Christian coach Jason Boersma. “We gave up one opportunity on the weak side on the breakaway. They buried it. That’s what it takes to win. You get your few opportunities, you put it away, and they did it. So, I’m impressed by them.

Winning coach Jon Evans was impressed with his team being able to beat the Sailors in consecutive years, knowing South Christian would be ready.

“It definitely wasn’t easy,’’ said Evans. “I knew they were going to throw everything at us. We were able to hold on for 80 minutes. If you look at the start of the season, I felt like this could have been the matchup on this date. It ended up being that way.

“We started five sophomores and a freshman today. We battled. These kids play at a pretty high level. They bought into their roles, that they filled in from the eight starters they lost last year on the team that won in 2019. Kudos to all the boys. They worked their butts off for 80 minutes straight, and they deserve this.’’