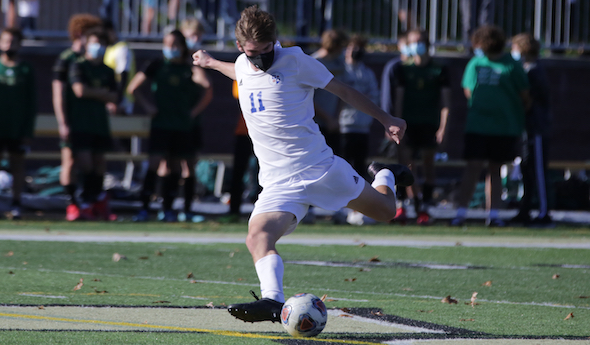 COMSTOCK PARK – Jack Leuker had a vision three years ago, and Saturday afternoon on a sun-soaked afternoon in Comstock Park, that vision became a reality.

Leuker, a senior midfielder and captain, scored on two penalty kicks – including the game-winner late in the first portion of overtime – to power Detroit Catholic Central to a 2-1 victory over Traverse City West for its second Division 1 title in the last four years.

The last one came in 2017, when Leuker was a freshman observer.

“When I watched my freshman year and we won on a penalty kick, I thought: ‘I could see myself doing that in two or three years,’” said Leuker, one of four senior captains for the Shamrocks. “Fortunately, I got the chance to do it today.”

The win capped an unbeaten season for DCC (13-0-2), which had about 40 percent of its games wiped out by the COVID-19 pandemic.

While the Shamrocks needed to come from behind to defeat Berkley in the Regional Final and Mattawan in the Semifinal, this time they never trailed against a Traverse City West team which was hoping to improve on its 4-1 loss to Troy Athens in the 2019 Final.

DCC controlled play and had several scoring chances in the first half, including a flying header by senior forward Landon Lodato which sailed just over the goal. But the first 40 minutes ended in a 0-0 tie.

It remained scoreless until a little over six minutes into the second half, when a handball on the Titans set up the first penalty-kick opportunity for Leuker.

The Titans’ keeper went to his left, leaving space on the left side of the net for Leuker to open the scoring.

“There were some nerves there, for sure, but I just picked my spot and trusted it,” Leuker said.

It looked like that 1-0 lead might hold up, before the Titans dug deep and started to apply more pressure on Shamrocks senior keeper John Browning during the game’s final 15 minutes.

After TC West’s Josh Hirschenberger was denied a good scoring chance by the DCC defense at the 13:05 mark, the Titans were awarded a penalty kick after a holding call in the box. 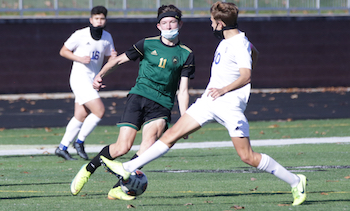 That set the stage for Titans junior Colin Blackport, who entered the game with 19 goals and 29 assists, and he showed how he was able to rack up those gaudy offensive numbers by firing a bullet into the left side of the net to tie the game.

Eighth-year DCC coach Gene Pulice, whose team has become known for rallying from behind, knew his team wouldn’t panic after giving up a lead, either.

“We knew we were going to get scored on – that’s the mindset we go in with, so when it happens, we don’t worry about it and just go out and get it back,” said Pulice, who is assisted by Mike Stratton and Brent Wasik. “That’s the attitude that we have lived on all year long.”

The game then headed to overtime, but not before Titans senior all-stater Tony Gallegos almost single-handedly won it for his team

With time running down, Gallegos took off on a charge and used his speed to get around the Shamrocks’ defense and fired a shot which reached the back of the net about two seconds after time had expired.

That set the stage for Leuker’s second penalty kick goal, this one coming after a tripping call with just 19 seconds remaining in the first overtime session. Leuker went the other way this time, sending the game-winner into the right side of the net.

From there, Pulice left matters in the capable hands of his aggressive defense, which allowed less than one goal per game this season – 13 goals in 15 games, to be exact.

“Our goal every game is to be the best with our feet and also the most physical team,” said Shamrocks senior defender and captain Andrew Memmer. “That’s the CC style of play. That’s the reason we’ve had an undefeated season.”

TC West (22-2-2) didn’t go down without a fight, working for a pair of corner kicks in the final four minutes of overtime (including a kick at the 3:20 mark which sailed tantalizing past the goal mouth), but sixth-year coach Matt Griesenger’s team was unable to score again.

That led to a typical title celebration after a very non-typical season, perhaps the first time that a player has cited Zoom meetings as a reason for a state championship.

“I think the reason we were able to go undefeated and find a way to win every game is our discipline,” explained Memmer. “I mean, when we were shut down, we were doing online workouts on Zoom. I don’t think many teams have the discipline to do that.”