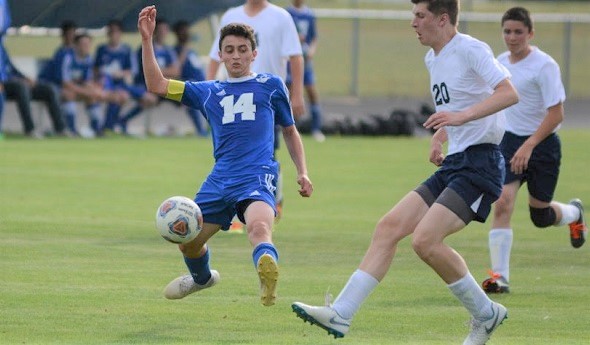 Erik Seebeck was a manager for the Gladwin boys soccer team in 2015 when it advanced to the MHSAA Division 3 Semifinals.

That team and its postseason run made quite an impression on the then-eighth grader.

“It was a good experience. I really enjoyed it,” said Seebeck, now a senior sweeper and captain for the Flying Gs. “I learned a lot from being around them and watching how they all responded even when they were down – just never giving up and always giving their all.”

That 2015 team gave Seebeck – and the Gladwin soccer program – something else: the start of what is now a 55-match conference win streak. Gladwin has not lost a Northern Michigan Soccer League game since the conference tournament in 2014.

“We like to set goals at the beginning of the season, and we like to talk about where we want to reach,” Seebeck said. “We want to keep this streak going. We have lots of talent this year, and we’re not having a drop off. We’ve had guys step up and fill the seniors’ positions. We talked over our goals, and we kind of wanted to keep that continuing, to see how far we could make it on that streak.”

Gladwin, a member of the Jack Pine Conference in its other sports, competes in the South division of the NMSL. The league includes schools as far north as Cheboygan and as far west as Big Rapids Crossroads.

Gladwin’s streak includes four straight victories in the league’s conference tournament, which consists of the top two teams from each division at the end of the season.

This season, Gladwin is off to a 7-0-1 start, which has included 7-0 and 8-0 conference wins against Clare and Big Rapids Crossroads, respectively.

Jonathan Grijalva, a senior forward and captain who is in his third year on the Gladwin varsity team, admitted there’s some pressure that comes along with the streak, but added that it doesn’t define the team.

“Obviously we’d like to keep that going, and there is pride there,” Grijalva said. “But if it ended, I don’t think we’d be horribly upset, because we’re a successful team. And even if we didn’t keep that record going, we just like to have fun, too.”

This year’s team has built another streak all its own, not having allowed a goal through its first eight matches. While the Flying Gs are having no problem putting the ball in the net, having scored 37 goals, Smalley said the strength of the team is its defense and the collective effort the entire team puts into keeping the ball out of the net. 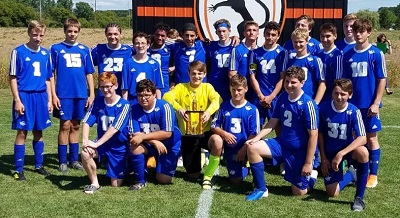 “Our entire team is playing defense,” Seebeck said. “Everybody is getting back, and everybody is helping out on defense. Our four guys in the back (Seebeck, Wilson Bragg, Cal Woodbury and Kurt Landenberger), we’re all communicating great and letting each other know what we have to do. Our midfield is coming back and covering those give and gos. That helps tremendously when all of your team comes back to help on defense.”

The hope now for Gladwin is that this early success on both sides of the field can translate to success not just through the regular season, but into the postseason as well. Because while the Flying Gs have not lost a conference game since 2014, they also haven’t advanced beyond the District tournament since 2015.

“The postseason hasn’t been as kind to us as the regular season,” Smalley said.

In order to try and change that, Smalley said he has attempted to beef up the nonconference schedule throughout the years. This past weekend, Gladwin won the Alma Tournament, defeating the hosts, as well as Birch Run, while playing to a scoreless draw against Big Rapids.

“Close games definitely put things into perspective for everybody,” Seebeck said. “We were in the Alma Tournament, and we played Big Rapids and played them to a 0-0 tie, and they had some good players and good passing that kind of opened up to some of our guys what very skilled teams are going to look like when we go into the postseason. It definitely shows you what your limits are.”

There’s a belief among the players that this year’s team can end the recent postseason woes and hopefully catch up to the 2015 team that set them on their current path.