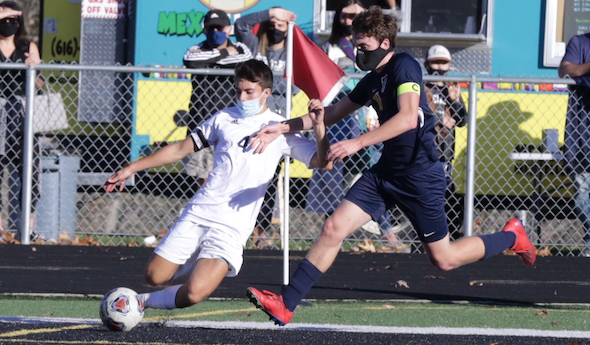 COMSTOCK PARK – Eron Sylejmani is considered one of the best high school soccer players in the state and in the running for the annual “Mr. Soccer” award.

But on Saturday, the Richland Gull Lake senior forward proved he might also be the most resilient.

Despite getting stymied over and over again by a dynamic performance from DeWitt senior goalkeeper Patrick Woodbury, Sylejmani never gave up or got discouraged and finally broke through with the winning goal early in the first overtime session to give the Blue Devils a 1-0 victory in the Division 2 Final at Comstock Park High School.

“I saw that the keeper was leaning a little to my right, so I shot it bottom left and, luckily, it went in – unlike the 500 other ones,” said Sylejmani with a wry grin, exaggerating only slightly.

Gull Lake was on the attack basically from the start, with DeWitt Renwick, AJ Boucher and Ryker Corstange also having their chances. But the back line of the Panthers’ defense (particularly Woodbury in goal) was the essence of bend-but-don’t-break.

“We just needed one, but you start wondering if it’s really going to happen,” said Streitil, who is in his sixth year. “They could have gotten frustrated with each other and they could have started yelling at each other, but instead they came together.”

After Sylejmani’s goal, off an assist from Renwick, at the 8:00 mark of the first overtime session, DeWitt started pressing and had some of its best scoring chances of the afternoon over the final 18 minutes.

Senior Zach Stephan lofted a perfect free kick right in front of the goal, which was headed just over the crossbar, in the first overtime session. Then the Panthers had another great opportunity off a corner kick with 4:00 remaining in the second portion of overtime, but freshman Gull Lake keeper Braden Minehart smothered it on the ground. 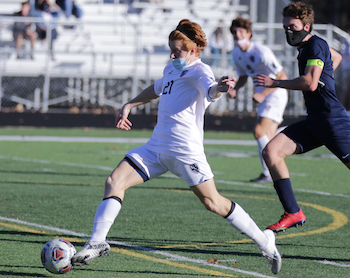 “Give credit to Gull Lake, they pressed us and we were never able to play quite like we wanted to – maybe a little bit there at the end,” said sixth-year DeWitt coach Joe Ishraidi, a former standout player at DeWitt who has brought the program back from a sub-.500 season just two years ago. “It turned out to be a season that we will remember forever.”

DeWitt (13-5-2) was in the Finals for the first time in school history, an incredible run for a team which caught fire after finishing third in the Capital Area Activities Conference Blue.

Saturday’s was actually the first outright boys soccer state championship in Gull Lake school history, as the first two titles were shared when those Finals ended in draws in the pre-shootout era. The Blue Devils shared Class B titles with Madison Heights Bishop Foley in 1988 and Detroit Country Day in 1993, and finished runner-up in 1983.

Gull Lake had an outstanding team last year, which entered tournament play undefeated and ranked No. 1, before getting shocked by Coldwater in the District Semifinals and finishing 17-1-1.

That loss motivated this year’s team, Streitil said, and propelled it to the state championship level.

“These guys have ignited our community,” said Streitil, who is assisted by Colton Johnson, Jimmy Prescott, Sebastian Rodriguez, Dan Tennant and Corey Dryer. “We’ve had grandparents at our games this year that had never gone to a soccer game before.

“At a time of COVID, it has given our town something to be excited about.”