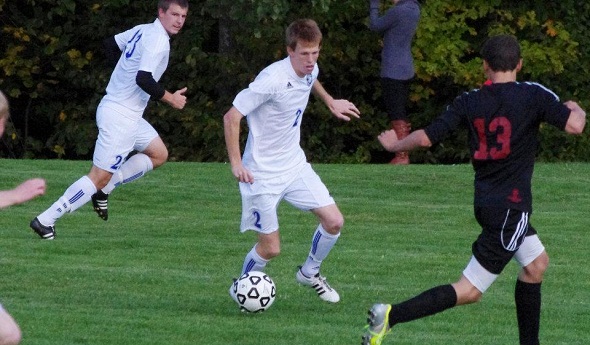 Their games were fueled by typical sibling rivalry. To Lee Chatfield, the endings were humorous. To his two little brothers, more like cruel.

Sixth-grader Paul and fifth-grader Aaron regularly would take on their senior brother on a makeshift soccer field in the family’s back yard. They’d play games to 10, the two youngest brothers against a standout on the Burt Lake Northern Michigan Christian varsity.

Lee would let them score nine goals before dribbling circles around his siblings. Paul and Aaron would yell at each other to somehow block Lee’s path, but to no avail. Inevitably tears would fall.

“Maybe I was being a baby,” Aaron said. “He would let us get up and then come back and beat us, and he’s laughing while we would just cry.”

But on that backyard soccer field, Aaron Chatfield also learned how to compete. And there’s no question it paid off during one of the most accomplished careers in MHSAA soccer history.

Chatfield scored his 173rd career goal on Sept. 21 against Elk Rapids. He’s pushed that total to 178 heading into this weekend’s games against Fife Lake Forest Area and North Muskegon. A Second Half High 5 recipient this week, Chatfield has 45 goals this season after scoring a career-high 56 in 2011.

“Up until seventh grade, he couldn’t lose a game and not cry,” said Lee, also Northern Michigan Christian’s coach the last three seasons. “It built a little chip on his shoulder.

“But it’s always been God-given (talent). And Aaron has worked tremendously hard to hone the gifts God has given him.”

All in the family

To set the record, Chatfield passed 2009 Dearborn graduate Soony Saad, who went on to lead the NCAA with 19 goals as a freshman at the University of Michigan in 2010 and now plays for Sporting Kansas City of Major League Soccer.

Chatfield learned about Saad as he was pursuing the record, but admitted he isn’t familiar with most of the others on the MHSAA all-time goals list.

However, there are a few he knows better than anyone – there are five Chatfield brothers total, and three more also are among the most prolific scorers in MHSAA history.

Entering this season, Nathan Chatfield was second on the career goals list with 170, scored from 2001-04. Spencer was tied for 12th with 121 goals from 1998-01. Paul is tied for 19th with 109 goals during a career that ended last fall. Lee was a sweeper, so his game was stopping goals instead of scoring them – but he did a fine job at that as well.

Aaron, being the youngest, tried to pick up certain qualities from each. Nathan, the second-oldest, was “a natural goal-scorer, probably the fastest. He would just outrun people,” and holds the MHSAA record with 272 career points, although Aaron needs only five more to match him.

Oldest brother Spencer “could dribble like no other.” Paul was “built differently than all of us … but he could double scissor you up. He’s very physical.” Lee was “more like me; he was the best defender,” and Aaron played in the back from third through eighth grades.

“I would like to think I’m more of a mix of everybody,” Aaron concluded.

“Almost everything I do, I’ve learned from them. The way that they play, people say all the time that I remind them of my brothers.”

He can play with anyone

The best compliment – and a strong representation of how Chatfield matches up statewide – comes from Petoskey coach Zach Jonker.

The Northmen have made two recent trips to the MHSAA Finals and regularly load up their schedule with top-ranked teams from Divisions 1 and 2 including East Kentwood, Rochester Hills Stoney Creek, Warren DeLaSalle and Bloomfield Hills Lahser. Petoskey also regularly scrimmages Northern Michigan Christian.

“He’s the most dangerous individual we’ve faced all season. When he received the ball against us, we kinda held our breaths,” said Jonker, who also knows the Chatfields well through the club program. “He has a great combination of speed with the ball and power. He has great balance and he’s tough to knock off the ball. And he’s got another gear; he can explode by (defenders).

“We double teamed the guy, and we haven’t had to give any individual we’ve played all season that kind of attention.”

Chatfield joined an Eagles varsity in 2009 that had only three seniors. Not only did he start immediately, but he also was named a co-captain.

Last season’s team became an incredible story, advancing to the Regional Final on a 24-game winning streak before losing for the first and only time of the fall, 2-0 to eventual MHSAA runner-up Muskegon Western Michigan Christian. Chatfield scored in every game but that last one.

He also has cut his teeth playing for his club team, the Petoskey Lakers, and his teams are a combined 24-2-2 during their last three seasons playing in the Michigan State Premier Soccer Program. Chatfield scored 1.9 goals per game last club season, down from 2.5 the season before. There is interest from a number of colleges, and he is looking at options of all sizes, from Division I to NAIA.

Chatfield has logged plenty of miles to see strong competition, and one game as a sixth grader left Lee with the impression that big things were on the way.

“There was one moment when I was standing on the sideline, and he did a spin move and split two defenders with a scissor. At that moment, I thought this kid has got it,” Lee said.

“He’s always been tenacious. He’s a natural-born competitor. He’s anything but a prima donna. He just wants to win.”