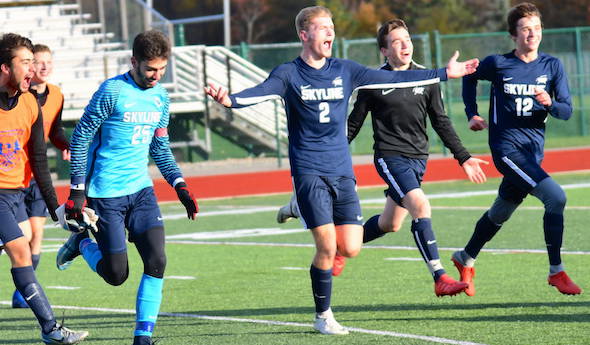 But instead of from the sky above, it came on the field from Ann Arbor Skyline.

In a game seemingly destined for overtime and a shootout, Skyline unexpectedly struck quickly, scoring two goals in a span of 58 seconds late in the second half to earn a 2-0 win over East Kentwood.

It was the second Division 1 title since 2015 for Skyline, and the first time in six MHSAA Finals appearances since 2007 that East Kentwood didn’t take home the championship trophy.

The game was scoreless until there was 9:42 left, when Skyline junior Jamie Balms sent in a service to the top portion of the box.

Sophomore Gabe Kellman flicked it with his foot deeper into the box to junior Chris Emerson, who with his back to the goal did a mini bicycle kick and flicked a shot with his right leg into the goal to make it 1-0 Skyline.

“I turned my back and hit it,” Emerson said. “It was crazy. I couldn’t even explain it.”

It didn’t take long for the Eagles to add an insurance goal.

Just 58 seconds later, junior Oskar Shiomi-Jensen sent a cross into the box, and junior Bryce Schaner headed it into the goal to make it 2-0 Skyline.

“We knew it was going to be a set piece or some sort of breakdown,” Skyline head coach Chris Morgan said. “We just told them before the game started and throughout the game. We said to ‘trust, trust, trust.’ And we got it. That was all it was.”

It was a stunning offensive outburst after a game that mostly featured stout defensive play and few quality scoring chances. 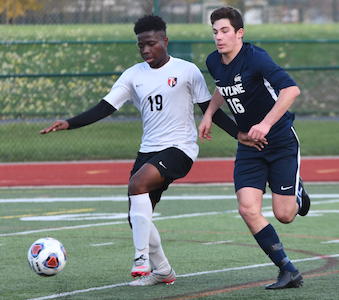 That was expected going in, since Skyline had allowed just 11 goals on the season, while East Kentwood entered with five consecutive shutouts.

Skyline remained firm defensively despite dealing with a rash of injuries throughout the year that cost the Eagles six starters.

But ultimately, Skyline’s depth on the backline showed through.

“They did an outstanding job,” Morgan said. “We didn’t make any subs in the back throughout the whole tournament. Hats off to those boys.”

For East Kentwood, it was definitely a strange feeling taking home the runner-up trophy.

The Falcons had won all five of their championship matches since 2007, the last a shootout win over Troy Athens in the 2016 Final.

“We fell asleep on a set piece, and obviously Skyline is very good on set pieces, so you have to give them credit,” East Kentwood head coach John Conlon said. “Soccer is a game of inches, and they won the inches when it mattered.”

Conlon also praised the Skyline defense, which he knew would be a challenge before the game – and it played out that way.

“It’s hard to generate much against their team,” Conlon said. “It was a heavyweight bout, and two guys are trying to land punches. They finally landed a punch, and we couldn’t get one off.”