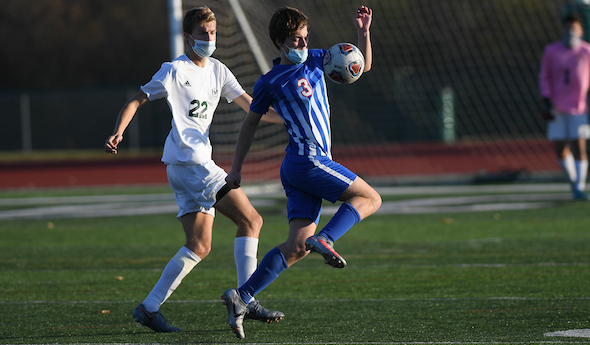 Both were primed to win a boys soccer title for the first time.

In dramatic fashion senior Francisco Cabrera made sure it would be Lenawee Christian, turning a great rush down the right sideline into a goal by senior Gabe Henley with 22 seconds left to stun Calvin Christian and give the Cougars a 2-1 victory.

Battling sore shins, Cabrera made it happen when his teammates needed it most by sending a pass into Henley to set up the go-ahead goal.

“I saw the left back make the runoff. I knew it was time,’’ said Cabrera. “Big players show up in big moments. I think I was lucky a teammate got on that one. I was going to try and look for a shot. I just put it out there, and a teammate came through. I have no words for when I saw the ball go in. Glory to God. We deserved this. The team and the school.’’

Henley scored both goals for the winners and kept an eye on Cabrera while he was making his run down the field.

“It was beautiful; his hustle along the outside,’’ said Henley. “Once I saw that he had beaten the defenders and I knew I was positioned backside … it laid out perfectly. I couldn’t have asked for anything better; right to my foot and be able to tap it in. I was hoping we could finish it there. We’ve played one time 110 minutes, and it’s just grueling. We just knew we could finish there.’’

Calvin Christian kept the pressure on in the early going and converted when Abraham VandenHoek directed a header into the net with 21 minutes, 2 seconds left in the first half on an assist from Andrew Heeringa to give the Squires a 1-0 lead. 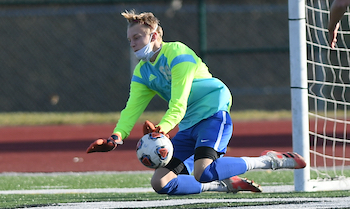 Meanwhile, Lenawee Christian’s offense was being shut down by the Squires. In the first 25 minutes, the Cougars (16-2-1) had one shot on goal.

But 38 seconds into the second half, Henley fooled the Calvin Christian keeper and rolled in a shot to tie the score, 1-1. The goal was just the third allowed all season by the Squires.

“We really needed something to get going,’’ said Henley. “Anyone can score in the beginning, but we’ve kept our cool. We’ve been scored on, one of two goals, and we’ve come back. We were confident we could come back. We needed that.’’

“Let’s Go Blue’’ blared from the Lenawee Christian stands as the Cougars carried the momentum with time ticking away, although Calvin Christian just missed netting a second goal with five minutes to play.

“I felt like we played a little scared at the beginning,’’ said Lenawee Christian coach Nate Sharpe. “The halftime talk was you have to go out and play the way that got us here. You can’t be scared. They stepped up and did it for most of the half. We got an early one in that second half to bring it up. That gave them hope and belief that they could do it. Then it was just a battle back and forth in the midfield.

“We caught them on a transition at the end of the game. They were all up, the ball bounced up. We played it up to Franny (Cabrera); Franny beats them down the line and plays a great ball to Gabe.’’

The loss was the only one this fall for Calvin Christian, which finished 19-1-2.

“We play a lot better,” Squires coach Karel de Waal Malefyt said. “This was our first time here, and it showed.’’