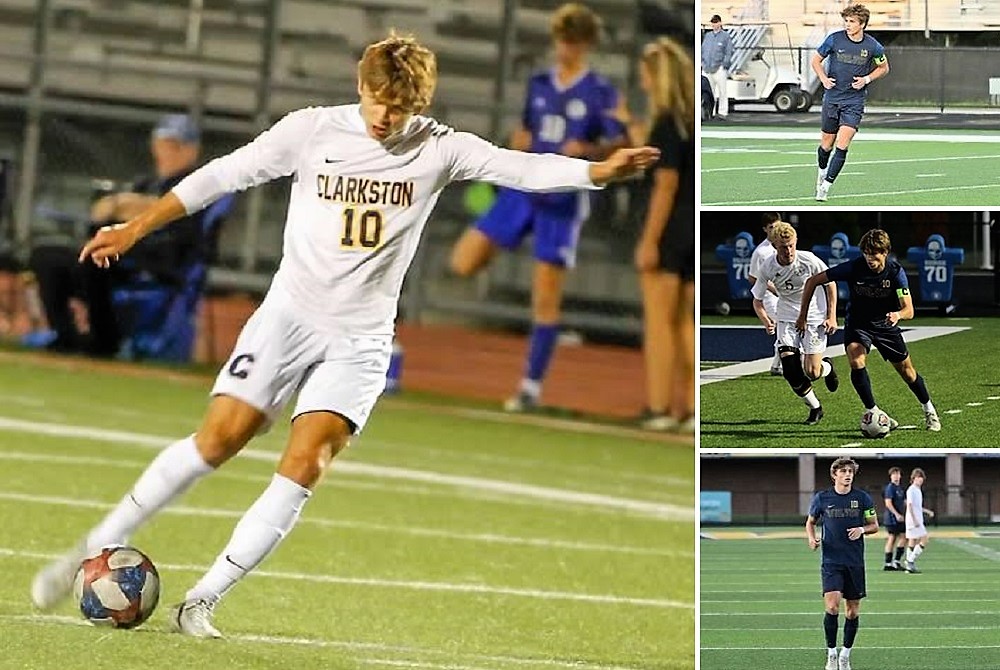 CLARKSTON – It would be a bit much to say they have been full-scale recruiting pitches for Clarkston senior Richie Ludwig, but let’s just say there have been strong nudges each time the high school soccer season has rolled around.

Before each season, Ludwig has gotten some minor overtures from coaches at various academies trying to lure him to their organizations and away from high school soccer.

And these aren’t some low-key academies, as several are affiliated with Major League Soccer organizations.

“I usually get a text or two and calls from a couple of different coaches,” he said.

The coaches essentially are saying, “Hey, if you happen to change your mind about that high school thing, you know where to reach us.”

Each time, Ludwig has essentially responded saying, “Thanks, but no thanks.”

You certainly can’t blame the academies for trying.

A wondrously skilled and fast player, Ludwig should be on the short list of Mr. Soccer Award candidates this year, if not the favorite.

Entering Tuesday he had 13 goals and nine assists already this season, and he’ll play next for Michigan State.

But the fact he’s in the midst of his fourth year of high school soccer is news in itself, given his talents.

Besides just loving high school soccer and playing with his friends, there are two other reasons why Ludwig has shunned prominent academies.

One, he plays on a club team, Nationals Soccer Union based out of Shelby Township — where one of the coaches is his dad, Rich — that has traveled the country to tournaments and events.

“Really, I’ve gotten all the scouting and recruitment needed at my club nationals,” Ludwig said.

Second, Clarkston plays in what annually is one of the state’s best leagues, the Oakland Activities Association Red, where nightly there are games against other prominent club standouts, future college players and state-ranked teams.

It’s not like he’s missing out on developmental opportunities in high school.

“What I get out of high school is a good social environment while also getting to compete with a couple of my buddies,” Ludwig said. “Even though it may not be at a level as high as a club team is playing at, I can still push myself to be able to play at the standards I want to play at the next level.”

Ludwig primarily plays as an attacking midfielder or a center forward, and while he is a natural goal scorer, Clarkston head coach Ian Jones said he’s a creator wherever he is on the field.

Even if he is assigned to be in the middle of the field, Ludwig will go wide to create numerous scoring opportunities.

“He almost creates more opportunities by not being involved,” Jones said. “He finds spaces. He creates space for other people, so his understanding of how to create space not just for himself, but other people, is the biggest improvement I’ve seen. He just has a knack of seeing things before they evolve.”

Ludwig said he has worn a Spartans jersey “ever since I came out of the womb.”

“I’ve always wanted to go there,” he added.

Before that though, he hopes to leave high school by making history for Clarkston.

This year marks 15 years since the best team in Clarkston history made a run to its only MHSAA Finals in 2007, where the Wolves lost in the Division 1 championship match to East Kentwood.

Ludwig said he and other players have turned into historians a bit this year, studying up on that team and hoping to go one step farther so they can lay claim to being the best in school history.

“Our coaches have talked to us about some of those things they did,” Ludwig said. “The little things off of the field even. They have just told us the little things we need to pick up on to make that run.”

If a run at a Finals title doesn’t happen, Ludwig won’t have any regrets about sticking with high school for all four years given the memories he’s made and what he’s accomplished.

But if the Wolves do contend, it’ll make turning down those small overtures from academies worth celebrating more than all the goals he has scored combined.

“He’s a pretty loyal boy,” Jones said. "I think he has the ambition to do something in high school that hasn’t been done before.”