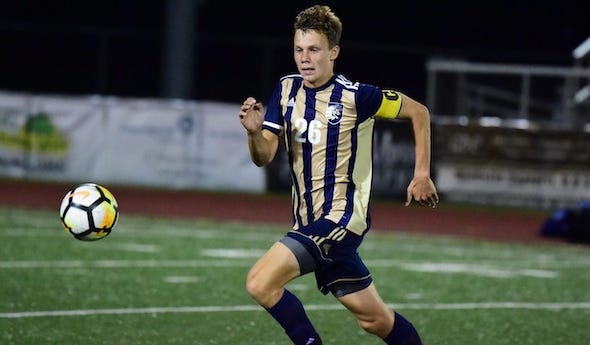 Mason scored his first and second goals of the season to help South Lyon to a 2-2 draw with Walled Lake Western on Sept. 19 that clinched the Lakes Valley Conference regular-season title for the Lions – their first league championship since 2007 – and earned Mason the MHSAA “Performance of the Week.”

South Lyon graduated a number of contributors from the team that finished 9-7-3 and fifth in the league last season, but Mason – a rare sophomore team captain – has been a major part of the rebound and continued ascension. The Lions are 9-1-5, their only loss to Birmingham Seaholm when Mason wasn’t able to play. South Lyon gave up four goals that game; otherwise they’ve allowed just eight over 14 games with Mason manning the center back position.

Mason also is a standout swimmer; he was part of league champions in the 200-yard medley and 400 freestyle relays last season. He also carries a 3.97 grade-point average and has interests in math and science, although obviously he has a lot of time to consider what he might study after high school – and a lot to still accomplish for the Lions over the next three years.

Coach Brian Elliott said: “His two goals came at the most perfect time when we were playing Walled Lake Western for the conference championship. He's a great soccer player, but obviously a great leader as well. In 14 years of coaching boys and girls soccer teams, I've only selected sophomores as captains twice. … Josh is the perfect blend of composure and aggression. He's tenacious when defending, but extremely composed when on the ball offensively. The only game we've lost was the one Josh wasn't present for. I'm very excited for what the rest of high school holds for Josh and can't wait to see where he plays after high school as well.”

Performance Point: “After the second goal, being able to celebrate with all of my teammates, it was super cool to experience it,” Mason said. “I was feeling really good before the game, I wasn’t going to lose, so (my scoring surge) just kinda happened. The one (goal) was a chain and the other was a corner – I just went up for it, I saw it coming, and I wasn’t going to miss this one. I felt like I hadn’t been doing my job on the corners all year. I felt like I needed to score this one. … We have a bunch of really good seniors – they’re super good guys – and it’s cool to win the league for them their senior year.” 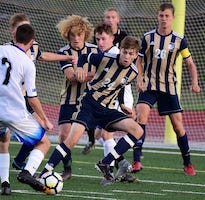 Captain’s log: “You see all the JV kids and all the freshman kids looking up to you. That’s a really cool spot to be in. I have really cool senior captains to learn from who I want to model my next two years of being a captain after because it’s really going to help the team to be able to do that three years in a row. … Our team has jelled pretty good, and everyone listens to everyone. Everyone gets to speak, and everyone’s ideas matter."

D-E-F-E-N-S-E: “Communication – I step to the line and do a lot of work back there, but I think the other guys really respond when we talk to them and they step up. That game (I missed), we were just missing the communication piece and they couldn’t work together on the back line. I felt really bad missing that game.”

Pool pays off: “I overextended my knee my seventh grade season. I needed to stay in shape, but I couldn’t do running or anything (similar) because of the pounding, so I tried swimming. I kinda went out there and just tried it and ended up really good at it. I just kept going and ended up on the high school team. I don’t really love it during the season, but at the end of the season getting back on the soccer field, I’m in crazy good shape. I feel so good and I never get tired, so I love it then. But at 4 in the morning, I’m like, ‘Why am I putting myself through this?’”

Underdogs rising: “I like Man U. I like Everton too. I kinda like an underdog team. I feel like they are normally underdogs. They try to compete with the big teams every year. I respect them for that. … I think that is us. This is the third year in a row that we’ve drawn Brighton and (Detroit) CC in our District, and we are that little team trying to compete with the big teams that are consistently good. I think we are getting close to that. I think we’re getting a lot better – just from last year, I see a lot of improvement on the team.”

PHOTOS: (Top) South Lyon's Josh Mason moves the ball upfield during his team's win this week over White Lake Lakeland. (Middle) Mason (26) and his teammates wall off the goal. (Photos courtesy of the South Lyon Herald.)